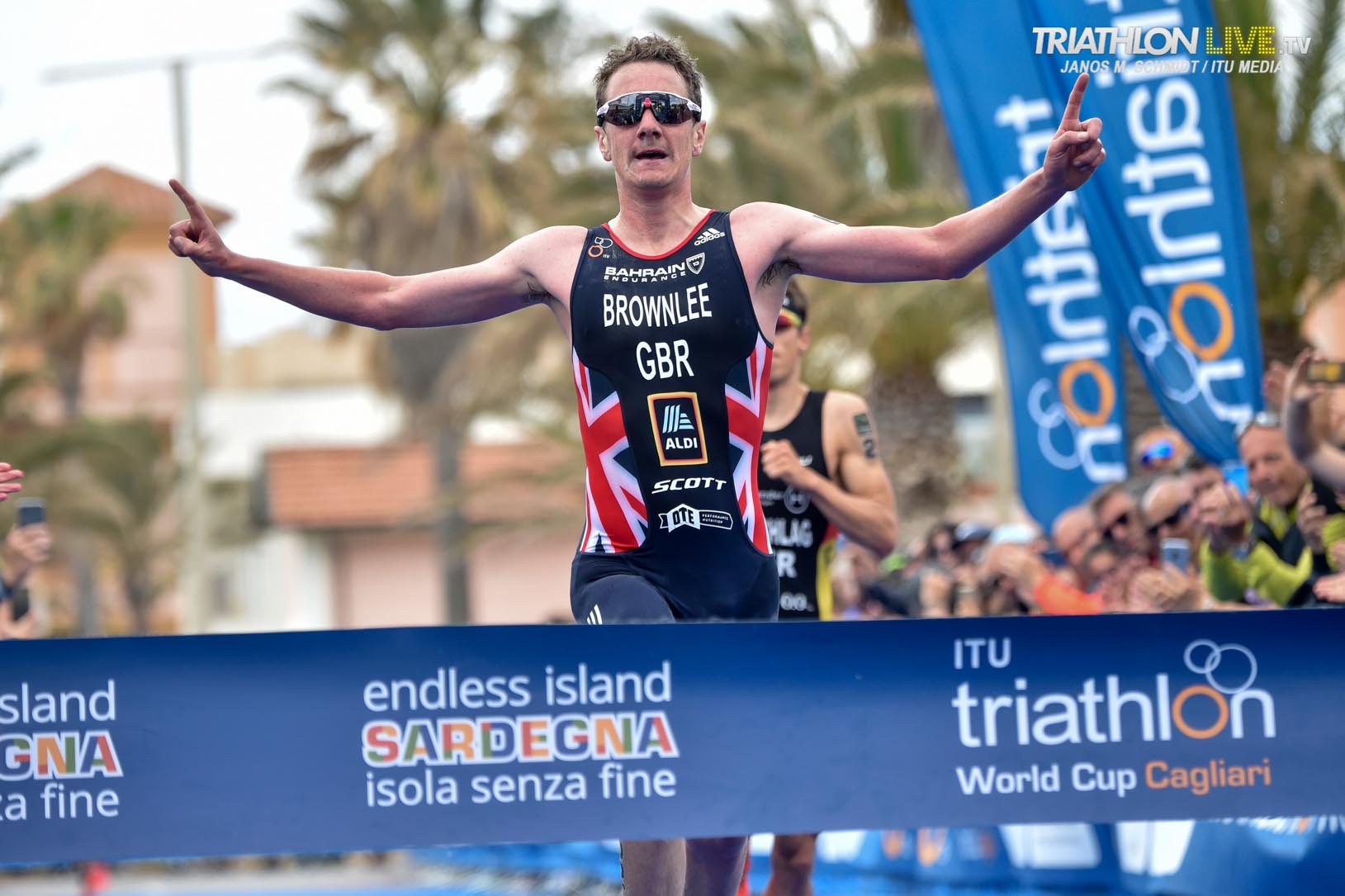 Two-time Olympic and World Champion Alistair Brownlee and compatriot Sophie Coldwell delivered two incredible performances in Cagliari to take the gold medals back to Great Britain. It was a first race over the sprint distance since 2015 for Brownlee, who was able to summon a final drop of power to out-sprint Justus Nieschlag (GER) to the tape, USA’s Kevin McDowell third. In contrast, Coldwell had already done the hard work as she crossed the line ten seconds ahead of another exciting German talent, Nina Eim, who edged Valerie Barthelemy (BEL) into third.

“I am delighted with that,” said Brownlee afterwards. “I just said to myself with a couple of minutes to go, no-one can push harder than me so, if they’re going to beat me, they’re going to have to go really deep.”

Men’s report
Rolling waves were still crashing in as the athletes took to the line for a beautiful beach start at the new-look Cagliari World Cup, Alistair Brownlee sporting the number 52 as he began his return to ITU racing with a first sprint distance effort in almost five years.

The crowds were deep with fans desperate to see him compete alongside home favourites like last year’s gold and bronze medallists Delian Stateff and Davide Uccellari, both of whom delivered good swims to put themselves into contention early on.

It was to be Germany’s Justus Nieschlag and Mark Devay of Hungary first out of the water, however, Brownlee hot on their heels and determined not to lose ground heading through transition. With T1 smoothly navigated, the trio were joined by more gifted cyclists in Ryan Bailie (AUS), Sylvain Fridelance (SUI) and Uccellari, and a lead group of twelve riders had settled into a rapid rhythm and carved out a 12-second advantage by lap three.

Stateff tried in vain to push his group along with Britain’s Ben Dijkstra, the gap to the front growing steadily albeit not significantly enough to leave them out of touch as T2 approached.

Devay had put in another brilliant ride and emerged from T2 right with Nieschlag and Kevin McDowell, and all were soon on the heels of Brownlee who’d had to negotiate a busy transition to get back out onto the run without issue.

Devay fell back along with Gregor Payet (LUX), leaving a trio who were all blowing hard, all taking small opportunities to test their rivals and all firmly fixated on gold.

It was McDowell who rolled the dice first, going away early in the second lap. His window was soon slammed shut by Brownlee and Nieschlag, and once they passed, it was always going to be a two-way battle for gold.

With 300m left, Brownlee nosed ahead one last time and this time was able to hold off the challenge and post a rapid 52m02s to snare a rare and bold World Cup gold, one that could spell the resurgence of another triathlon legend.

“He (Justus) was there on the swim, pushed it on the bike and is a real all round triathlete,” said Brownlee. “It was great to see, but I am delighted to be back and in the sharp end of a race. As for what’s next, I am still sitting on the fence. I have European Championships in two weeks and Leeds the week after that. I’ll see where that leaves me in three weeks’ time.”

“It was amazing sprinting against Alistair,” said a delighted Nieschlag. “I saw he was at the limit and it was good to catch up with Kevin. Alistair was a little faster. “It’s really going great right now. I had an awesome swim and I was out of transition first and I knew there was no chance to go away on my own, so kept it calm and went with the group.”

“I got excited a little too early and could tell the guys were hurting so I thought, let’s go,” admitted McDowell. “You don’t get an opportunity much to make an attack on Alistair so I just tried to make a move and you know what, I still ended up third. I knew I could try and take a little risk and still go for the win and I am still ecstatic to walk away with a podium.”

Women’s report
Sophie Coldwell lined up alongside teammate and race number one Jodie Stimpson for the beach start of the women’s race, all 43 athletes looking out to some big rolling waves ready to greet them on the brand new Cagliari course.

Coldwell adapted brilliantly, forging out ahead of the pack early and staying there despite having Caroline Pohl (GER) and home favourite Ilaria Zane for close company.

That trio that was then first out onto their bikes where Coldwell’s lead was soon swallowed up by the likes of Emma Jackson (AUS) and Sara Perez Sala (ESP), Stimpson also going well in her first race back this year.

After another great swim, Beth Potter (GBR) fell back and was riding alone 25 seconds behind while an eight-strong chase group ploughed on a further 10 seconds behind her, including Lotte Wilms (NED), young South African Simone Ackermanand Australia’s Charlotte McShane, all trying to get organised and make up some ground on the leaders.

See also:  HIIT Style Workout For Triathletes | Stay Fit When You Have To Train Indoors

It was Germany’s Nina Eim pushing things up front as the bell sounded, and she and Coldwell would eventually exit T2 side by side, Stimpson, Lena Meissner (GER) and Valerie Barthelemy all well placed within just a few strides of those front runners.

Having finished just off the podium in Madrid earlier in the month, Coldwell wasted no time in dropping the hammer here in Italy, pulling away and extending the daylight behind with nobody able to match the acceleration.

Sadly for Stimpson, the lack of race-practice took its toll, while ahead a battle was on between the two young Germans and Barthelemy.

With Meissner eventually dropping back, it came down to a second sprint finish in a week for Barthelemy, but she would have to settle for the bronze as she did in Chengdu, as Eim held on firm to take a brilliant first World Cup podium of her career.

“I was really pleased,” said a thrilled Coldwell. “I’m a strong swimmer but it’s different when it comes to the sea and beach running, so I was pleased to get underway and away quite quickly. It was hard to see when we were coming back in but I just kept my head down and tried to push on from the front of the bike. It was a strong working group and onto the run I was really pleased with how it panned out. I crashed a few weeks ago on my bike so the run is a work in progress and I just wanted to keep my head down.”

“I was not expecting that, i’m delighted,” said Eim. “I came out of the water in the top 20 which is really good for me and got into the first group, still feeling good. On the sprint I just gave it everything I had. It is unbelievable.”

“I didn’t really know what to expect this week,” said a smiling Valerie Barthelemy afterwards. “I was pretty tired after the travel from Chengdu and after the super-sprint I wasn’t really sure where my legs would be. I was just happy to stay in until the end. Running with Jodie Stimpson is just, wow, she’s such a legend and I never envisioned to be keeping up with her. To be working with her on the run is an honour, she’s such a class act.”