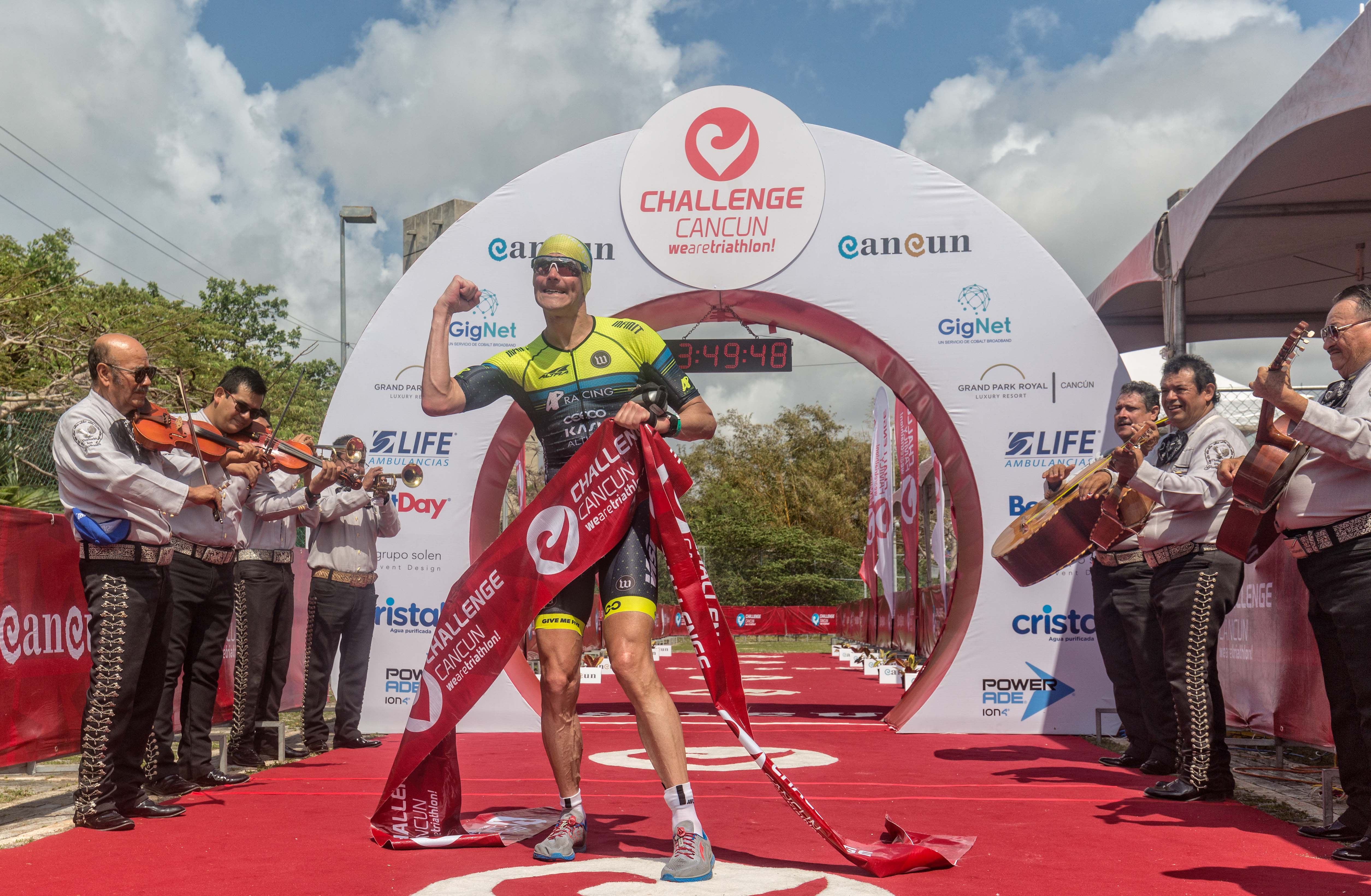 It was an amazing day for Andy Potts (USA) and Ellie Salthouse (AUS): both athletes were ‘from another world’ as they took the win at CHALLENGECANCUNafter leading from start to finish. It took Potts 3:47:04 to finish his 1.9 kilometre swim, 90 kilometre bike and 21.1 kilometre run. Salthouse took the victory after 4:09:37.

Men’s race
At the men’s race it was Andy Potts who first came out of the water: he only needed 21:20 minutes for the 1.9 kilometres swim. Only Ben Hoffman could follow Potts and came out of the water 7 seconds behind. After these two leaders there was a one minute gap to a following group of six guys including Taylor Reid and Cody Beals.

After the first 25 kilometres on the bike, Andy Potts and Ben Hoffman were still in the lead. The two leaders seemed to be very strong and were able to increase their lead on the chasing group. In this group Taylor Reid and Cody Beals were accompanied by Elliot Bach, Jorge Fuentes and Chris Schroeder.
It was Potts who made his move in the second lap, taking an advantage on Hoffman. After 57km biking he leading solo, almost three minutes ahead of Hoffman. The chasing group behind was still together, but lost time as well: at this point they were over five minutes behind.

Eventually Potts came back to transition with a bike split of 2:00:35, which means an average of almost 45 kilometres an hour. Thanks to this pace he expanded his lead to almost four minutes on Hoffman and almost seven minutes on the chasing group.

During the first part of thehalfmarathon it was Potts losing some time on Hoffman, but still he was very strong in the lead with an advantage of 3:30 minutes. The battle for the second and third place weremore exciting at this point, when Beals and Reid ran head to head, just 1:30 minutes behind Hoffman and closing in very fast.

After 3:47:04 it was Potts coming over the finish, claiming victory very happy.,,I’m searching for two things in sport: a genuine smile at the finish line and a job well done doing. If I do my job in terms of doing my best, then I earn a smile at the finish line. No matter if it’s a first, second or fifth place, if I try my best, then it’s a genuine. I’m so grateful to CHALLENGEFAMILY for having me here and giving me the chance to get this smile.”

After the victory of Potts, Beals took over Hofmann in thelastkilometres of the run and finished second in 3:48:10. Hoffman followed third: 3:49:21.

Women’s race
At the women’s race it was one of the favourites for the win who first came out of the water: Ellie Salthouse looked really strong and finished her 1.9 kilometres swim after 25:30 minutes. After Salthouse a group of three women came out of the water together: Amalia Isabel Sanchez followed in secondposition after 27:17, Mirinda Carfrae followed third in 27:18 and Maddy Pesch fourth after 27:22.

After her fast swim, Salthouse showed her power on the bike as well. After the first 25kilometres on thecourse she increased her lead to almost three minutes on Mirinda Carfrae. Behind Carfrae it was Maddy Pesch in third position, more than six minutes behind Salthouse. Yvonne van Vlerken, the 2018 winner of the CHALLENGEFAMILY World Bonus, passed this point as fourth with a gap of over seven minutes.

In the following kilometres Salthouse increased her gap even more and after the first 57km Mirinda Carfrae was almost four minutes behind. Also Maddy Pesh and Yvonne van Vlerken, who came in as third and fourth, lost time on the very strong riding Salthouse. When she came back in the transition, Salthouse had an advantage of almost five minutes on Carfrae. The other women were more than ten minutes behind.

During the half marathon it was Salthouse running as strong as her swim and bike ride, so she could expand her lead on Carfrae. After 4:09:37 she took the victory at CHALLENGECANCUN. ,,There is no other place in the world where you receive a treatment like this. The Mexican welcome is amazing. I really feel like a princess. You guys always put us on the first place, so thank you CHALLENGEFAMILY.”