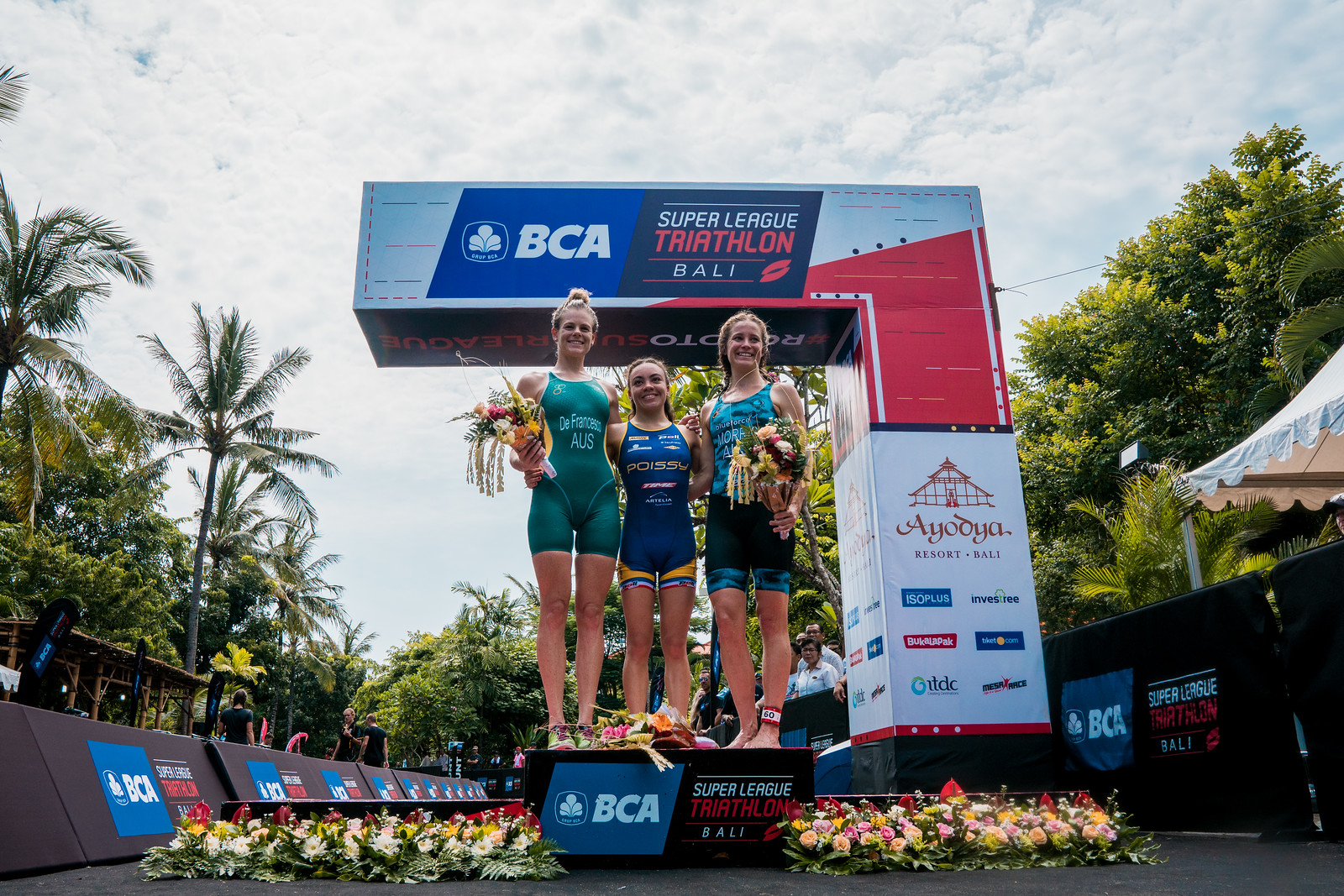 Sandra Dodet of France pulled off a repeat performance on Day 2 of BCA Super League Bali, topping the podium of the Enduro ahead of Australians Danielle de Francesco and Kerry Morris.

With surf and current conditions less brutal than yesterday’s, De Francesco and Dodet started to the left of the field and were able to make a beeline for the first buoy. The Australian made full use of her strong swim to pull clear of the field and log a 23-second lead out of the swim. Dodet and Morris soon emerged from the surf to form a chase group with Alessia Orla of Italy and Jasmine Greaves of Australia.

Sheedy-Ryan along with compatriots Aleisha Wesley and Maighan Brown and Erin Storie of the USA made up a second chase group more than 10 seconds back.

De Francesco’s early lead led to a host of eliminations out of the swim as athletes from Indonesia, Singapore, and the Philippines ran afoul of the 90-second rule. Only Maria Claire Adorna and Kim Kilgroe of the Philippines managed to make it out onto the bike leg, keeping hopes alive for the Asians.

However, as the lead athletes started the run leg, the last two athletes into transition would be eliminated. Adorna would have made it through, but Klaudia Sebok of Hungary pulled out of the race between the two Filipinos, metaphorically putting both their heads on the chopping block. Only 10 athletes were left on the course after the first swim-bike-run.

While De Francesco was first off the bike, Dodet was right on her heels and overtook her on the run. The French athlete kept that lead into the second swim, heading into the water with De Francesco and Morris.

The lead three would continue to pull ahead through the second swim-bike-run, with Orla, Greaves, Storie, and Wesley as the unlucky casualties. Sheedy-Ryan rounded off the final four athletes left on course.

On the final swim-bike-run, it was nearly the same story with De Francesco holding the lead. But Dodet put on the afterburners rounding the turn into the second lap and never looked back. In a matter of minutes, she was lifting the winner’s tape overhead.

“It was the hardest shortest race I’ve ever done,” said Dodet post-race.

De Francesco said of her commanding leads out of the swims,

“I didn’t know how it would pan out… But it just worked out in my favour I guess.”

Having earned maximum points from her performance over the two days, Dodet has earned the first Golden Ticket into the 2019 Super League Championship Season. In the points race, De Francesco (fourth yesterday) also pulls ahead of compatriot Felicity Sheedy-Ryan, who ends up with the final Golden Ticket in the women’s field.

Morris just missed out on a Golden Ticket by one point. She said,

“Whenever I race I give it 110 percent, which you can see on my face — it’s not a pretty pain face.”

Race in the Colors of Jan Frodeno