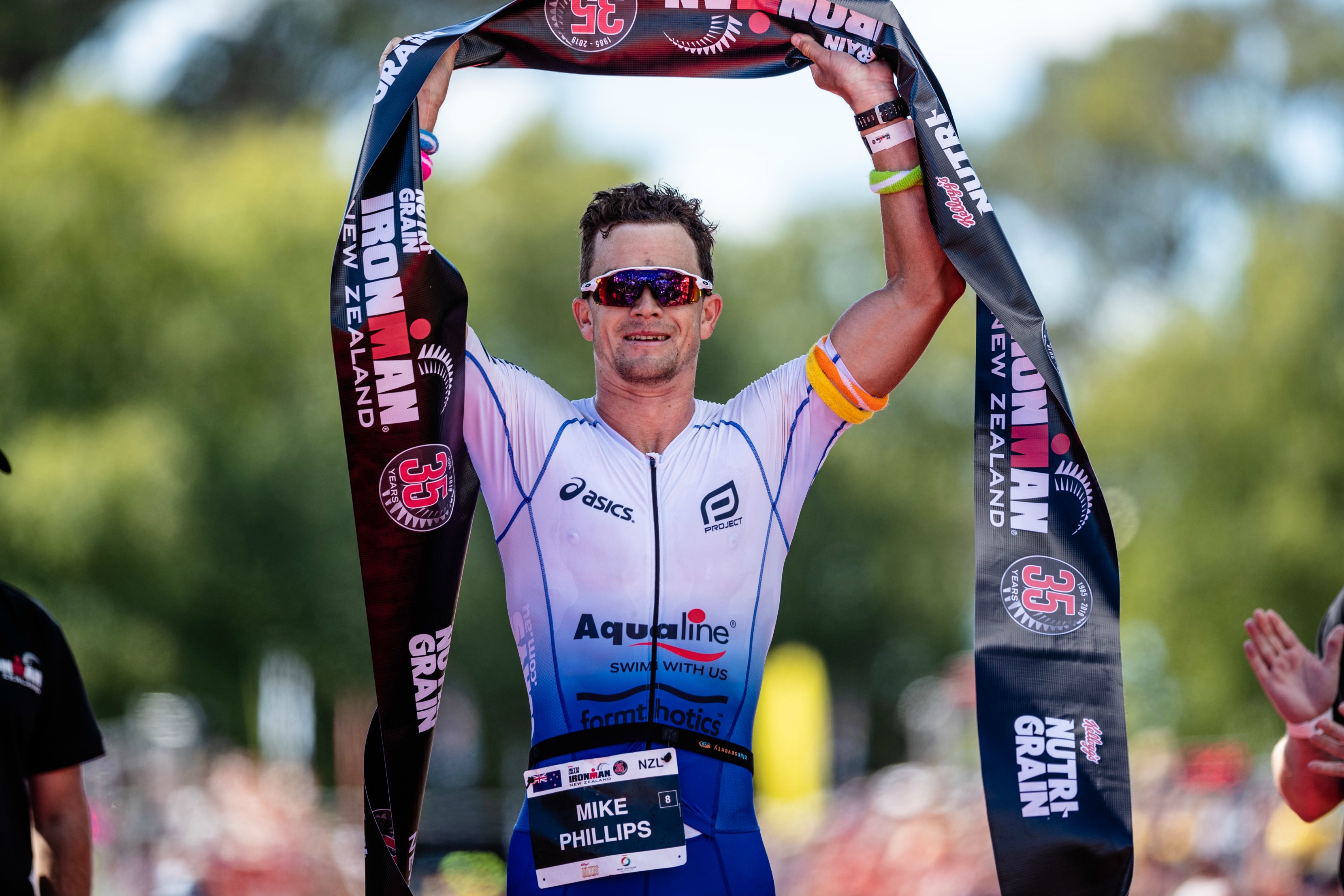 Christchurch triathlete Mike Phillips has stunned a star-studded field to win his first title over the IRONMAN distance, overcoming a mechanical and a crash on the bike leg to win the 35th Anniversary Kellogg’s Nutri-Grain IRONMAN New Zealand in Taupo today.

Trailing by 17 minutes going into the run leg, even Phillips expressed surprise at his win, finishing 2:24 ahead of American Andrew Starykowicz with Braden Currie (NZL) a further 1:32 back in third. The win was thanks largely to a course record marathon leg of 2:40:04, a personable best by ten minutes for the 30-year-old Cantabrian.

Phillips only took the overall lead in the final 5km of the marathon from Starykowicz, who carved up the Ventum 180km bike course in a record-breaking time of 4:12:07 to establish a massive lead over the chasers. Second off the bike was Matt Burton (AUS), followed quickly by Currie and Terenzo Bozzone.

While Bozzone would succumb to a hamstring injury, joining 12-time winner Cameron Brown as he too had a rare DNF, the chasers set about trying to catch the American.

Currie quickly claimed second place and was consistently clawing back time from Starykowicz, with Australian Matt Burton also staying in the conversation, but it was Phillips who made the critical move, surging past Currie and setting his sights on the American.

Phillips couldn’t quite believe he had for the first time won the right to stand on top of the podium, and clearly didn’t rate his chances after the mishaps on the bike.

“Definitely not, I had some problems on the bike early, I had a mechanical and had to wait a few minutes to get my arm pads fixed and then coming into town trying to catch the guys I rode straight into the barrier. I was thinking not much else can go wrong today and then slowly but surely on the run I was able to take some time back, but a 17-minute lead off the bike I never thought I would catch him.

“Even the last lap it was out at six minutes, but it just kept coming down and coming down and I was running harder and harder. Eventually I was able to catch him and enjoy the last few kilometres. But I never thought I could do that, I thought it was all over after the incidents on the bike, but somehow I was able to churn away on the run and haul them all in.”

Starykowicz was spent at the finish and content that he had given his all – as he always does. He departs with a runner-up finish, a qualification spot in Kona later in the year, and a new course record on the bike.

Sign up now for Clark Duathlon Classic–Happening on April 7, 2019 at Clark, Philippines

“I am a little heart-broken, but I laid down the hammer all day, that is how I race. When I caught the group, I sat up at the back for a minute, ate some food and let my heart rate come down. But I left it all out there on the course, I had some bad mental self-talk in the swim when I got trapped, but to pull it out the way I did today, it was good.

“I will be back here twice in 2020, I am looking forward to the 70.3 World Championships here. I really like this IRONMAN course, I feel it suits me quite well. But I gotta tell you the way back on the run really suits me a lot better than the way out – I kept telling myself just get to the turnaround and then you are money on the way back.”

2017 champion Currie had thought everything was coming together perfectly, until struggling for rhythm on the run leg.

“That was an interesting day to be honest. I felt fantastic, had a great swim and was right where I wanted to be. On the ride I rode really well for me, nice and consistent. Terenzo put the pressure on about half way through and I thought I could let him go and see what happens and sure enough I pulled him back in on the climb back up in the last 15k and managed to get away.

“To be honest everything was positive at that point, I thought I was going to run really well but got off and couldn’t find a good rhythm, nothing felt smooth and pace was off what I was targeting. I was gaining on Starky but in the end I just didn’t have enough in the tank and the legs weren’t quite there on the run.”

The 2019 Kellogg’s Nutri-Grain Ironman promised to be one of the greatest races in the event’s decorated 35-year history and it proved that way right from the gun, on a picture perfect day at Lake Taupo.

Cantabrian Dylan McNeice established a lead of over a minute out of the Roka swim course on a chase group of six athletes, that featured many of the leading lights in Bozzone, Currie and Mike Phillips.

Twelve-time champion Cameron Brown emerged just under five minutes down on McNeice but faced a 30 second penalty when his helmet became unclasped – the result of cold fingers not working as they should after the swim leg.

Off the bike it became a clock watching exercise as first Currie and Burton and then Phillips made inroads into Starykowicz on the Hoka One One run leg, before Phillips proved strongest on the day for his maiden IRONMAN victory.

“This feels amazing, especially at home and especially with the bad luck,” said Phillips. “I never thought first was possible until that last lap on the run and all the guys on the sidelines cheering me on and pushing me that little bit further to ‘get that American dude’.

While the pro athletes have concluded their day, many will return later tonight to present medals to the hundreds of remaining athletes who will continue into darkness, with the final cut off time of midnight always bringing some of the most emotional moments on an amazing day in Taupo.