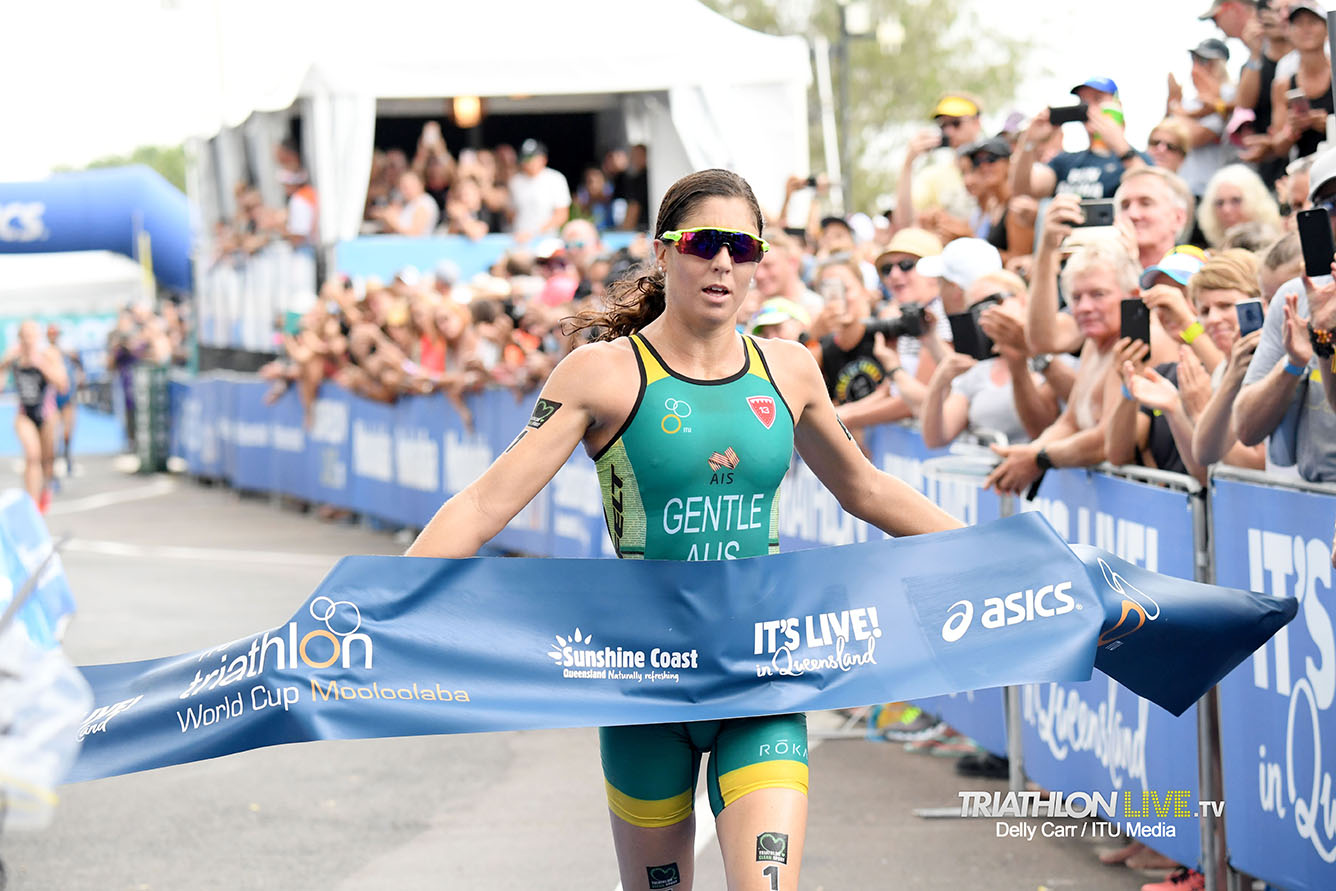 The coastline of Queensland, set in Australia, was the stage for the 2019 elite men’s Mooloolaba ITU Triathlon World Cup.

Conditions cooled down considerably as the elite men took to the stage and hit the water for the first portion of their race.

Tyler Mislawchuk from Canada, a firm race favourite leading into today’s race, produced a slick first transition to lead out onto the bike course. A train of men tracked closely behind.

Nothing could separate the group of at least 30-men as they pushed together across the 4-laps of the bike course. Each taking turns out in the front seat but no one was brave enough to breakaway.

The bike course, which coasted along the ocean, was tight in sections and an unfortunate tumble on the iconic Mooloolaba roundabout saw America’s Eli Hemming withdraw from the race.

It was a fierce rush as the elite men approached the second transition for the day. New Zealand’s Sam Ward, Mislawchuk and Australian Olympian Ryan Bailie were the first out onto the run course.

Within the early stages of the running race Mislawchuk made a bold move and glided out in front. The Canadian looked calm across all three-disciplines today and was strong enough to dominate as the front runner.

On the bell lap of the run, Germany’s Valentin Wernz and Australia’s rising star Brandon Copeland were chasing Mislawchuk to battle it out for the other spots on the men’s podium.

Mislawchuk was a powerhouse across all three disciplines today and his striking bike and run combination allowed him to take the tape and be awarded with the gold medal.

“First World Cup win, I am over the moon and I am just so excited.

“Australia is my second home, I’ve got a lot of friends out so it’s awesome to be able to do it in front of them,” said Mislawchuk.

Australia’s young gun Copeland was thrilled as he crossed the finish line to be presented with the silver medal for Australia and Wernz rounded out the men’s podium with a bronze medal for Germany.

“I am absolutely stoked with that. I came here hoping for a podium and it all came together today,” Copeland said.

To come out here and get a result like that, hopefully that will put my name in the ring,” added the aspiring Australian Olympian.

“My first time in Australia and first podium on the World Cup circuit, I am so happy. I had a good transition and tried to hold onto Tyler (Mislawchuk),” Wernz said.

Conditions were typical for Queensland being hot and humid however the surf was not favourable for those hoping to catch a few waves back into shore.

47-women lined up on the beach to attack the 750m swim, among them were Olympians, World Triathlon Series and World Cup champions. It was no surprise that Australia’s Emma Jeffcoat, who is renowned for her swim set-up coming from an Australian surf background, led the women around the buoys, back onto the beach and into the first transition of the race.

Jeffcoat, Perkins, Van Coervorden and Gorman established a 21-second lead out on lap-1 of the bike and were being chased by a cluster of women being drive by Australia’s Ashleigh Gentle. By the second lap of the somewhat technical bike course the two front groups formed together and now included all the big names and race contenders.

By the final lap of the bike course in Mooloolaba it was obvious that this World Cup battle was going to come down to a blazing running race. The question still remained as to who had the power and run legs to bring the race home and take the tape.

Tactics were crucial for the second transition, as the frenzy of elite women headed out to attack the hilly 5km run course of Mooloolaba. With podium places still up for the taking, it was Australia’s Van Coervorden, who produced a firing transition to take an early lead, for the run portion.

Moments later and still in the early stage of the run, Gentle, the top seeded female leading into today’s race, made a comfortable move to take control of the race.

A strong field of elite women were hot on the Australian’s heels, including America’s Renee Tomlin and Italy’s Angelica Olmo.

By the final lap of the run, it was evident that this was Gentle’s race. The Australian was able to extend her lead to cross the finish line and be awarded the gold medal. 2019 marked a maiden win in Mooloolaba for Gentle who was elated with her race performance today.

“It was really tough. I knew it was going to be a big ask to back up after Abu Dhabi last weekend. I am really happy and a little bit surprised to be honest”, she said..

“Racing at home here in Queensland was really special to me today and I am really grateful for the support I get from my fellow Queenslanders so I really wanted to come back and race on home soil. Seeing some familiar faces here in Queensland today reminded me of why I started triathlon. I will do a training camp now in Perisher, Australia, before going over to America and then race the next World Triathlon Series race in Bermuda,” said Gentle.

Only six-seconds behind Gentle, Tomlin claimed the silver medal for America and Olmo, who took home a bronze medal in 2018, crossed the finish line in third place representing Italy on the podium.

Ironman Swim Training: Keeping up with the Fast Swimmers