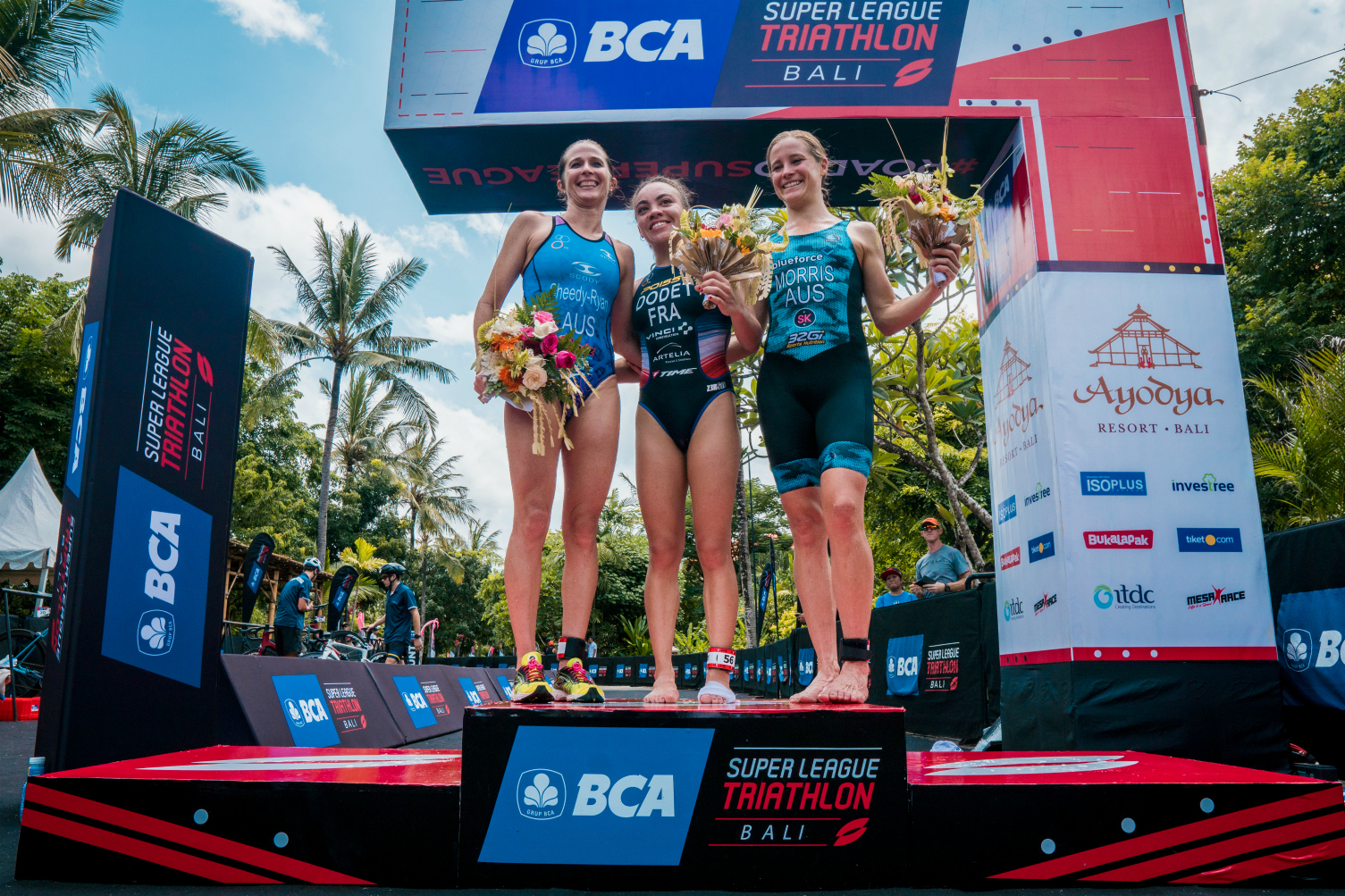 In a scorching afternoon, Sandra Dodet of France and Ryan Fisher of Australia broke the tape to take the first wins in Super League Triathlon qualifier racing in Bali, Indonesia.

The first of two days of racing kicked off Saturday morning with the professionals lining up for the Equalizer Race Stage 1, a 1.6km effort that went off in pursuit style. Sandra Dodet pulled forward ahead of a slew of Aussies including Danielle De Francesco, Kerry Morris, Maighan Brown, and Felicity Sheedy-Ryan to finish first. Eventually Sheedy-Ryan – known to the other athletes as Flick – would beat her compatriots to finish second with De Francesco rounding out the top three. Indonesian athletes Eva Desiana and Asihta Aulia Azzahra finished 14 and 17th respectively.

Shortly following the women’s, the men’s race kicked off with American Walter Schafer winning the mile foot race blitzing a cool 4:19 mile, an excellent time for the former standout collegiate runner from Notre Dame. Lachlan Jones and Ryan Fisher would eventually join Schafer in the top three.  The crowd favourite was local athlete and Olympian Andy Wibowo, who finished 50 seconds behind Schafer.

After a short break, the athletes would return in the dead heat of the day to kick off Stage 2 of the Equalizer Race, a swim-bike-run-swim-bike-run event. Leaders of the time trial start earlier ahead of their hard-charging competitors and look to hold their lead against the competition. The women dived into the ocean in huge, choppy swells and immediately the field strung out, with super swimmer Danielle De Francesco exiting the water first and Dodet, Morris, Orla and Sheedy-Ryan hot on her heels. The difficult swim would claim the first of the competitors and the early part of the bike chopped the women’s field almost in half. By the time the women were running in the heat of the day, it was Dodet, Sheedy-Ryan and Morris who had pulled ahead. Dodet kicked towards the halfway mark of the final lap to come through the line with a convincing win followed by Felicity Sheedy-Ryan and Kerry Morris, putting up an impressive effort coming from a long distance racing background. Danielle De Francesco and Alessia Orla would round out the top five.

“The swim was really tactical, and I tried to hit the buoy straight on. I’m a surfer at heart so I thought I could grab a wave and ride it in,” says Morris when asked about the swim. “At some point, I thought, Kerry, you’re either in this race or you’re out. The conditions were brutal out there.”

Shortly after the podium ceremony, the gun went for the men’s race, with the men facing an equally difficult ocean swim. Having the advantage of watching the shifting tide of the women’s swim, the pack stayed tighter together with a whole string of men exiting the water in relatively quick succession including Lachlan Jones, Anthony Pujades, Aurelien Raphael, Tommy Zaferes, Ryan Fisher, Jumpei Furuya, Michael Lori, and Pierre Le Corre.

Immediately large groups of athletes bunched up in the bike leg.  Furuya and Le Corre fell behind the main pack of Fisher, Zaferes, Lori, Pujades, Raphael, and Jones. The front pack put on a bike-handling clinic hugging corners with the top six coming off within a few seconds of one another. The two-lap course saw the athletes start to string out with Fisher pulling ahead half way and holding the lead through to the finish. Raphael and Pujades hung on to finish second and third respectively. Canadian Michael Lori had a standout performance finishing fourth and Japanese athlete – and previous Super League competitor- Jumpei Furuya finished fifth.

“It doesn’t always look pretty,” said Ryan Fisher, of his win on day one. “I’ve had a pretty good focus on my technical running and biomechanics, and it’s been working well. Obviously, there is still lots to do but I am thrilled to be here.”

Sundays racing features the brutal  Enduro format in what is likely to be another sizzling day of racing. Stay tuned on our website and social channels for more updates.