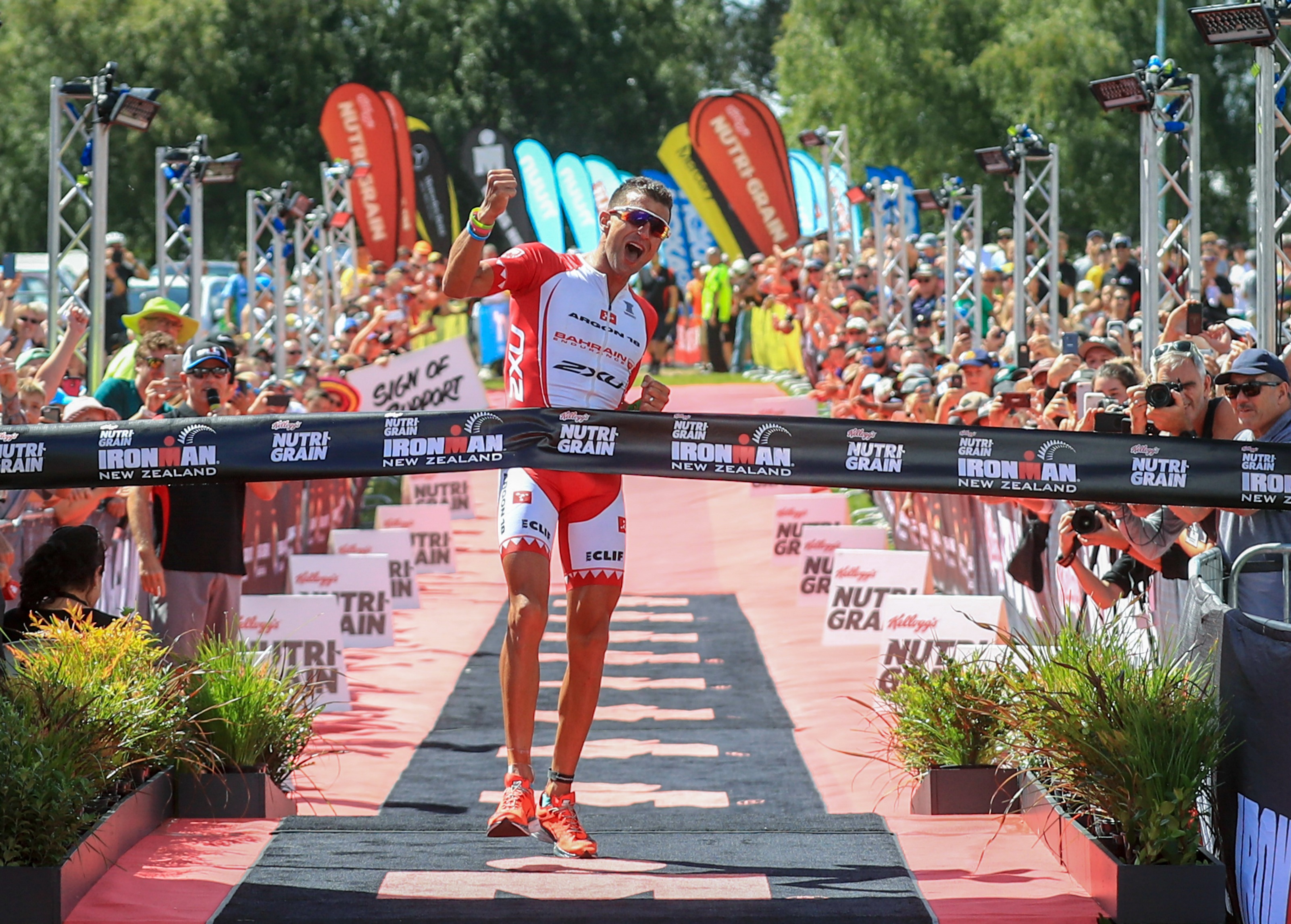 It seems fitting that a celebration of 35 years of Kellogg’s Nutri-Grain IRONMAN New Zealand that the men’s race should be set up as a fascinating clash between three of the best the sport has seen, and they are all flying the New Zealand flag.

At 6:45am when the cannon fires and the pro men’s field takes to the 3.8km swim in Lake Taupo, most eyes will be on the past, present and certainly the future of this race in the shape of 12-time winner Cameron Brown, defending champion Terenzo Bozzone and 2017 champion Braden Currie.

That is not to dismiss the challenge of the internationals with Andrew Starykowicz (USA), and Tim Reed (AUS) leading the way, or other Kiwis like Mike Phillips and Dylan McNeice, but the star Kiwi trio has earned their right to headline status and line up in what looms as one of the greatest days the iconic event has seen.

By virtue of his win here last year and stunning end of year form, Aucklander Terenzo Bozzone will carry the favourite tag – albeit by a small margin.

“The pressure of competing in front of a home crowd has always been a pressure I enjoy and sparks the competitive side of me. I am exited to be returning as defending champion in Taupo and to be honest the motivation from that victory last year has spurred me to some great training this year.”

Bozzone says his sub-8 hour win last year was a big marker in his decorated career.

“It was a funny emotion, I knew I was capable, for the past ten years I was just waiting for it to happen. I have raced around the world and figuring out the full IRONMAN distance was a big thing for me. Having a race I knew I was capable of was a big tick of moving forward toward my big goal of winning the IRONMAN World Championship in the next few years.”

Bozzone knows he is in for another torrid day if he is to win again.

“It is going to be a quick day, with the quality of the field it is probably the deepest field we have ever had in Taupo which is exciting for the 35th anniversary.

“The whole of the game is changing though and stepped up another level, nowadays you have to be ready to adapt your race plan, now you have to adapt to be competitive with your competitors throughout the day.

“The power on the bike and pace on the run are just a whole new level. When Braden won a couple of years ago started the marathon at a full pace, you have to make the call do I go with him or back off and hope he comes back.

“And Cam is the same, he has probably had his fastest two marathons the past couple of years in Taupo, so you kind of want that in the game plan. You don’t want him with you heading on to the run, you want a buffer on him if you can get it.”

2017 champion Braden Currie is now well and truly established as one of the sports stars, finishing 5th at Kona last year in the 6th fastest time ever over the course. After being ill in Taupo last year and not finishing the race, he is determined to do well on Saturday.

“IRONMAN New Zealand is an important part of my calendar, being a Kiwi this is an event that I really target and focus on and this year I am hoping to pick up a Kona qualification spot.  Taupo always has a great atmosphere, it really embraces the race, the people the culture, the community and the environment really.

“The lake is a beautiful place to swim and the run course wrapping around the lake is nice, really scenic and the time passes really quick when you are there. The beauty of a three-lap run course is a big crowd that really gets into it and encourages you to keep pushing.”

Currie expects something similar to previous years with the usual suspects involved, albeit he tags Starykowicz as someone to spice up the bike in particular.

“I think the race will be quite similar to other years, probably a group of swimmers that are relatively matched on the bike, there might be a few minutes in it. Andrew Starykowicz might go up the road and one or two might go with him. But at the end of the day it is going to be within five or six minutes of each other off the bike and come down to a running race.”

The American is not shy of a word or two and has some bold predictions and dire warnings for his rivals, preferring to avoid the ‘vanilla triathletes’ answer to questions!

“I am going to play to my strengths and crush some souls.  After this weekend 7:59 will not be the course record I can wager that.”

The 36-year-old hails from Chicago and has come to New Zealand from the depths of winter though and admits to requiring a fast adjustment.

“I am a non-nomadic triathlete based out of Chicago area where it is mid-winter.  I did my long runs on 10 plus centimetres of snow on a semi packed snow machine trail.  My training has been nothing short of ‘Rocky 4’ in Russia. My first time on my TT bike was two weeks ago. Now it is time to see if I can turn winter fortitude into peak season speed.

“So why New Zealand? The new Kona qualification procedure requires a new strategy.  Timing is not ideal but when in life is it?  It is a course that I have been told by many will suit me well.”

All will be revealed when the winner crosses the line outside the Events Centre in Taupo at approx. 2:45pm Saturday afternoon.