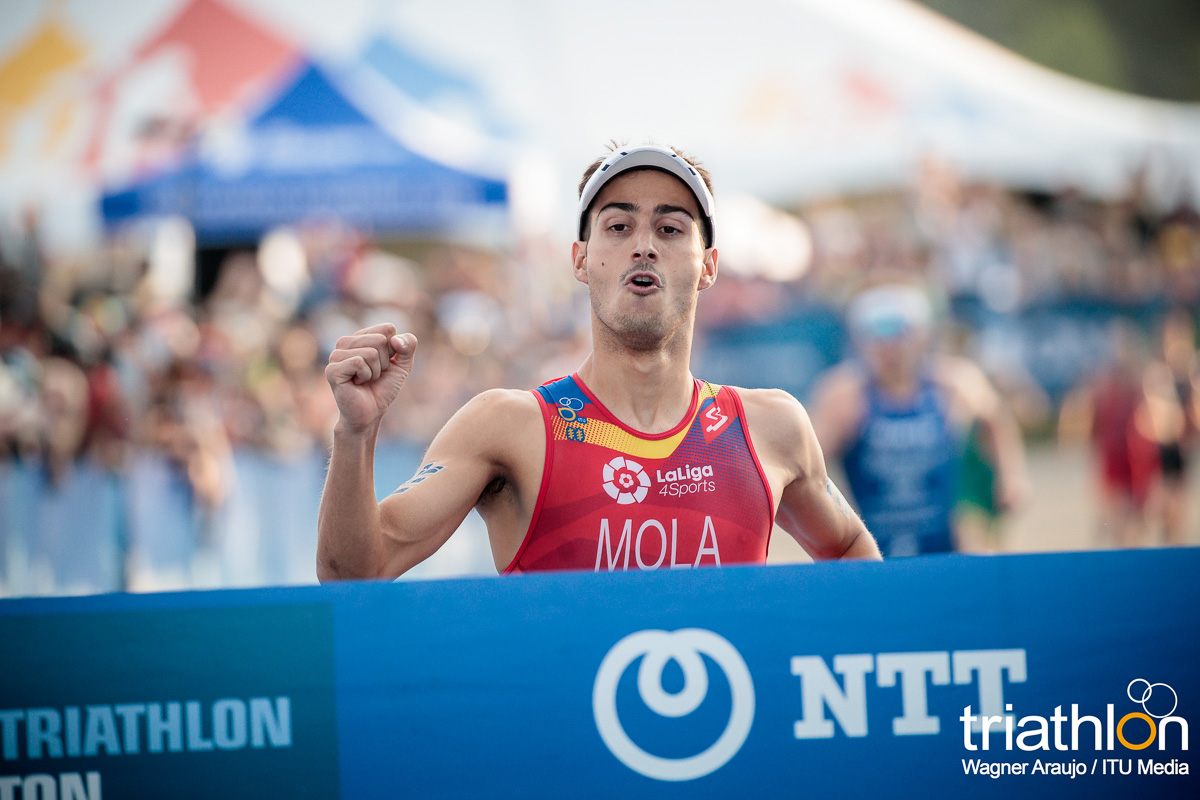 The 2019 triathlon season promises to deliver another thrilling ten months of racing, with Spanish legend Javier Gomez returning to do battle with teammate Mario Mola, Flora Duffy eager to check Vicky Holland and Katie Zaferes’ progress, and a host of breakthrough talent displaying their skills at 17 World Cups around the globe. A year out from its Olympic debut, the Mixed Relay World Series will encompass four stages (including August’s Tokyo 2020 Test Event), Pontevedra hosts the Multisport World Championships, and Aquathlon makes its debut at the World Beach Games. Buckle up, it’s going to be quite a ride…

February
The season gets underway on the second weekend of February in the summer sun of South Africa and the snow-covered Alps. Cape Town will host the World Cup curtain-raiser, a race that always attracts a host of stars looking to get their years off to a good start, while the Italian town of Asiago will see the run-bike-ski Winter Triathlon World Championships.

March
March sees the first top-tier race of the year with the Daman World Triathlon Abu Dhabi where Great Britain’s Vicky Holland and Spain’s Mario Mola begin the defence of their world titles with the likes of Flora Duffy (BER) and Vincent Luis (FRA) hot on their heels and the weekend also kicks off the 2019 World Mixed Relay Series. That all comes the week after the Devonport Paratriathlon World Cup and the week before the Mooloolaba World Cup. The month is wrapped up in New Zealand with the long-running New Plymouth World Cup sprint-distance race.

April
The action then ramps up once again at the end of April with the WTS action return to tropical climes for the MS Amlin World Triathlon Bermuda, where Flora Duffy made light work of Corkscrew Hill to deliver a consummate performance for the race’s debut on the calendar last year.  The 2019 World Paratriathlon Series also gets under way in Milan on 27 April, while the weekend also sees the start of the week-long Pontevedra Multisport World Championships on Spain’s northwest coast.

May
A busy May line-up of action sees the World Cup circuit return to the Spanish capital Madrid and then traversing the globe to Chengdu, China, for the sixth year in succession. The WTS season heats up even further in Yokohama with Elite and Paratriathlon events on the weekend of 18-19 May, and the World Cup season continues to Cagliari, Sardinia, the following weekend.

June
On 8-9 June, the eagerly awaited AJ Bell World Triathlon Leeds brings WTS thrills back to the north of England, while the same weekend the beautiful coast of Huatulco, Mexico, hosts the seventh World Cup stop of the year. After cold weather affected its debut race a year ago, the Astana World Cup moves back to mid-June, along with the second race in the Mixed Relay World Series, taking over Nottingham’s Trent waterfront for the second time, and the Besancon Paratriathlon World Cup. A non-stop month continues with the Antwerp World Cup before closing out with WTS Montreal with Elite and Paratriathlon World Series racing.

July
The Hamburg Wasser World Triathlon weekend sees the WTS season reach one if its most enduring and popular stops on the first weekend of July, one that includes the Mixed Relay World Championships and sees Team France looking to defend its title. Another classic plays out the following week in Tiszaujvaros, with World Cup fever descending on the Hungarian town for the 23rd consecutive year. The WTS lands in Edmonton for the last race before the 2019 Grand Final, along with the final edition of the Mixed Relay World Series, and Lima hosts the 2019 edition of the Pan-American Games from 26 July.

August
All eyes will be on Tokyo for August’s Olympic Test Event featuring Elite, Paratriathlon and Mixed Relay events on the stunning Odaiba Marin Park venue where three Olympic golds will be awarded in 2020. From there, it is on to Switzerland and the 2019 Grand Final in Lausanne where the year’s World Champions will be crowned at all levels having been tested to the limit on a deeply challenging course, while the World Cup circuit makes its way to the beautiful Czech town of Karlovy Vary on the penultimate weekend of the month.

September
The first event on the calendar for September is the Banyoles World Cup, with the Spanish city hosting the Elite event for the first time since 2012 along with Paratriathlon racing. The same weekend, the Zofingen ITU Powerman Long Distance Duathlon World Championships will take place in Switzerland. The coastal Chinese city of Weihai then hosts the 12th World Cup of the year on 22 September, the third year in succession it has welcomed our elite athletes to its shores.

October
The Turkish city of Alanya welcomes a Paratriathlon World Cup at the start of October, before Aquathlon makes its debut at the World Beach Games in San Diego. World Cup racing returns to South Korean town of Tongyeong on 19-20 October before heading across the Sea of Japan to Miyazaki.

November
The World Cup season draws to a close in November, with the Ecuadorian city of Salinas holding the penultimate race of 2019. The curtain then comes down on another packed calendar in Santo Domingo, the capital of the Dominican Republic, where a warm Caribbean send-off awaits the athletes at the end of a busy year.

The Importance of a Proper Bike Fit