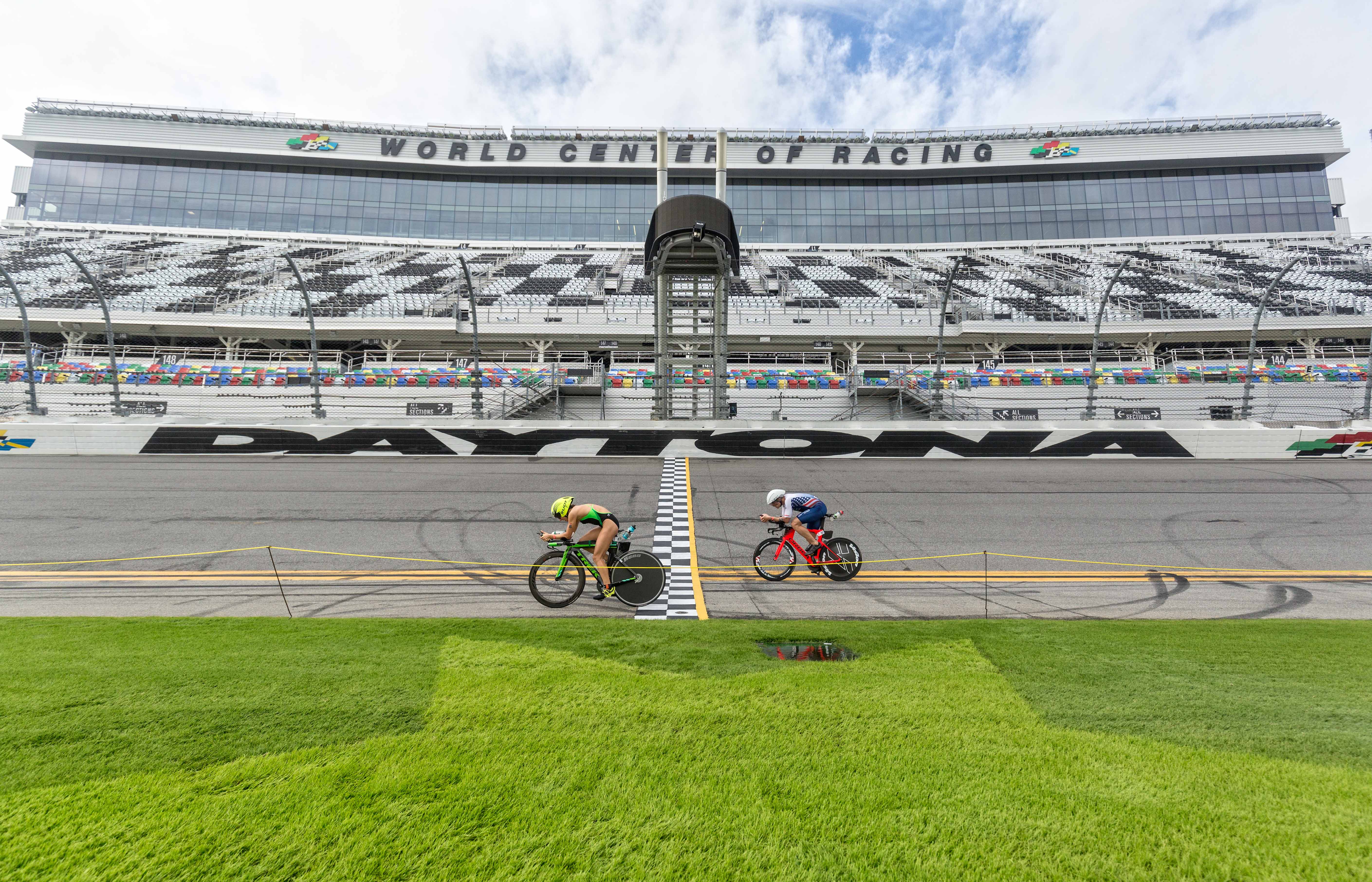 The professional race, originally slated as a Middle Distance triathlon (1.2-mile swim, 56-mile bike, 13.1-mile run), was delayed until 12:45 p.m. and altered to cover a 1-mile swim, 37.5-mile bike, and 8.2-mile run. The shorter distance event took place entirely within Daytona International Speedway, offering spectators—including age-group athletes who were finished with the morning’s modified amateur race—unprecedented access to view the pros in the heat of competition. The bike course was of particular note, consisting of 15 laps around the iconic motorsports track.

Adding to the atypical race atmosphere, the course changes and weather conditions also impacted the live tracking and timing systems during the pro race, leaving timing sensors on the bike and run courses unreadable. What the weather couldn’t dampen, however, was the utterly dynamic aspect of the multi-lap pro race. The energy was electric among spectators cheering on the pros as they flew past, time and time again.

The Men’s Race
It was no surprise to see Andy Potts (USA) emerge first out of the water in 19:24, followed by Dylan McNeice (NZL) and John Kenny (USA), 20 and 24 seconds later respectively. Uber-bikers Andrew Starykowicz (USA) and Cameron Wurf (AUS) were more than a minute behind race leader Potts heading into T1. But the chase was on as soon as they reached their bikes, and by lap three Wurf moved to the front of the race. Potts, showing fatigue on the heels of a full-distance race last weekend, began to fade as the power positions shifted at the front of the field.

Soon it was Wurf in the lead, Starykowicz in second, and Pieter Heemeryck (BEL) in third. Yet another jostling of position would occur within a few more laps, when Starykowicz seized the lead, and did nothing but lengthen it as he continued to power around the Daytona International Speedway. Meanwhile, a chase group including Santiago Ascenco (BRA) and Taylor Reid (CAN) worked hard to keep the leaders within range. Surprisingly, Matt Russell (USA) appeared to be struggling, having exited the swim in arrears of many of his rivals, and falling behind the chase group on the bike.

Ultimately, no one could match Starykowicz’ aggressive cycling pace, and the diehard NASCAR fan finished the bike in 1:17:24, nearly two and a half minutes faster than Wurf. It was no secret that Starykowicz wanted this win and the chance to cross the iconic Daytona International Speedway finish line first. But another man on a mission, Heemeryck usurped his dream of victory with a lightning-fast 44:51 run split, moving into first and never looking back. The only man to run faster than Heemeryck, Ascenco turned in a run time of 44:49 to earn his spot on the podium in third behind runner-up Starykowicz. Reid also posted an impressive run (46:21) to earn fourth, and Russell used his never-give-up grit to gain several positions, finishing fifth.

“My goal with this race was to move up into fourth in the Challenge Family World Bonus ranking. I was here on a mission to do that—but I won!” said men’s champion Heermeryck. “I never would have imagined I could win over a guy like Andrew Starykowicz. It was incredible. On the last lap of the run, thinking that I was going to be the first winner of this race—that is a pretty cool feeling!”

The Women’s Race
With four world-class swimmers headlining the women’s race, it was anyone’s guess which of the group would lead out of the waters of Lake Lloyd. Sarah Haskins (USA) was first to shore, followed closely by Lauren Goss (USA); a minute and a half passed before the next swimming stars emerged, with Meredith Kessler (USA) and Alicia Kaye (USA) exiting nearly in tandem.

Although Goss sped through transition and momentarily took the lead from Haskins heading onto the bike course, it was a short-lived victory. Haskins soon regained the lead, and then in the winning form that this seasoned pro knows so well, refused to relinquish her grip on the title for the remainder of the bike and run. Goss held onto second place for the first few laps, but soon she began to struggle and was overtaken by Kessler, who moved into third. Goss eventually pulled out prior to the run.

As Haskins ticked off lap upon lap, she managed to grow her lead to a solid three minutes, entering T2 well ahead of Kaye and Kessler. She only increased her pace on the run, delivering a blistering 50:53 run split and ultimately building her advantage to 5:06, finishing in a winning time of 2:42:52. Kaye also delivered a powerful performance, and although at one point the gap between her and Kessler shrunk to less than a minute, she stayed strong and steady to finish second. Kessler crossed the line in 2:50:35, after stopping to collect one-year-old son MAK in the final yards and celebrate her third-place finish with him. The women’s top five was completed with two other Americans, Laura Matthews and Lisa Roberts.

“I’ve been racing for 15 years and this is truly one of the coolest experiences I have ever had racing. The venue, the organizers, the volunteers, the fans—just incredible. And it turned out to be a beautiful day!” said women’s winner Haskins. “Getting to meet the age group athletes, getting to do the women’s panel and meet so many other women competitors—it all meant so much to me. This is such a special win. And it was a last minute decision, but I couldn’t be happier to be here.”

In closing the weekend’s events CHALLENGEFAMILY CEO Zibi Szflucik said this:
“As endurance sport athletes, and as endurance event organizers, it’s important to be able to adapt on the fly in the face of adversity. When we realized we would need to make changes to both the age group and professional races, our team came together and determined the safest, best experience that we could give our athletes. Then we got to work and delivered. We are thrilled that we could send so many competitors home with huge smiles, having accomplished a hard-earned goal. That’s really what CHALLENGEFAMILYracing is all about.”

The CHALLENGEDAYTONA festival weekend was the first of its kind at Daytona International Speedway. The schedule of family-friendly events offered something for every level of athlete, including Sprint and Middle Distance Triathlons, the Junior Challenge kids’ race, Relay categories, Duathlon and Aquabike events, and 5K/10K run/walk events. The top six male and female finishers in each Middle Distance Triathlon age group qualified for entry in THECHAMPIONSHIP, to be held on June 2nd 2019 at the x-bionic sphere in Samorin, Slovakia.