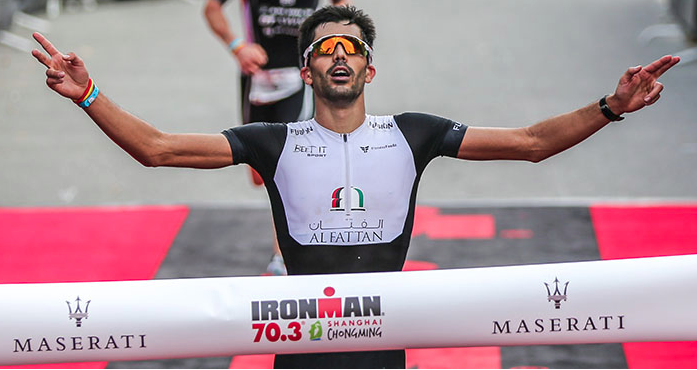 Racers were treated to picture perfect race conditions at the inaugural IRONMAN 70.3 Shanghai.

The men’s field saw a bunch of 10 charge the fast and flat bike leg around the stunning Mingzhu Lake Park on Chongming Island. The group was whittled down on the run, though, when the stronger runners asserted themselves. Portugal’s Filipe Azevedo produced a 1:12 effort to outrun South African Matt Trautman in a sprint finish. Azevedo, formerly based in Dubai, scored his breakthrough win in the distance after two podiums this year (it was also the third time he’s run 1:12 over the 21.1K distance.) Trautman, off the back of wins in South Africa and Finland and a first IRONMAN victory last month in Wales, ran a PB if 1:13 to come up 3 seconds short. Popular Aussie Mitch Robins, who was based in Asia for some time, prevailed in third.

Caroline Steffen of Switzerland made it two wins in a row, with her 1:20 run only bettered twice in her illustrious career and her fourth podium this year in her return following the birth of her son. Swiss compatriot Imogen Simmonds hung with Steffen on the bike and for much of the run, eventually falling back to second 1:30 behind while South Africa’s Jeanni Seymour produced the best run (1:18) to push up to third.