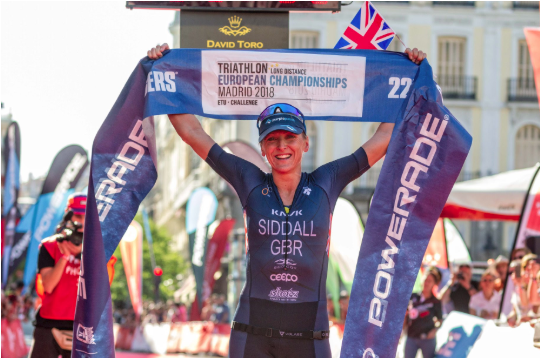 Belgian Timothy Van Houtem (09:00:13) was for the second consecutive year the winner in the individual male category of the CHALLENGEMADRID 2018. In individual women’s category, the victory was grabbed by Britain’s Laura Siddall (09:54:33).

The championship started on Sunday, September 23 at 07:45 in the Riosequillo reservoir in the north area of Madrid province, near the National Park Sierra de Guadarrama. The participants had to complete a distance of 3.8 kilometers swimming, then get on their bike and complete a circuit of 180 kilometers and 2,800 meters of positive height gain, which has gone through more than 28 municipalities in the Sierra Norte de Madrid to reach the Casa de Campo in Madrid city. There they left the bicycle and started a marathon (42.195 kilometers) which toured around the most emblematic places of Madrid such as Calle Mayor, Palacio Real, Plaza de España, Templo Debod and with the finish line in the emblematic kilometer zero of Puerta del Sol. A total of 226 kilometers.

In the men’s singles category, Spanish triathletes Pablo Dapena (09:23:01) and Carlos López (09:28:29)  led the race from the beginning, but Timothy Van Houten, who has gone from less to more setting a very high pace, was recovering positions and reaching at the end of the bike course with 15 minutes of advantage, that has managed to maintain the first position during the run course.

In the case of the females, Margie Santimaria (10:46:05) left the water with a 5 minute advantage over her pursuers, Eva Wutti (10:15:03), Laura Siddall and Alenxandra Tondeur (09:56:44). Lisa Roberts (10:07:16), third classified, entered the transition a little more delayed. This advantage was lost during the course of the cycling sector in which Laura Siddall has set the pace. In the run course, the same story has followed and the British has been crowned at Puerta del Sol followed by Alexandra Tondeur and Lisa Roberts in front of a deflated Eva Wutti.

It has been a tough race where the sun and the high temperatures of today have not given truce to the triathletes. These conditions have clearly affected the participants, but not the fantastic public that was at Puerta de Sol in Madrid who have not stopped encouraging the athletes.

In addition to the triathlon, today have also been a great cycling time trial wich has started at 09:00 in Buitrago de Lozoya. One of the main attractions of the race has been to exit from the official ramp of La Vuelta a España. The victory was for Javier San Emeterio Cutillas (05:10:18) in men’s mode. In the female category, the winner was Dolça Ollé Gatell (06:13:38).

It was a full of activities weekend for the whole family in the CHALLENGEMADRID “Festival”. On Friday, we were able to hear a conference with different professional triathletes at the Madrid City Hall. On Saturday, we enjoyed the Salfish Challenge Swim Sierra Norte and the TOTTO FUN RUN. The kids also had a great time at the 5 AL DÍA JUNIOR CHALLENGE.