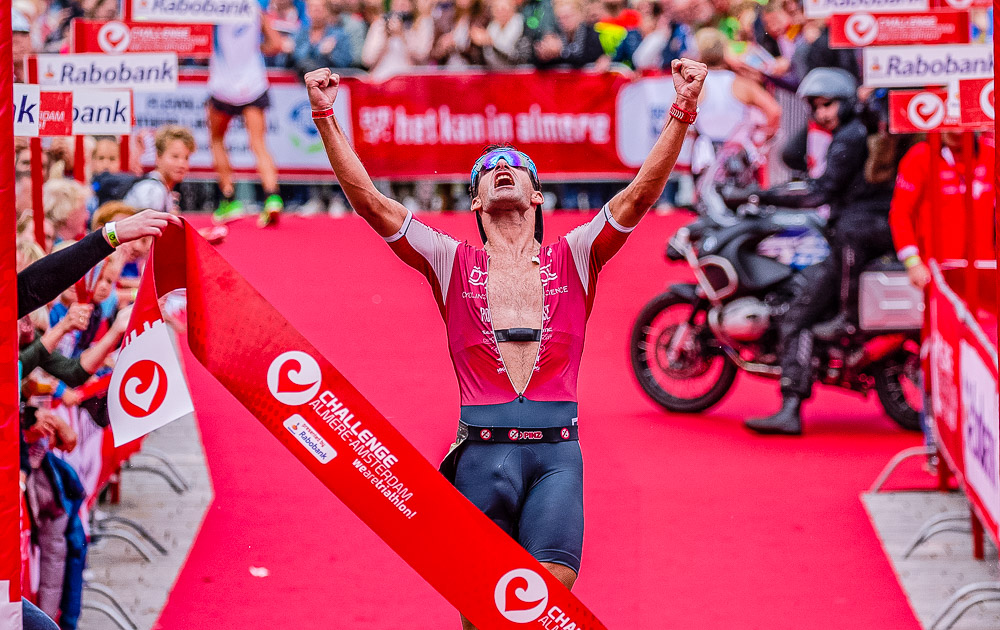 A spectacular edition of Challenge Almere-Amsterdam ended with an incredible result. Slovenian Jaroslav Kovacic took the win, beating Cameron Wurf (AUS) amongst others. Moreover, he broke the race record, which was 7:57:46 since 1999 (held by Jan van Marel). Eventually, Kovacic finished in an amazing time of 7:55:43. The women’s victory was for Yvonne van Vlerken. She prolonged her title of last year and finished after 9:00:01 with a big lead on her runner-ups.

The men’s race immediately started well for Kovacic. Alongside Dutchman Evert Scheltinga, he came out of the water first after 50:07. They were followed by a group including Cameron Wurf, Marc Unger, Diederik Scheltinga and Tjardo Visser in just over 3 minutes. However, Kovacic was focusing on one thing: ,,I was focused on my own performance and knew that I could run well. That was all I was thinking. I had to take the victory by running fast.”

While Kovacic rode the first 60 kilometers of the bike course together with Scheltinga, it was the Dutchman who drove away at that point. Meanwhile, Wurf started a very strong bike ride and managed to clear his three minutes gap quickly. After 110 kilometers, the Australian took over the lead from Scheltinga and he didn’t give it away for a long time. ,,I was lucky to be in a nice group while swimming”, says Wurf. ,,I gave my all on the bike, just to give myself a position to win. I was empty during the last part of the run. But the crowd was amazing here. Great race.”

Wurf was in the lead for a long time, also during the marathon, but at about 8 kilometers before the finish he was overtaken by Kovacic. ,,Then I knew it was over. I couldn’t follow. But this was kind of a training race for me, so I am very satisfied.”

When Kovacic overtook Wurf, he already knew that he would win. ,,This was my very best race ever. I just knew it was possible. Kilometers passed by running and finally there was a happy ending.”

Women’s race
Yvonne van Vlerken took the win at the women’s race. She finished her 42nd Long Distance, this was her sixteenth win, showing once more her power. After 9:00:01 she crossed the finish line. ,,I am so happy. People always expect you to win, to perform well, but you always have to make it happen. I am very happy, because of course it gets more and more difficult with all those young girls. It’s great that I was able to manage such a strong race.”

A great day for Van Vlerken, but number two – Els Visser – also performed fantastic and could only be satisfied afterwards. ,,I had to fight very hard for this. The wind was tough and of course Yvonne was racing so well. I am very happy for her to win. It is great to see that she is always this strong. It’s wonderful as well that I have managed to finish second. I am so very happy.”

Over 550 athletes were at the start of this Long Distance edition of Challenge Almere-Amsterdam. On the Middle Distance, almost 1500 athletes participated. In total, almost 4000 triathletes competed during the entire weekend.