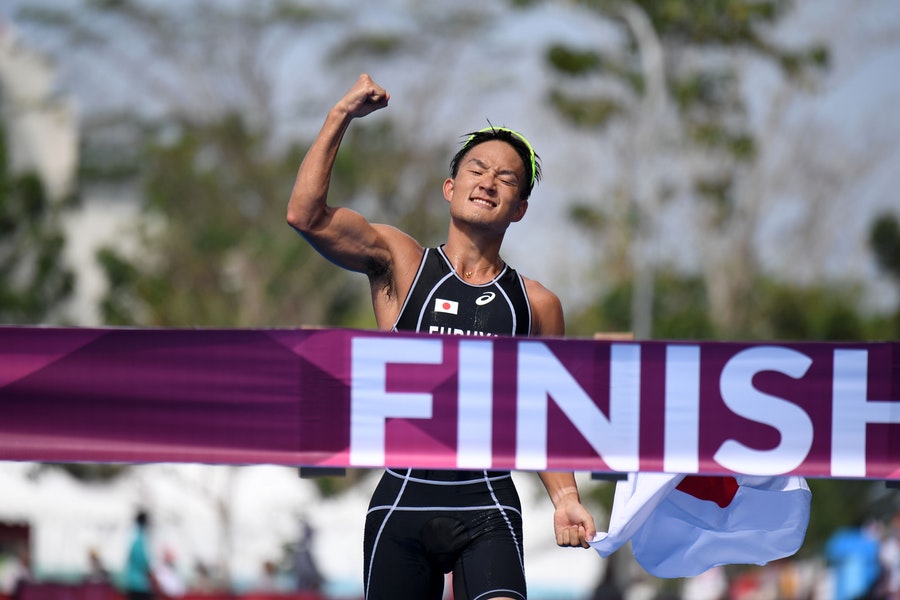 by Courtney Akrigg/ITU media; all images by Delly Carr

Japan’s Furuya Jumpei set his intentions, from the start of today’s race, as he meditated in transition prior to being introduced onto the start line. The Japanese triathlete, wearing number one, had his focus fixed on producing a gold medal performance in the elite men’s individual race, at the 18th edition of the Asian Games, a plan that played out perfectly. Furuya displayed a striking race combination to victoriously cross the finish line and be presented with the prestigious gold medal.

Leading into the race, Furuya asserted that he was determined to claim gold for Japan. This motivation was inspired by Yuichi Hosoda’s gold medal result at the 2014 Incheon Asian Games.

“I challenged the other athletes out on the bike course and tried to motivate them to work with me. I kept energy from the swim and the bike so for the first lap of the run I had fresh legs.”

Japan remains at the top of the triathlon gold medal tally at the 2018 Asian Games, with Yuko Takahashi earning the gold medal in yesterday’s individual women’s race.

Ayan Beisenbayev from Kazakhstan maintained a solid position with the leaders, across all disciplines, to earn the silver medal. Beisenbayev finished the 2014 Incheon Asian Games in ninth position so was extremely happy with today’s result.

“I felt strong and had a good race. Of course, I am so happy,” said the Kazakhstan triathlete.

In a sprint finish it was China’s Mingxu Li who was awarded the bronze medal to round out the men’s podium for the individual race.

The men contested across a 2-lap 1.5km swim, 6-lap 40km bike course and finished with a 4-lap 10km run. The conditions were hot and humid across the Olympic distance race format which started in the warm waters of in Lake Jakabaring, Palembang.

Furuya produced a fast transition to start the bike leg in first place. Out on the bike course there were two distinct groups of men but Furuya was doing all the work.

The leaders charged into the second transition and it was evident it was going to come down to a running showcase with the best runners moving to the front.

It was no surprise that Furuya surged ahead of the field to control the final leg of the individual men’s race.

Out onto the bell lap the Japanese triathlete looked strikingly confident as he knew that a gold medal was within reach.

It was a victorious moment as Furuya crossed the finish line to be presented with the 2018 Asian Games gold medal in triathlon.

The triathlon brothers from Palestine, Abdallah and Omar Abushabab, finished in seventeenth and eighteenth place respectively.

It was the first time that United Arab Emirates was represented in triathlon at the Asian Games and Ahmad Alfahim raced honourably for his nation, finishing in twenty-eighth position.

Indonesia’s Muhammad Ahlul Firman finished in a respectful fifteenth place overall and was honoured to represent his country and contest in front of a home crowd in Palembang.

Seventeen (17) participating nations are in the mix of the triathlon competition at the Asian Games including Japan, South Korea, China Hong Kong and Macau.

Takahashi dominates at the 2018 Asian Games to claim triathlon gold