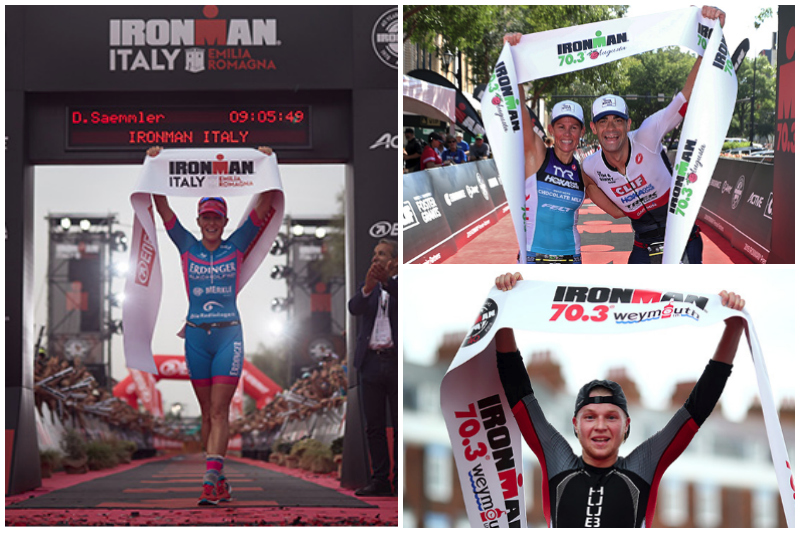 German athletes really delivered at the second edition of the IRONMAN Italy Emilia-Romagna. Andi Boecherer and Daniela Saemmler nailed dominant victories both in the men’s and in the women’s competition. One year after Andreas Dreitz had shown a remarkable race in Cervia, his fellow countryman Boecherer even highlighted Dreitz’s inaugural victory. Even though the water temperatures were too high to allow wetsuits in the professional field, Germany’s former elite swimmer Lukasz Wojt initially managed a fantastic split of 45:29. Boecherer was part of a big chase group of ten athletes and 2:23 down after the swim. Similar to his performance at the IRONMAN Austria in July, Wojt tried to stay at the front on the bike as long as possible. He worked hard to keep the gap to Boecherer and the Italian co-favorite Giulio Molinari, but those two really pushed the pace early on. After less than 80 km’s, the two chasers caught up with Wojt and started to set their own pace. Molinari stood at Boecherer’s wheel for a long time, before the 35-year old father of two embarked on a mission. Boecherer came off the bike with a lead of almost three minutes and started onto a fabulous marathon while Molinari started to struggle a bit after ranking third at the IRONMAN Copenhagen five weeks before and being third at the IRONMAN 70.3 Nice only six days before. Molinari dropped out on the run, and from that moment on there was no more threat for Boecherer. After being runner up at the IRONMAN South African Championship, at the IRONMAN Regensburg and at the IRONMAN European Championship Frankfurt in the past, Boecherer was full of emotions when he crossed the finish line as an IRONMAN champion for the first time in his career. He had come through tough moments in the past few months and really celebrated this win in Cervia just as his German compatriot Michael Ruenz who ran into silver in front of the third German on the podium, Julian Mutterer.

Saemmler was off and away early in women’s race to take the third IRONMAN victory of her career. Although she had a deficit of five minutes when she came out of the water, the 30-year old mother paced herself consistently to the front. The fastest swimmer, Beatrice Weiss from Austria, led the race for a long time, but after the first of two bike laps technical issues occured and she had to call it a day. Due to this drop-out, Saemmler was in front – and away. She got off the bike with a lead of almost twelve minutes over Carolin Lehrieder (GER) who remained in second place until Hungarian Gabriella Zelinka made the pass at the half way mark of the marathon. Saemmler nailed a course record while Austrian Bianca Steurer eventually rounded out the podium.

See also:  AsiaTRI looking to be the leading source of PR/Marketing and Photography Services for Triathlon Events in Asia

The British are obviously used to their weather conditions as they dominated both the male and the female podium – whilst there had been quite some drop outs amongst the rest of the field. It was a hard and rough race due to the cold and rainy weather.

The swim was shortened to 950 m due to choppy water that saw Germany’s Nils Frommhold exit the swim in 14:27 with Elliot Smales (GBR) and Will Clarke (GBR) following. Will Clarke soon took over on the bike and Frommhold was amongst the top 3 until the second part of the bike course when both of them dropped out. The French Alexandre Blain took over the leading position with Elliot Smales behind him. Blain also was first out on the run course but Smales took over already at 5 km’s. Blain fell back and Sam Pictor and Sam Proctor (both GBR) chased Smales with a constantly bigger growing gap.

On the women’s side, India Lee (GBR) came out of the water first in 15:31. Fanella Langridge (GBR) was already first out on the bike course but Nikki Bartlett (GBR) took over pretty soon. Langridge stayed in second position with India Lee in 3rd. These top three remained constant until running 15 k’s when Lee made it to the front and Bartlett fell back to third. India Lee kept her pace and won the race in 04:25:05. Nikki Bartlett overtook Langridge and became second in 4:28:01, Langridge finished third in 4:28:06.

It was definitely “The Tim and Rinny Show” at the IRONMAN 70.3 Augusta when the power couple dominated the competition and came home with a team sweep, winning both the men’s and women’s field.

It was O’Donnell’s turn first as the men hit the water of the Savanna River at 7:30 this morning. O’Donnell was second out of the water and he then went directly to pushing the pace early on the bike. He was joined during the bike leg by Jackson Laundry and Hunter Lessi. Tim was second off the bike just seconds back of Jackson, but made quick work gapping the Canadian early in the run and never looking back. Jackson Laundry held onto 2nd while Ivan Tutukin rounded out the podium in third.

Carfrae was next up and she did her part for the couple double with a solid 4th fastest swim, but it was the bike where she really made her mark. Rinny had an absolutely dominating bike ride coming off of the bike with a split three minutes faster than second off the bike, Jeannie Seymour. Seymour put up a good fight on the run as the two ran similarly throughout as the gap went back and forth throughout. In the end the damage done on the bike was too much and Carfrae got her well-deserved victory. Seymour finished second with Lauren Barnett rounding out the podium in third.