Takahashi dominates at the 2018 Asian Games to claim triathlon gold 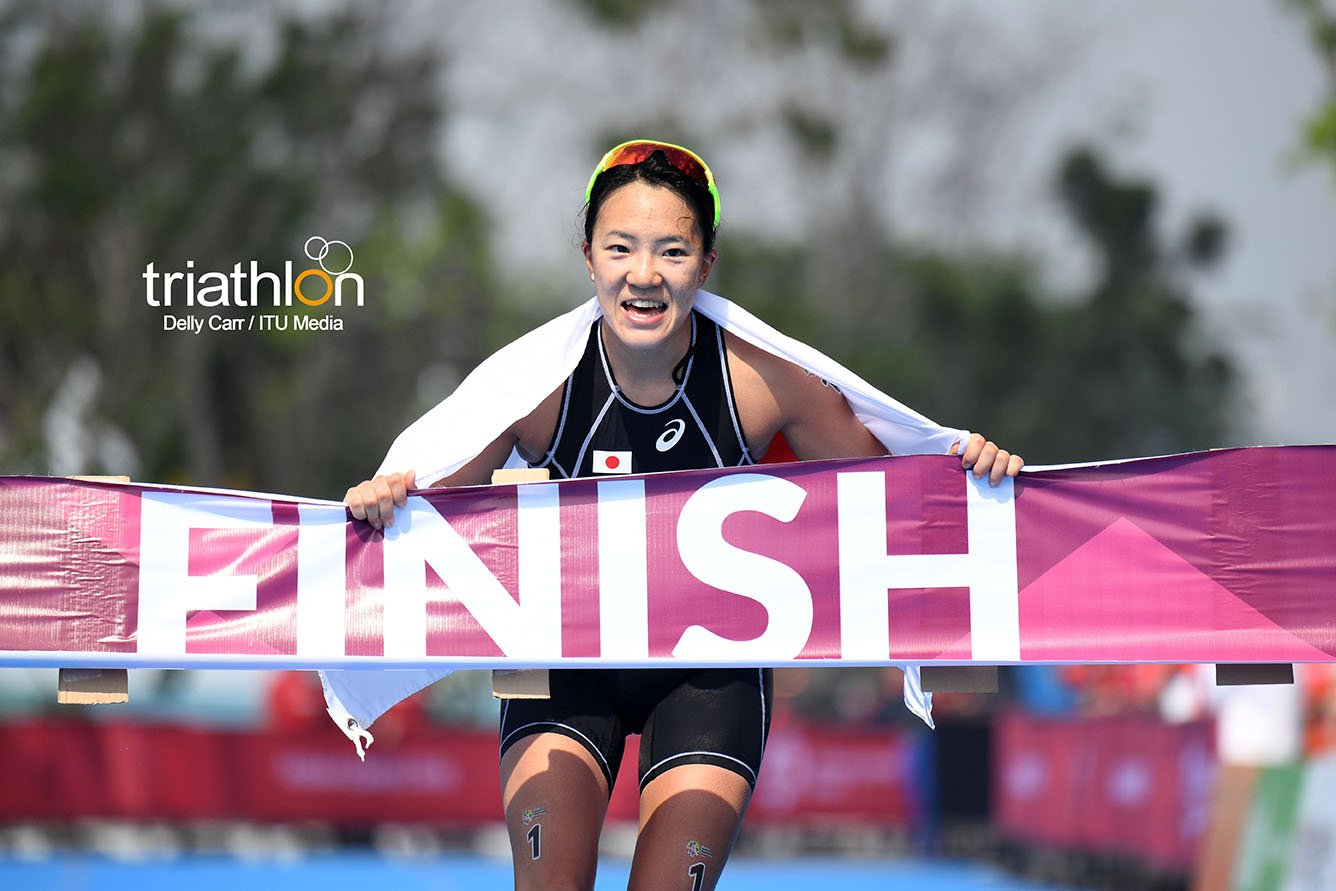 By Courtney Akrigg/ITU Media; all images by Delly Carr

In a dominating performance Japan’s Yuko Takahashi has claimed the gold medal to be crowned as the 2018 Asian Games champion in Palembang, Indonesia.

Firmly marked as the pre-race favourite, and wearing number one for Japan, Takahashi led the field of elite women across all three disciplines of the Olympic distance triathlon format.
Takahashi produced a spirited and victorious finish to claim the gold medal.

Takahashi clocked a finish time of 1:59:29 and maintained a significant gap of nearly 3-minutes, on the chase group of elite women, across the course of the race.

“It was hot weather and the water temperature was warm but I had a good swim, bike and run and had a good race. So many Japanese here, I was just so happy. I had a great race. I am just so happy with the win,” exclaimed Takahashi.

Takahashi led the field of elite women out of the 1.5km swim in Lake Jakabaring and onto the 6-lap bike course. Japan’s Yuka Sato, Zhong, China’s Yi Zhang and Korea’s Yun-Jung Jang exited the swim next to make their way out onto the next stage of the race.

Out on the bike course Takahashi proved that she had her sights fixed on gold and wasn’t going to let anyone move into the mix. The Japanese triathlete flew out of transition, set the pace to ride solo for the duration of the bike discipline.

In the final stages of the bike course Takahashi extended the gap and led the race by 2minutes45seconds. The chase group of women, riding and working together, included Sato, Zhong,Yi Zhang, Philippine’s Kim Kilgroe and Yin Yan Hilda Choi from Hong Kong.

Takahashi motored into the second transition to move swiftly out onto the 10km run course.

Sprawling behind the race leader were the same group of women, aware that they had work to do, to maintain a striking pair of heels, if they wanted a chance of podium contention today.

It was battle for second and third position, as the elite women blazed the hot pavement in Palembang.

Zhong maintained the pace in second place and Macau’s Hoi moved through into third position.

Takahashi was in a league of her own, displaying not only strong form but remarkable potential and motivation ahead of the prospect to compete, for Japan Triathlon, at the Tokyo 2020 Olympics.

Takahashi ran through the finish line to claim the gold medal of the 2018 Asian Games in the elite women’s triathlon event.

The Japanese triathlete claimed the win in her confident stride commenting on how special it was and what an honour it is to represent Japan at this level.

“I am so happy. The win puts me in a good state for Tokyo 2020 Olympics,” said the Asian Games gold medallist.

China’s Zhong came through the finish line to be awarded with the silver medal. Macau’s Long produced an impressive race, with a run time of 38minutes-13seconds to claim the bronze medal.

Sayaka Cakravastia from Indonesia finished in seventeenth position overall and was honoured to represent her country, and compete in front of a home crowd, at the 18th Asian Games in Palembang.

Seventeen (17) participating nations are in the mix of the triathlon competition at the Asian Games including Japan, South Korea, China Hong Kong and Macau.

Triathlon competition, at the 18th Asian Games, will continue tomorrow with the elite men lining up to contest

Japan's Jumpei Furuya races to victory at the 2018 Asian Games