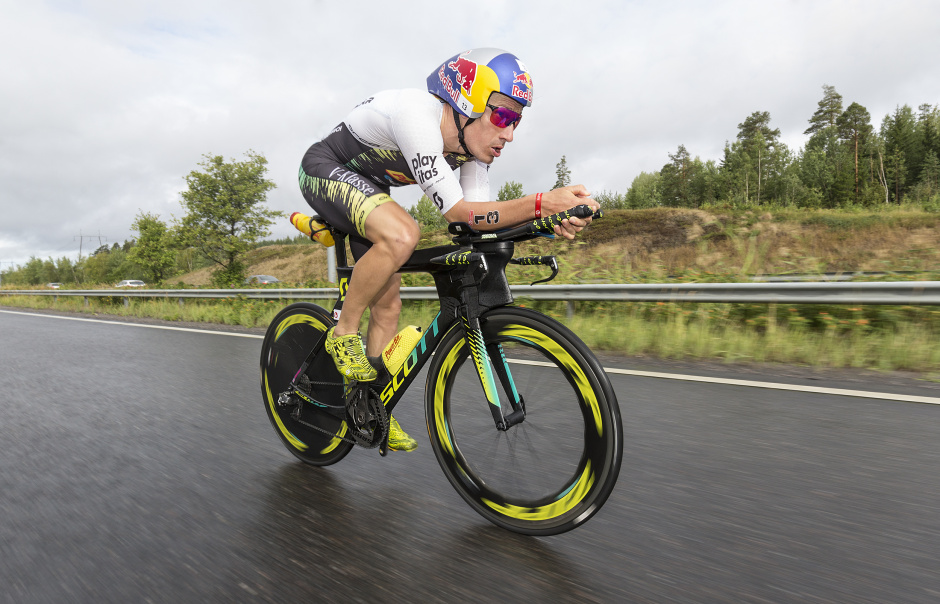 MEN’S RACE
Kienle came for one thing: winning the race and collect the points for the Challenge Family World Bonus – and he succeeded. “I did what I wanted to do”, he said with a big smile after the race. But he didn’t underestimate his opponents, especially Pablo Dapena with whom he was really looking forward to race. Knowing the running skills of Dapena, Kienle planned to push hard already during the swim. But he lost over 3 minutes on the the lead group with Dapena, Bækkegård and Davis, coming out of the water in 11th position. “It took me quite some time to get into the race and to get the engine going,” Kienle says, “That made me angry”. Obviously that frustration gave him some extra push on the bike as he closed the gap directly in the second lap. With an average  speed around 46 kmph he landed in T2 after 1:55:32, setting hist fastest 90k bike split ever. Dapena tried to run him down, but halfway the run he realised Kienle was already too far away. He finished 4:12 behind the winner.

See also:  GTN: How To Treat & Prevent Cramp | Stop Muscle Pain In Your Next Triathlon

WOMEN’S RACE
Sarah Lewis came out of the water together with Kienle – male and female pro’s started at the same time. She was accompanied by Claire Hann (GBR), but shared the lead for a long time only with Kerry Morris. Morris managed to set Lewis 40 seconds behind at the end of the bike course. But Lewis showed to have the best run legs and easily passed her. “It’s been a long time that I had raced, so i wasn’t sure at all”, Lewis says. “But it was a very flat, very smooth, and very fast race. And I got it!”

Turku’s ‘Race legend’ Yvonne van Vlerken, knew that is was hard to win today, as she did too many races the last week. But as she really felt in love with the Finnish race, she definitely wanted to come back to enjoy the atmosphere as much as possible while also being on the podium for the 3rd time.

Race Director Heikki Jaatinen was overwhelmed by all the kind and possitive comments of both pro and age group athletes, “I am grateful for the enthusiasm of 400 loyal volunteers and the help of all our partners, that we were able to show the hospitality and dedication of Turku.” ChallengeFamily’s CEO Zibi Szlufcik adds: “Challenge Turku offered world class field and amazingly fast race times. With 850 athletes and 26 different county represented, Sebastian Kienle and Sarah Lewis winning, and the unforgettable hospitality of the local community, the race is becoming a „must do“ Scandinavian venue! The Championship qualification slots and the CF World Bonus drive more and more Pro and Age Group athletes which we are proud of. Thanks go to the local Organisation team and the voluntiers . Kitos Turku”.