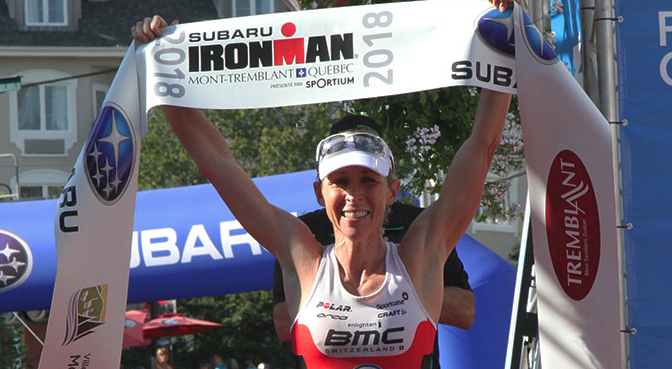 Antoine Jolicoeur Desroches (CAN), a local favorite in the Mont Tremblant area pleased his fan base from the get-go with a two and half minute lead coming out of the water. He stayed off the front for the opening km’s of the bike, but forfeited the lead to a hard charging Cody Beals (CAN) at 55 km. Beals, making his debut at IRONMAN racing, was in uncharted waters once the bike went beyond 90 km. The multiple IRONMAN 70.3 winner put his head down and waited for the Sanders train to make its appearance.

Beals hit T2 with a jaw dropping 6:39 advantage over Sanders and a new bike course record to boot. The Canuck headed out on the run where the expectation was that Sanders would unleash his potent run and bridge the gap to Beals at some juncture. For the first 20 km, the script unfolded as expected as Sanders reduced his deficit to Beals to just under three minutes. Over the next 5 km, however, the wheels fell off Sanders’ race and his deficit ballooned to close to five and half minutes. Beals continued his venture into the unknown on his maiden IRONMAN marathon journey and watched the gap to Sanders expand to over 13 minutes by the conclusion of the run. A humble Beals backed up his fastest bike split with a race best run of 2:49:22 to take the victory in a winning time of 8:10:36.

In the women’s race, Lauren Brandon (USA) recorded the fastest swim on the day as expected and completed the bike with over five minutes on Liz Blatchford (AUS) and Meredith Kessler (USA).

Kessler started the run flying through the first 20 km and forged her way straight into the lead. At that time, Blatchford was mired in third, close to four minutes off the pace of the leader. However, the Australia found another gear and started inching her way towards the front as Kessler faltered.

Blatchford would become the third and final leader on the run at 34 km and powered her way towards the finish line for the win, with Brandon hanging gamely onto second just over a minute back of the leader.

5 Bike Maintenance Mistakes Every Triathlete And Cyclist Should Avoid