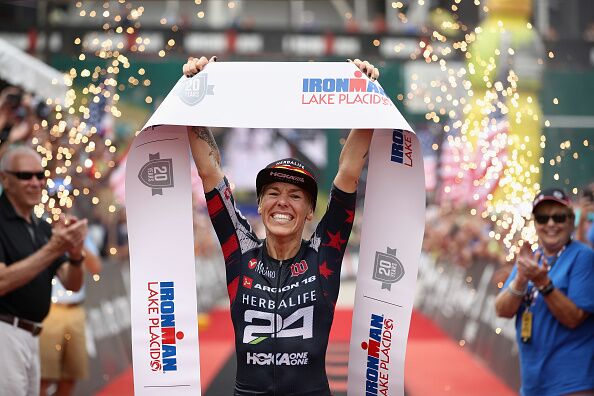 Heather Jackson (USA) was all smiles when finding herself in unfamiliar territory when she exited the swim in the lead. The defending champion would race solo for the remainder of the day on the bike and would never be under any real threat. Jodie Robertson (USA) and Jen Annett (CAN) keep the damage to just over four minutes for much of the ride with Annett exploiting her bike prowess by putting in a late surge in the closing miles of the bike, but only managed to reduce her deficit to Jackson to 2:46.

On the run, Jackson looked unbeatable while there was total carnage going behind her. Robertson, known for her swift feet, imploded early into the run and headed backwards quickly. Sarah Piampiano had an uncharacteristically poor bike that resulted in her coming into T2 over 25 minutes down to the leader. Annett was running with what looked like an insurmountable grasp of second place when abdominal issues reduced her to a walk in the first half of the run. The gutsy Canuck managed to pull a rabbit from her hat and made a full recovery in the second half of the run. Despite all the drama going on in the field, Jackson’s brilliant performance out front wasn’t overshadowed: she claimed the win at the 20th anniversary event by a winning margin of 15 minutes on Annett and over 24 minutes on Piampiano.

How To Make Your Drivetrain More Efficient