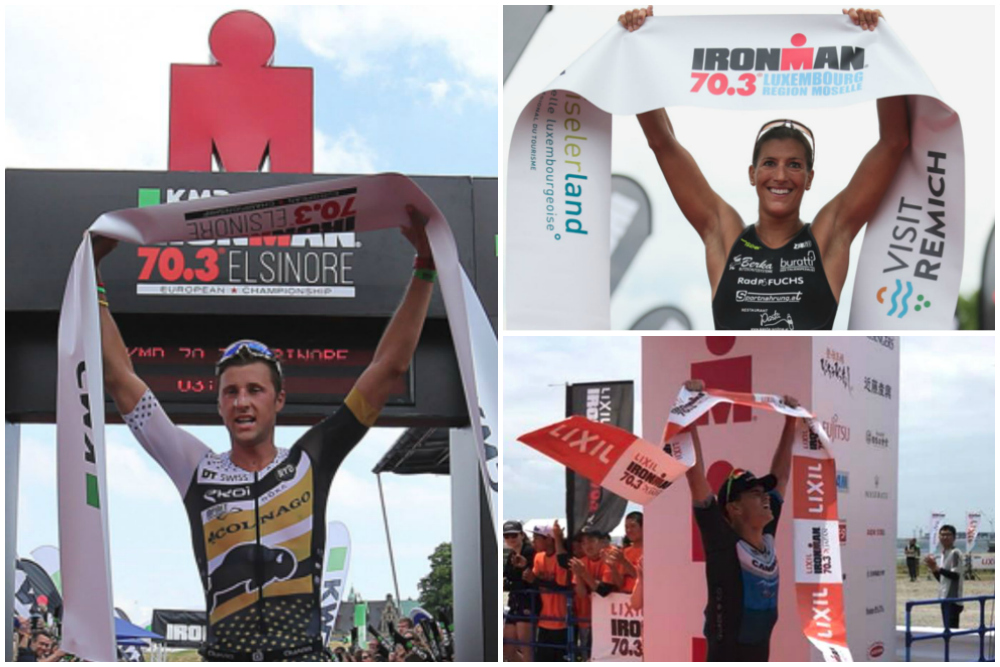 A thrilling battle dominated the KMD IRONMAN 70.3 European Championship, Elsinore both in the men’s and women’s pro race. Non-Europeans eventually claimed victories thanks to brilliant performances on the bike and run. While Europeans led the way in both races for the majority, it was on Aussie Melissa Hauschildt to bike and run into first place in women’s race while American Rodolphe von Berg took the title in the men’s competition.

Von Berg was among the co-favorites for Elsinore thanks to his fifth-place performance last year. While Australian Max Neumann ran into the mix on the final kilometers, the 24-year-old von Berg belonged to the leaders right from the start, together with Adam Bowden (GBR) and defending champion Michael Raelert (GER). Von Berg showed strength right from the swim and embarked on a duo ride with Raelert later on the bike course. These two nailed a 2:01-hour bike split on the flat but wet course, before the German three-time European IRONMAN 70.3 champion had to drop out due to a leg injury. With Raelert out, Bowden reclaimed the front of the race. Although von Berg knew about the extraordinary running talent of his opponent, Bowden, he didn’t throw-in when Bowden made the pass after 10 kilometers. Von Berg kept on pushing and nailed the fastest split on the final two kilometers to sprint into the lead again.

Hauschildt came out of the water with an expected deficit, but the gap of 2:43 to leader Helle Frederiksen was small enough for her to quickly bridge up to first place on the bike. Hauschildt paced herself in brilliant style, an effective way to make up a lot of ground. During the final third of the bike, Hauschildt downsized the gap decisively; when T2 was almost within reach, the 35-year-old made her move to pass the Danish leader. Frederiksen is well known as an enormously talented runner, but she had no chance to catch Hauschildt on the run. The former steeplechaser was focused and ready to take the IRONMAN 70.3 European Championship title two years after winning the continental championship on the tough course in Wiesbaden.

Strong bikers dominated the sixth edition of IRONMAN 70.3 Luxembourg. Thanks to a smart tactics, Swiss Manuel Kueng eventually celebrated his second win in Remich after 2015. As expected, French Romain Guillaume was at Kueng’s feet from the swim on. Once they embarked onto the bike course leading the field through the beautiful Mosel and wine region of Luxembourg, Guillaume and Kueng battled it out between themselves and the rest of the field. Only Marcus Herbst from Germany was able to stay the leader’s pace, but he had to pay for this effort later on the run. The rest of men’s field including defending champion Kenneth Vandendriessche was already way behind Guillaume and Kueng. Those two went together on and off the bike and again onto the run with small advantages on Guillaume’s side. Until 6 k to go, the Frenchman was leading the race with Kueng consistently 30 to 40 seconds back. On the final kilometers, Kueng then put the hammer down.

On the women’s side, Lisa Huetthaler, after taking the victory four years ago, dominated the challenging bike part once again. Huetthaler came from behind after a weaker swim with a shadow behind her: Brit Susie Cheetham. After biking within a stretch of always about 2 minutes, the experienced Brit tried hard to catch up with the Austrian on the run. Cheetham really gained some time on Huetthaler, but the 2014 champion finally took it again.

Two converts from other sporting backgrounds scored breakthrough victories at the IRONMAN 70.3 Japan.

Australian Lindsey Lawry, a former surf sport athlete who won a medal in his age group at the IRONMAN 70.3 World Championship last year won a wire-to-wire victory in the elite men. Lawry was out water with fellow Australians Sam Douglas and veteran Luke Bell in 24:53 and opened a gap late on the bike with a 2:12:14 effort. He took a 2:30 buffer on Bell and Douglas on to the 21.1km run, but the challenge ultimately came from another Australian, Mitch Kibby. Down 5:38 off the bike, Kibby, a well-known performance coach, produced a superb 1:16 run to close within sight of Lawry but came up 80 m short in the final dash. Lawry’s swim-bike established sufficient safeguard to withstand the dash from the back despite a 1:22 run.

Meanwhile, compatriot Grace Thek used her running prowess to earn her first IRONMAN 70.3 victory after finishing runner-up at Geelong earlier this year. The former US college scholarship runner was 90 seconds down on Guam’s Manami Iijima out of the swim, before American Christine Cross rode through to the front to take a 1:15 buffer on to the run. Thek had a run best of 1:28:55, hitting the front at the 17k mark and going on to win in 2:32:07 with 1:15 back to Cross and 2:45 to Iijima.