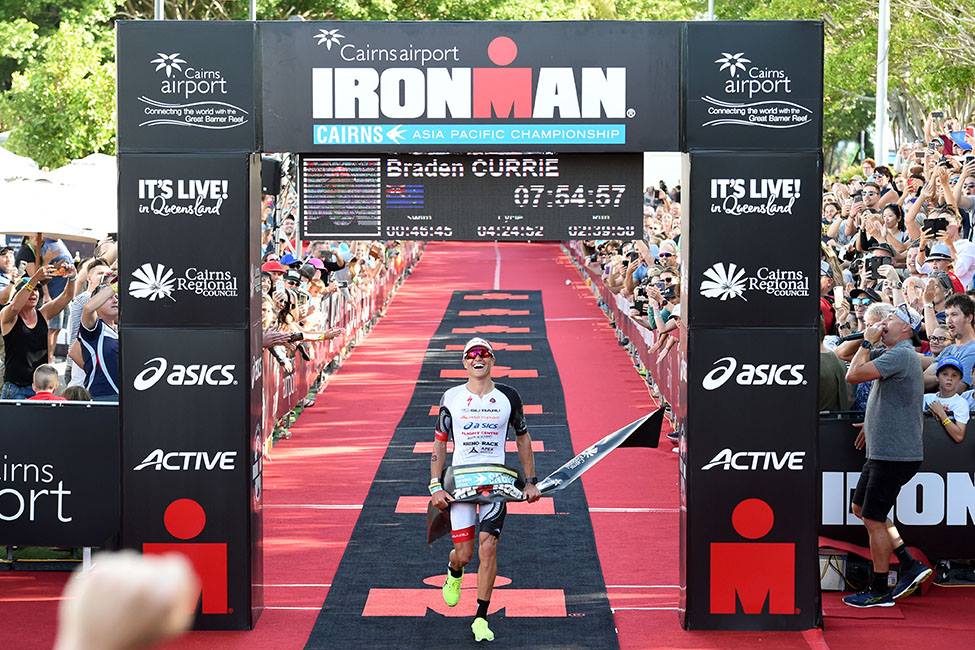 The country of New Zealand posted double victories as Kiwi’s Braden Currie and Teresa Adam won their professional elite categories at the Ironman Asia-Pacific Championships in Cairns.   Their wins automatically qualify them a spot at the Ironman World Championships at Kona this October.

Currie battled with multiple ITU and Ironman 70.3 world champion Javier Gomez of Spain, who was making his iron-distance debut.   Currie and Gomez ran side by side until the 34th kilometer when Currie made the breakaway move.

“I had a good moment at the right time at the 34km mark on the run which was probably the only moment when Javier slowed. I went for it and managed to stick it and go on. To crush the eight hours is a real bonus.”

They had battled a impressive pro field that included Terenzo Bozzone who finished 3rd at 8:00:07.  Bozzone is having a scintillating season, having won all four races he had entered prior to Cairns.   Bozzone had won Ironman New Zealand and three Ironman 70.3 races this year.

Teresa Adam, a former ITU athlete and water pro for New Zealand, has had a string of injuries for years, and came back to the sport last year, trying her luck in longer distances.    Adam amzingly finished second this March in Ironman New Zealand, getting a rebirth to the sport she love.

“I couldn’t believe that I’ve won it. I just can’t believe it,” said Adam. “I have had so many injuries for so many years that I only started longer distance stuff for fun. To win this today is quite weird.

Adam held off multiple Ironman world champion Mirinda Carfrae, on account of her 2nd best swim at 50:42 and the a women’s best 4:50:13 bike split.

Carfrae had reduced Adam’s lead to four minutes at km 25 but Adam held tough on the lead.  “I was pacing myself and I had targets and was not concerned with what others were doing around me. I thought Rinny [Carfrae] would race past me.”

Cairns Countdown is on for Ironman Elite

WTS Abu Dhabi 2020 postponed due to the Coronavirus outbreak
March 3, 2020