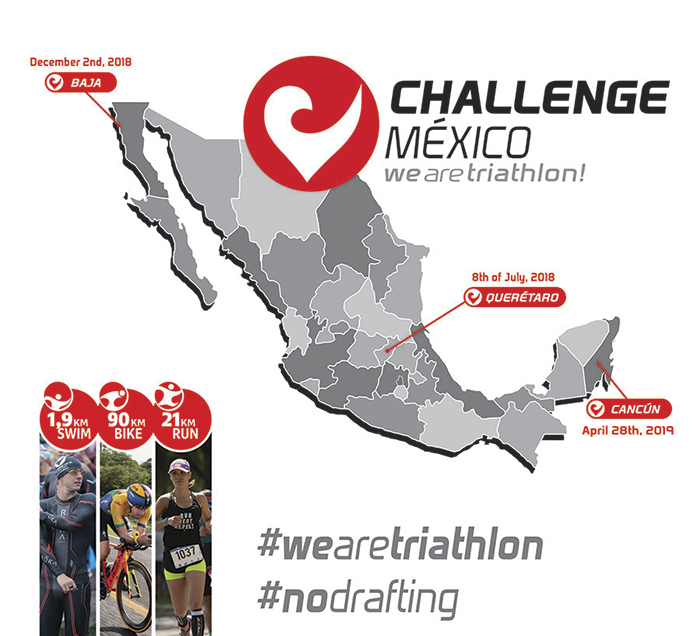 In two of the most iconic places on earth CHALLENGEFAMILYwelcomes two spectacular new races in Mexico: CHALLENGEBAJAat the Californian peninsula at the west coast, and CHALLENGECANCUN at the far east side of the country at the Caribbean shore. Together with CHALLENGESANGIL both Baja and Cancun present the CHALLENGEFAMILY Mexico Series.

“We seek to manifest these venues for the events in years to come, and at the same time, position Baja as a natural venue for triathletes, in Southern United States , internationally and obviously Mexico. While, for Cancun, we would like nothing more than to host the AmericasCHALLENGEFAMILYChampionship in the near future”, said Juan Antonio Casarrubias, Founding Partner of CHALLENGEMEXICO.

CHALLENGEBAJA will take place at the 2ndof December 2018 and CHALLENGECANCUN will follow on April 28th, 2019. ,,In a triathlon dedicated country like Mexico the triathlon circuit of CHALLENGEFAMILYcould not be limited to just one event.” To compare it with a European perspective: Baja and Cancun are more distant from each other than all the European races together. ,,That’s why with two more venues we’ll have the CHALLENGEFAMILY Mexico Series”, Casarrubias continues, ,,CHALLENGEMEXICO is committed to continuing and advancing with the philosophy that has distinguished CHALLENGEFAMILY globally by making this series of events an unique experience for the participants.”

For CHALLENGEFAMILY’s CEO Zibi Szlufcik it’s is an important step to expand with the both races. ,,It’s great development for the brand to introduce CHALLENGEBAJA and CHALLENGECANCUN to our family. Athletes and Families now can race, participate and enjoy two amazing destinations in most beautiful regions of the World. Athletes can rely on the high quality our races always offer and CHALLENGEFAMILY  Team in Mexico will go beyond and above to deliver #AllAboutTheAthlete performance.
Baja Ensenada is a fantastic venue to provide a spectacular final to your triathlon season, while Cancun will be an amazing season opener where both could be nicely combined with a Training Camp or Family Holidays.” At both races top 6 male and female in every age group will qualify for THECHAMPIONSHIP to be held on June 2nd 2019 at the x-bionic sphere Samorin, Slovakia as well as top 5 male and female professional athletes.

How To Improve Your Run Cadence | Triathlon Running Tips