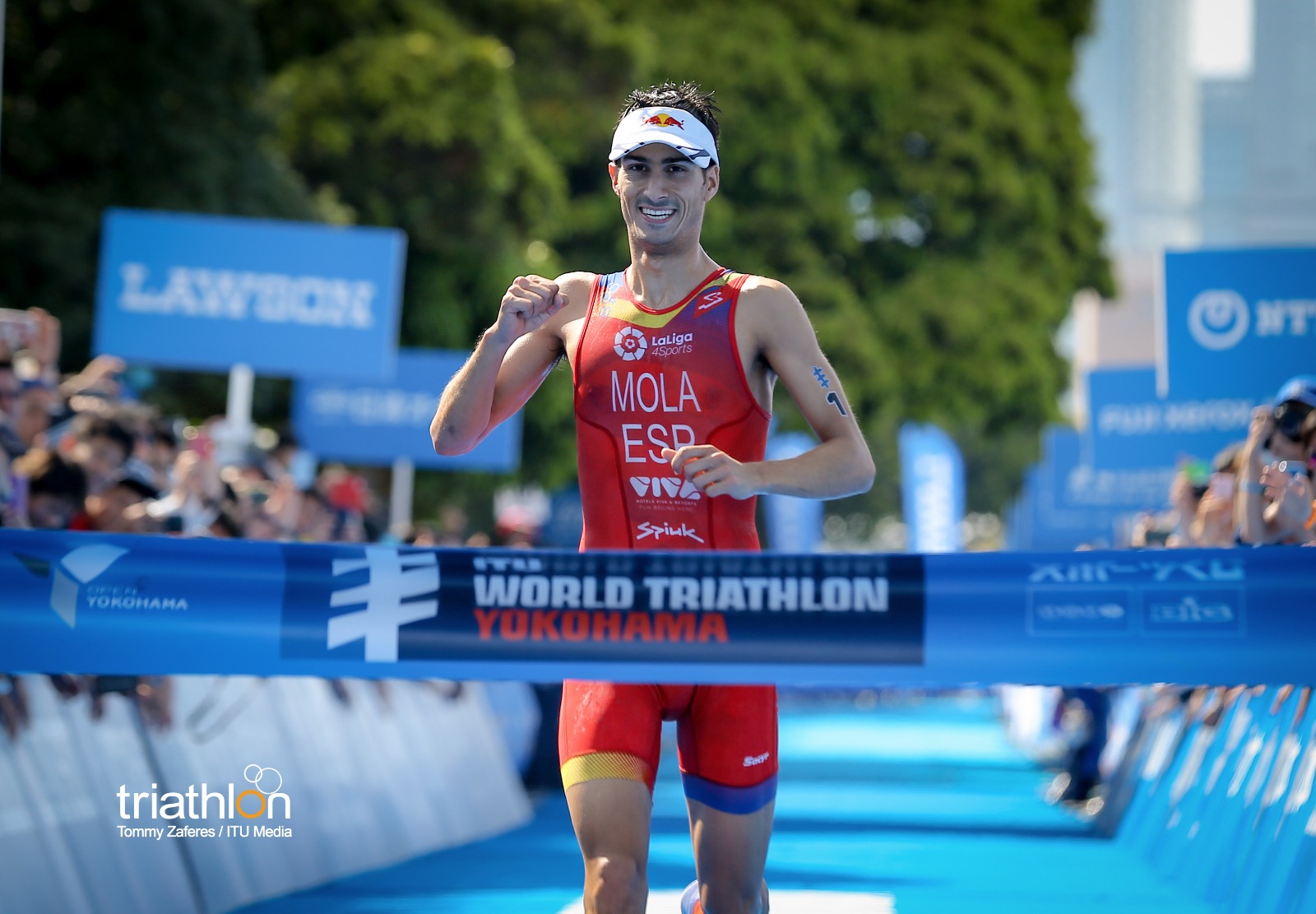 Saturday saw yet another WTS performance for the history books as Spain’s Mario Mola delivered a record third successive victory at the 2018 ITU World Triathlon Yokohama. Mola put in one of the best swims of his career, survived a massive bike pack and then broke away solo to dominate the run section and become the first man in WTS history to record a trio of back-to-back wins in Yokohama.

“That was probably one of the best swims I have ever had, I am so happy with that. It really makes the race completely different,” said Mola after his win. The Spaniard, who went out on his own in the opening strides of the run, said of his strategy; “It was one of those things that you only do once you are in the race and you see people around you. I was feeling good, I was feeling strong, so I decided to push from the beginning and see what happens.”

The Yokohama win was Mola’s first WTS gold of the 2018 season, leaving him top of the Series rankings.

“Obviously, it hasn’t been the easiest three weeks. Seeing Carol (Routier) fighting after the accident, it was unbelievable. Everyone around me was making me feel very strong in order to be close to her, so this obviously goes to Carol,” said Mola, speaking of his girlfriend who was recently involved in biking accident.

The silver and bronze medals went to two men equally eager to get back onto the WTS podium, Australia’s Jacob Birtwhistleoutsprinting Spaniard Fernando Alarza to take second place and secure his first WTS podium since July 2017. Bronze for Alarza was his first WTS podium finish since June last year.

Birtwhistle said of his sprint finish, “I was pretty spent, this was my first Olympic distance race since November. I didn’t really know what to expect going in since I have been training solo the last couple of months. It’s great to be back on a start list again and to finish it up. I have started to become an expert at the sprint finish at the end, so I guess I am qualified to say that it is the hardest way to do it. I just had to dig deep, I was suffering in the middle but I just held on.”

The men lined up following the women’s race, with both events beginning the fight for qualifying points for the Tokyo 2020 Olympic Games.

Diving into the water, Richard Varga (SVK) returned to form to led for the full 1.5km, exiting the swim in first place for the 24th time in his career. He was anything but alone, however, as almost the entire field climbed the ramp out of the water and entered the transition zone as one. After a battle to get onto the bikes, a large lead group inevitably formed.

The opening stages of the 40km, nine-lap bike course saw a 40-plus group riding side by side. It looked a sure thing that breakaways would soon follow but none materialised, the train of men snaking through the course lap after lap with little change.

Behind them, a chase group included several podium hopefuls whose swim had left them just off the pace, among them Mexico’s Crisanto Grajales and the WTS Bermuda bronze medallist Gustav Iden (NOR).

As it had through T1, the lead pack entered T2 together, every member fully aware that their performance in the run would be decisive in the hunt for WTS gold. It was Mola who wasted no time getting out onto the course and into his rhythm, powering through the herd into pole position.

From there, the lead simply increased with every stride, the Spaniard stretching away from the other medal contenders behind him. Nobody was able to find an answer to Mola’s determined pace as he built up a 30-second lead, and it was to be a comfortable finale as he entered the chute to complete the 12th WTS win of his career and the first of the 2018 season.

The battle was still very much on for second and third, however, with Birtwhistle and Alarza using their fresher legs to pull ahead of the rest. While Alarza held a slight advantage over the Aussie for the majority of the 10km, it was Birtwhistle who timed his move in the final kilometre to bag silver, leaving the Spaniard to take the bronze.

“I am really happy to come back to the podium. I’ve had some difficult months. In the winter it is hard to find good moments when your head is bad, but I am really happy with the last month and to get back on the podium,” Alarza said.

Another huge performance on the day came from Canada’s Tyler Mislawchuk, who successfully emerged from a tight pack in the run to land a career-high fourth-place finish.

Bermuda’s Flora Duffy collected the first win of the Tokyo 2020 Olympic qualifying period on Saturday, landing another brilliant gold at the 2018 ITU World Triathlon Yokohama. Winning here for the second year in succession, it was also a second straight win of the season following her home-turf gold in Bermuda last month.

“Coming after such a high in April from the Commonwealth Games and Bermuda it was definitely a stretch to get here. I am very happy with my race, I often don’t get enough credit for my running, I came off the bike with a group of really strong runners,” Duffy said of her win.

Duffy continued her streak of strong race consistency from start to finish after leading out of the swim, remaining in the lead bike pack and then stealing the race away in the run, which ultimately left her at the top of the Series leaderboard in the WTS rankings.

“That is very cool, I was not expecting that today, that was not the goal. It was just to get a good score and set myself up for the Series, but if I am top then I can’t complain,” Duffy added after finding out her Yokohama win left her top of the Series.

Claiming the silver medal was USA’s Katie Zaferes who also collected her second straight WTS podium of the season. Non Stanford (GBR) finished with the bronze, her first WTS podium since 2016.

Zaferes said of her silver-medal performance, “I am so excited, I feel like I was in good form and I also was a little tired after Bermuda, that second lap on the run I was feeling real rough. Thankfully I brought it back together for the third and the fourth (laps) so I am really happy with it.”

The Yokohama race was the opening race of the two-year Olympic qualification period, and a slight chop in the water welcomed the women as their dive officially kicked off the long road to Tokyo 2020.

Two 750-metre laps awaited them in the second standard-distance race of the season, and USA’s Summer Cook pushed ahead in the first, getting the time stamp before the second dive. Duffy remained right on her heels, though, and in the second lap she overtook the leader to exit the waters first into transition for only the second time in her career.

For the first lap on the bike it looked like Duffy and Zaferes might keep a successful breakaway as they created a gap out of T1, but with one of nine returns completed and Great Britain’s Jodie Stimpson pushing, a pack of nine women joined the front duo.

While some strong names remained in the main chasing group, including Australians Ashleigh Gentle and Charlotte McShane, they couldn’t find the edge and close the gap, which remained around the minute mark for the duration.

Despite a few attacks from Duffy through the final laps, no further breakaways stuck and the leading nine rode into the second transition together, the gap to the chase now 1:14.

After a tough ride, Stimpson and Duffy were the first and freshest out of the transition gate followed by Zaferes. Then Duffy and Zaferes overtook Stimpson and once again were locked side-by-side out front.

Duffy wasted no time in showcasing that she has also become one of the top runners in the field. The Bermudian blasted away from Zaferes in the first lap and never looked back, holding onto a lead that was never truly threatened. Duffy entered the finish chute in control in Yokohama for the second year in a row, this year capturing the fastest run split of the day at 33:26.

Zaferes stayed strong in the silver position and never faltered, finishing 33 second behind Duffy to improve on her Bermuda bronze in April.

It was an impressive run by Stanford that secured her the bronze medal, bypassing Stimpson to take control on the 10-kilometre course and hold on tight to the final podium position, something she hasn’t managed since WTS Cape Town in 2016 following two hard years of injuries.

“In all honesty I spent last night Googling job applications and I was reading this morning what I have to do for this particular job, I just didn’t expect that today,” said Stanford. “It has been a really tough two years, I have gone through a lot of up and downs. This sport can be super cruel and super tough, but it has just taught me that if you stay patient and keep plugging away, you can get back up there really.”

Australia’s Ashleigh Gentle had a noteworthy performance with one of the fastest runs of the day. Coming off the bike with a deficit of 1:14, she was able to find her way into fourth place

How To Calculate The Correct Chain Length | Road Bike Maintenance