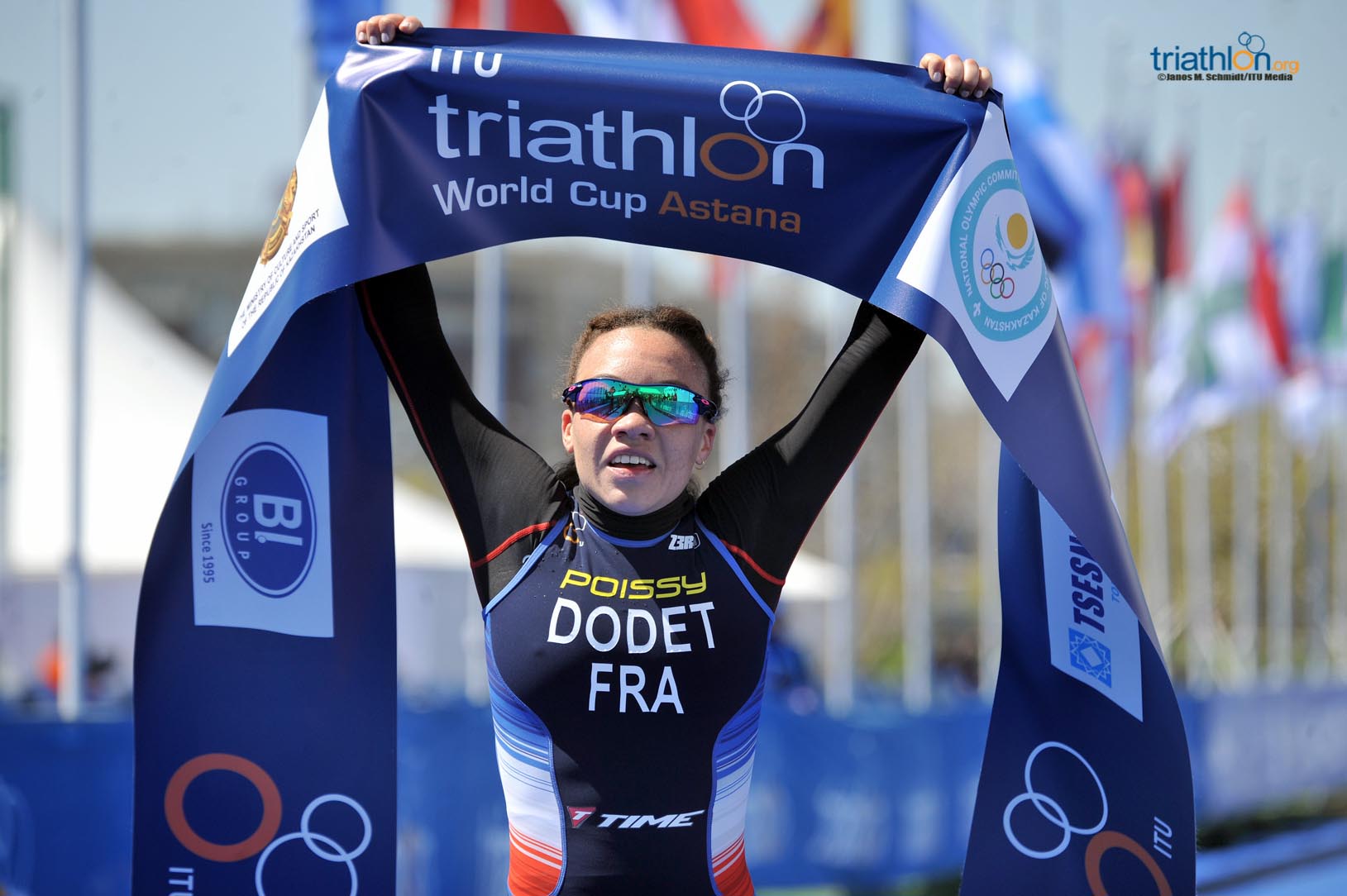 Saturday saw Astana make its debut on the ITU World Cup stage, with athletes pursuing Olympic qualification points for Tokyo 2020 as well as the honour of being first atop the podium in the Kazakhstan capital. The new-look ASICS World Triathlon Team was also together for the first time since the partnership’s unveiling, adding yet another layer to an already eagerly anticipated race.

With overnight temperatures dropping, even the glorious sunshine that greeted the athletes could not help overcome a biting wind, leaving ITU and the LOC with no option but to change the format of the women’s race to a duathlon for the athletes’ safety. That meant a 5km run, 40km bike and 10km run format, leading to some thrillingly tight racing ending with a heroic final flourish from Sandra Dodet of France. By the time the men lined up, conditions meant that a sprint swim was possible, and it was Russia’s Dmitry Polyanskiy who took the honours after executing a near-perfect run.

Women’s race
The women took the line for the opening two-lap run and jockeyed for position through the early stages of the winding course, Russia’s Yuliya Golofeeva setting a steady pace with nobody looking to stretch things too soon in the race.

By the time the athletes were well through T1, Australia’s Tamsyn Moana-Veale and South Africa’s Gillian Sanders were among a large pack that was headed by Valerie Barthelemy (BEL) and ASICS World Triathlon Team member Kaidi Kivioja (EST).

The eighteen leaders extended the gap at the halfway point, among them no fewer than six members of the French team including Justine Guerard, Emilie Morier and Margot Garabedian. Working well together, the lead was soon stretched to over two minutes from the small group led by Elena Danilova (RUS).

See also:  21 Teams Will Fight in Hamburg for the Mixed Relays Crown

Out of T2 it was Italy’s Angelica Olmo who assumed the front spot, Britain’s Lucy Hall and Gillian Sanders exiting side-by-side and hoping to remain in touch. Soon, though, it was the French trio of Dodet, Guerard and Morier looking in control as they established a five-deep lead group.

Then, with two laps still to go, Dodet lay down the gauntlet and pushed ahead on her own. Neither Morier nor Olma could go with her, and with a first World Cup win in her sights, it was the 21-year-old who carved out a 36-second advantage going into the chute and took the tape. Emilie Morier was clearly delighted to be joining her on the podium in second, with Angelica Olma finishing in third. Sanders came home in sixth place, while ASICS World Triathlon Team’s Kaidi Kivioja finished in eleventh.

The full men’s results from Astana are available here

Men’s race
By the time it came to the men’s race, the afternoon sun had warmed things up sufficiently in Astana to ensure the swim could go ahead, with one of the planned two laps of the Ishim River course getting the action underway.

Hungary’s Mark Devay took the advantage with a strong swim, coming out of the water ahead of Aurelien Raphael (FRA) and Peter Denteener (BEL). The top-ten through T1 was jam-packed with quality, though, and by the time a nimble group of nine had emerged, the vast swarm left in their wake struggled through the tight sections of the course and never cut into an ever-growing gap.

Russia’s Polyanskiy brothers, Igor and Dmitry, were working together well in the saddle, with Australia’s Marcel Walkington and race No.1 Bence Bicsak (HUN) also looking comfortable as they powered through the six laps. Indeed, at the bell, any one of the nine looked like they could find their way onto the podium, and it was Jonas Schomburg (GER), Raphael and Walkington first out of the final transition.

The Franco-Australian partnership was soon bearing fruit, with the pair taking it in turns out front and finding a 10-second lead over Polyanskiy. Raphael pushed, but Walkington kept close, then at the final u-turn with just over a kilometre to go, the Russian’s lighter legs saw him gain ground up the ramp, Polyanskiy galloping up the final stretch to take the tape ahead of Walkington in second and Raphael in third.

The full men’s results from Astana are available here