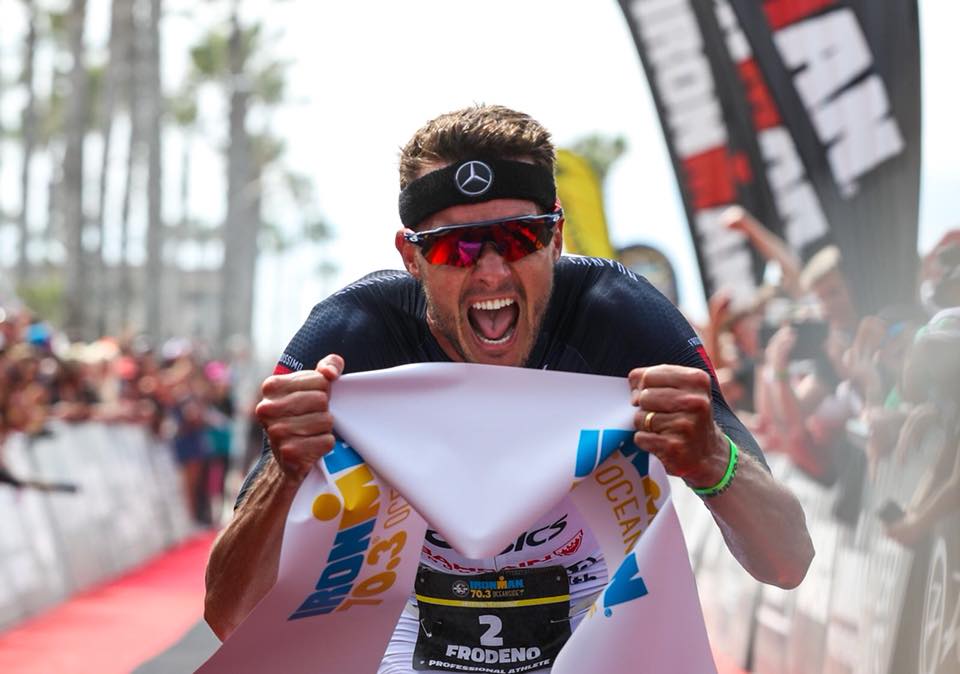 Close to perfect conditions welcomed a top class field at the Oceanside Harbor on Saturday for IRONMAN 70.3 Oceanside. This race is always a big field for the pros, but this year it was a who’s who of world championship podium finishers, and IRONMAN and IRONMAN 70.3 champions.

The men’s race was sure to be a battle between Jan Frodeno (DEU) and Lionel Sanders (CAN) and it was indeed. Frodeno led the race out of the water with Eric Lagerstrom just behind and a gap to the chasers of a minute, but most importantly two and half minutes to Sanders. Although this was a great swim by Sanders, this gap proved too advantageous for Frodeno; he was able to settle into his pace on the bike early and really put on the effort in the final miles. Onto the run with a two-and-half-minute gap he strolled away to a comfortable 1:10 run split while Lionel held off a fast running Tim Reed (AUS) for second place. Fourth went to a well paced Eric Lagerstrom in his debut IRONMAN 70.3 while Rudy Von Berg (USA) held on to fifth after fighting early for a podium position.

In the women’s race, we had a bit of an IRONMAN 70.3 World Championship preview with one major exception, Daniela Ryf (CHE). Holly Lawrence (GBR) came in with the local course advantage and took out the lead early gaining a 2.5 minute lead on Anne Haug (DEU). These two kept around the same gap most of the ride with Haug only pulling back major time in the last 20 miles to come off the bike 1:50 down from the leader. Heather Jackson (USA) pushed well on the bike to come off 5 minutes down while Sarah True (USA) and Jeannie Seymour (ZAF) were another two minutes back. Anne delivered a ridiculous run split of 1:16 to take the victory with a four minute cushion. Sarah True moved her way into third by runs end while Jackson and Seymour finished fourth and fifth, respectively.

There was a chill in the air throughout most of the race day in Galveston, but that didn’t put a damper on some hot performances out on the course.

Ben Kanute (USA) showed the way in the swim and led for most of the opening half of the bike. Not unexpectedly, Andrew Starykowicz (USA) nudged his way to the lead and managed to carry a tentative 1:39 lead on Kanute as the pair completed the two-lap 56-mile bike course. The remainder of the field was well off the pace and facing deficits of well over five minutes to Starykowicz.

It was evident right from the start of the run that Kanute had a better bounce to his run of the lead pairing. Kanute would make the pass for the lead at 2.5 miles into the run and would never look back until he grabbed the finish line banner for the win. Starykowicz would eventually succumb to the torrid pace laid down by Michael Weiss (AUT) who would claim the runner-up spot on the podium, while Starykowicz was left to settle for a third-place finish.

Kimberley Morrison (GBR) looked like she had the race well in control after knocking off the fastest bike split on the day and was rewarded with a leading gap of close to four minutes on Mel Hauschildt (AUS) heading out on the run.

The fairytale ending for the defending champion started to unravel as Hauschaildt, Heather Wurtele (CAN) and Mirinda Carfrae (AUS) began to immediately chew into the leader’s advantage in the opening miles of the run. Morrison’s demise was slow and deliberate as the hard-charging trio closed in for the kill at the end of the first half of the run. Hauschildt would be first to overtake Morrison, then Wurtele, and eventually Carfrae would power by Morrison. Hauschildt would be the dominant runner on the day and that left Wurtele and Carfrae to duke it out for second. Carfrae would come out on top of that battle to claim second, marking her return to racing after for the first time since the birth of her daughter.