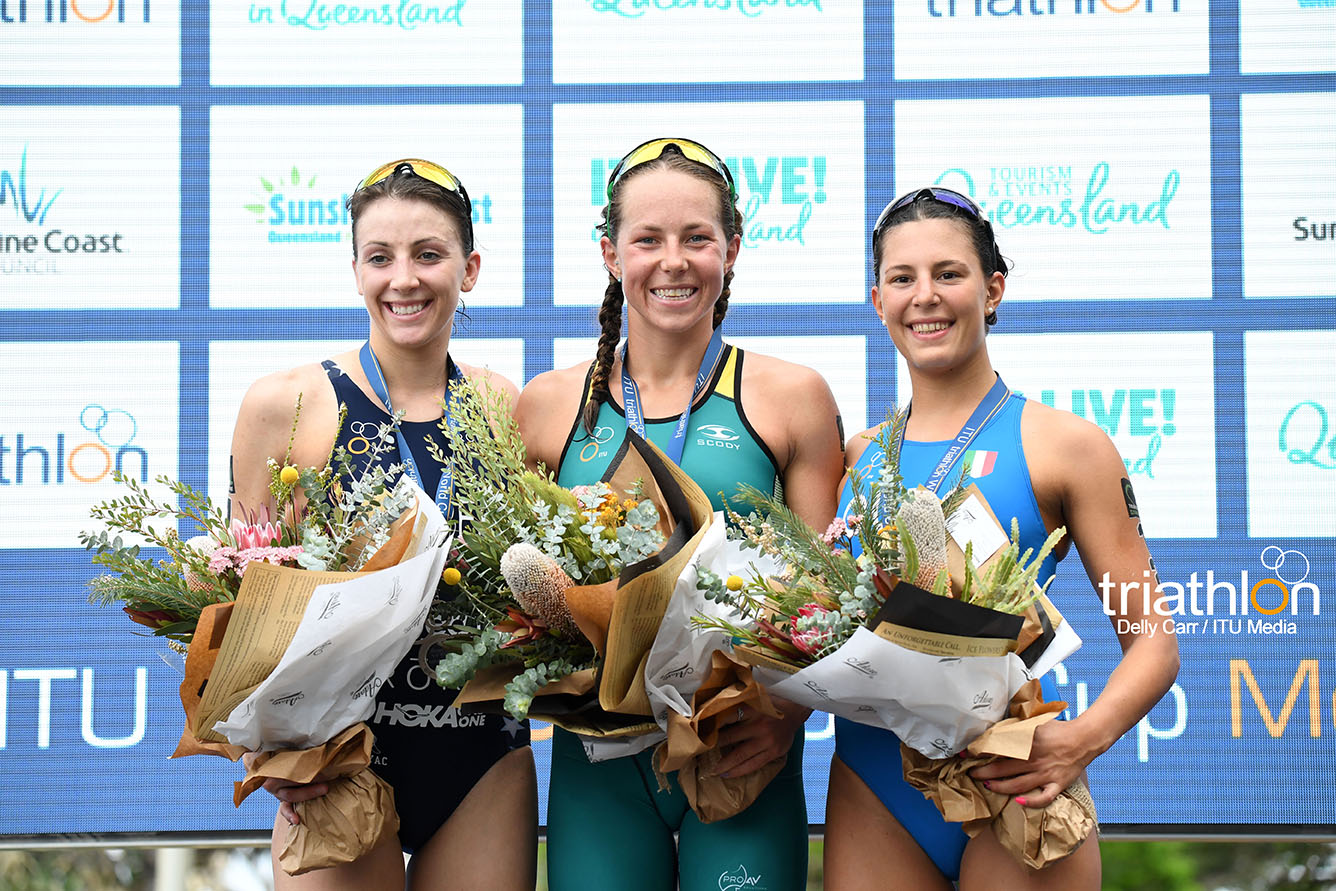 ITU athlete Max Stapely, currently training in Australia, led the group of nearly 30 men out of the ocean swim, including New Zealand trio Sam Ward, Hayden Wilde and Tayler Reid, Brandon Copeland, Luke Willian and Ryan Bailie from Australia and Canada’s Tyler Mislawchuk, as they hustled through transition and out onto the bike course, consisting of 4 laps of 5km.

In the early stages of the race it was Wilde that was showing established form ahead of the massive group of riders which included Willian and Murray, 40-seconds down on the leaders.
Murray proved that he was a force to be reckoned with looking to get to the front of the group for a fast transition to run.

As the athletes emerged from their second transition there were no doubts that this was going to come down to a wild and frantic running race. Wilde was one of the initial front-runners before Murray and Hauser steamed away from the field to lead. America’s Matthew McElroy produced a reckless run holding onto third place.

“It managed to all come together. I was really pushed on this one. “Matt (Hauser) turned the gas on in those final laps,” said Murray. The South African triathlete was determined to make his mark on Mooloolaba this year and produced a victorious golden finish.

“That was a lot harder than anticipated. 2nd time on the podium here and now top step,” said Murray.

Australian triathlete Hauser, who was crowned Junior World Champion at the 2017 ITU World Triathlon Grand Final in Rotterdam, put Murray to the test on the run. “It was a great hit out today ahead of the Commonwealth Games in April. “I managed to handle myself on the bike and stay tucked into the pack and was able to have a bit of a kick at the end and come home for second place,” said Hauser.

Murray’s race in Abu Dhabi last week didn’t go accordingly to plan so today’s win in Mooloolaba stamped confidence as he commences his final preparations for the Commonwealth Games next month. Murray and Hauser will go head to head again in the world class competition of next month’s Commonwealth Games on the Gold Coast, Queensland.

McElroy bolstered across the finish line to claim bronze and round out the elite men’s podium. “Super stoked with the performance and to be on the podium to set the year off.

“It was the perfect course for me, I have a surfing background so the swim was great and I also come from a running background,” McElroy said.

Defending champion Willian, who played a little cautious in preparation for next month’s Commonwealth Games, took out 8th position.

Australia’s Emma Jeffcoat was the one to beat in 2018 ITU Mooloolaba World Cup today. Championed with a home crowd, Jeffcoat dominated today’s race to win gold and step on top of the World Cup podium.

With a strong Australian surf background, it was no surprise that Jeffcoat led the field of women out of the 750m ocean swim solo, in favorable conditions, before heading onto the 4-lapped bike course.

“That’s racing, you’ve got to play to the conditions and I am lucky to have a surf background that let me get that advantage to set up for a good race,” said Jeffcoat.

It was a slight battle for chief position out on the technical 20km bike leg with Kasper leading in the early stage, Jeffcoat sitting tight on second wheel and Van Der Kaay and Italy’s Angelica Olmo putting the pressure on to stay with the leaders.

On the second lap Van Coevordon took control, Kasper was in pursuit while McShane, Salt and Kretz were 15-seconds down from the front group and by the final lap this gap had extended to 45-seconds.

Jeffcoat made a remarkable impact on the bike, put the pedal down to charge into transition as race leader. The Aussie showed no signs of slowing down as she produced a slick transition to hit the pavement with a strong lead for the 5km run in Mooloolaba.

On the final lap of the run course Jeffcoat looked like a front-runner ready to strike as she stormed across the finish line to be crowned race champion.

“It’s an awesome result. I just focus on process and when my process is executed on I get my outcome,” Jeffcoat proudly said.

Kasper, a run specialist, wasn’t letting Jeffcoat out of sight however didn’t quite have the turnover to play catch and claimed the silver medal today.

“Emma was the one to beat today. She was full on right from the start. I just tried to give it my all. It’s not like me to fall off that early but coming off Abu Dhabi I can’t complain with that result,” said Kasper.

It was Olmo from Italy who produced an impressive performance to round out today’s podium with a bronze finish.  “First podium, so happy. I worked really hard this Winter and I wanted to achieve a result like this so I am really surprised but happy,” Olmo said.

World Triathlon Executive Board reschedules events to September 2020
May 18, 2020