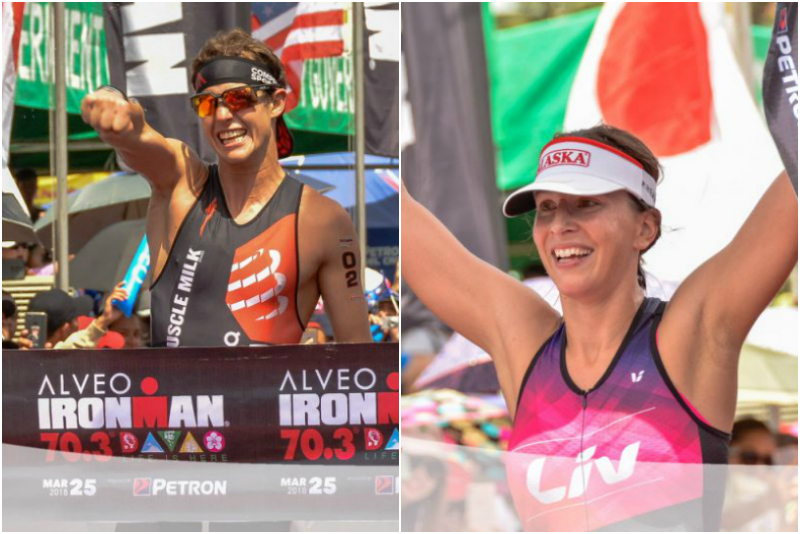 A group of four that includes McMahon, Mendez, Reed and Betten immediately took the lead in the opening kilometers of the purely flat bike course.  Approaching the 1st quarter, the lead pack has opened a 1 minute lead over the chase group that includes Van Berkel, Weisee, Allen, Alexander and Buckingham. Nearing the 50km mark, the chase group has caught the lead group, and Kyle Buckingham too charge of the lead, with a nearly 1 and half minute lead.  The South African was followed closely by Van Berkel, Reed, Mendez and Alexander.

After the 75km mark, Kyle Buckingham had extended his lead to over 2 minutes to Van Berkel and Reed.   The chase group of Betten, Alexander, Mendez and McMahon was 3 minutes behind.

By the 1st 5km of the run leg, Reed and Berkel had sliced off Buckingham’s 2 minute lead.  By the 6th kilometer, Reed had taken the lead, and padded a lead into nearly a minute over Van Berkel.  Mendez was 1:46 behind at that point, and Alexander 2:06 behind.

Mendez continued to push hard on the pace and slashed Reed’s lead into half going into the halfway mark.   The young Mexican Mendez caught Reed at the 16km mark and never looked back, pushing his way to a race-best 1:16:14 to win in a fast 3:50:30 in tough hot conidion in Philippine soil.   Reed was able to secure 2nd place, 1 minute and 54 seconds back.   Van Berkel completed podium in 3:53:43, 3 minutes and 13 seconds back. New mom Radka Kahlefeldt, who three months ago gave birth to her daughter Ruby, led from the start and was never threatened in her comeback race.

Kahledfeldt dominated the bike leg, being with a group of local Filipino elites and was able to secure the women’s best bike split of 2:23:35, and also a T2 lead of 7 minutes ahead of Seidel, and 10 minutes on Tyack.