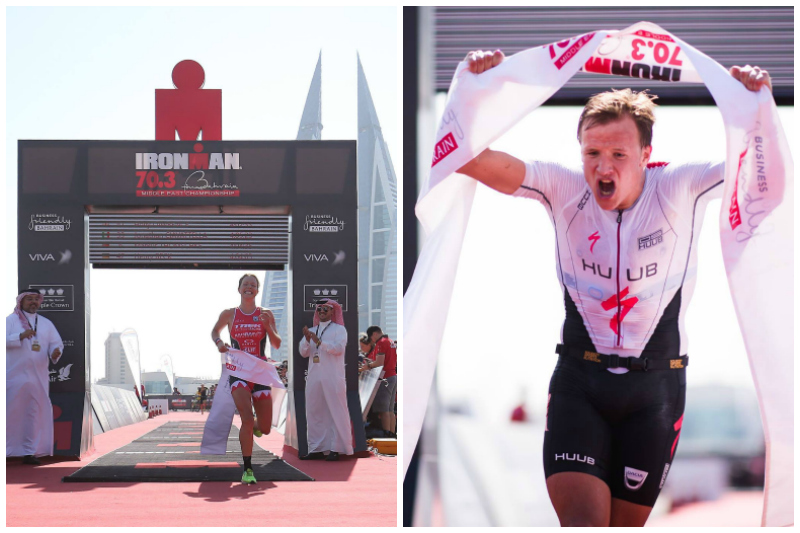 While all eyes were on Switzerland’s Daniela Ryf and Spain’s Javier Gomez and their hunt after the one-million-deal at the IRONMAN 70.3 Middle East Championship Bahrain, a rookie stormed into the center of attention. Norway’s Kristian Blummenfelt crowned a phenomenal ITU-distance season in the final race of the 2017 IRONMAN Europe and Middle East Tour in Bahrain. The 23-year old was the surprise of the day in Bahrain and hammered into the spotlight with a stunning performance. Although Gomez opened up a bigger gap from the swim, the classy Spaniard was caught early on the bike. Defending champion Terenzo Bozzone headed onto the bike course with a disadvantage of 1:15 and turned this deficit around into a 1:15-lead during the first third of the course. The New Zealander definitely knew that the bike would be the key to take it again in Bahrain on a very windy day, and he demonstrated a sensational ride. Two weeks after winning IRONMAN 70.3 Los Cabos, Bozzone managed a sub-2 hour ride to start the run with a lead of 3 minutes. But this was merely enough to stay at the front. Blummenfelt bridged up to the leader thanks to a 10-k-split of 31:52 and nailed a glorious rookie victory.

On the bike, the women’s elite race looked similar compared to the men’s competition. Holly Lawrence led the field out of the water, before the defending champion Daniela Ryf appeared at the front and pushed herself into the lead over the second half of the bike. Ryf was working hard in the wind to crown an outstanding season with a perfect final race. The Swiss IRONMAN world champion of the past three years looked a bit tired over the first kilometers of the run while Lawrence seemed to have much fresher legs. The 2016 IRONMAN 70.3 world champ took the lead from Ryf shortly after passing the 5-kilometer mark, but Lawrence had to fight for the title up to the final meters. Germany’s ITU-distance racer Anne Haug put on the best run split by far and almost caught up with the 27-year old on the finish line. Taking her sixth IRONMAN 70.3 win of the season including two regional championship titles, this victory in Bahrain was a little solace for Lawrence after being forced to pull out of the IRONMAN 70.3 World Championship in Chattanooga.

Ironman Melbourne: A great option for Asian based triathletes
January 22, 2015