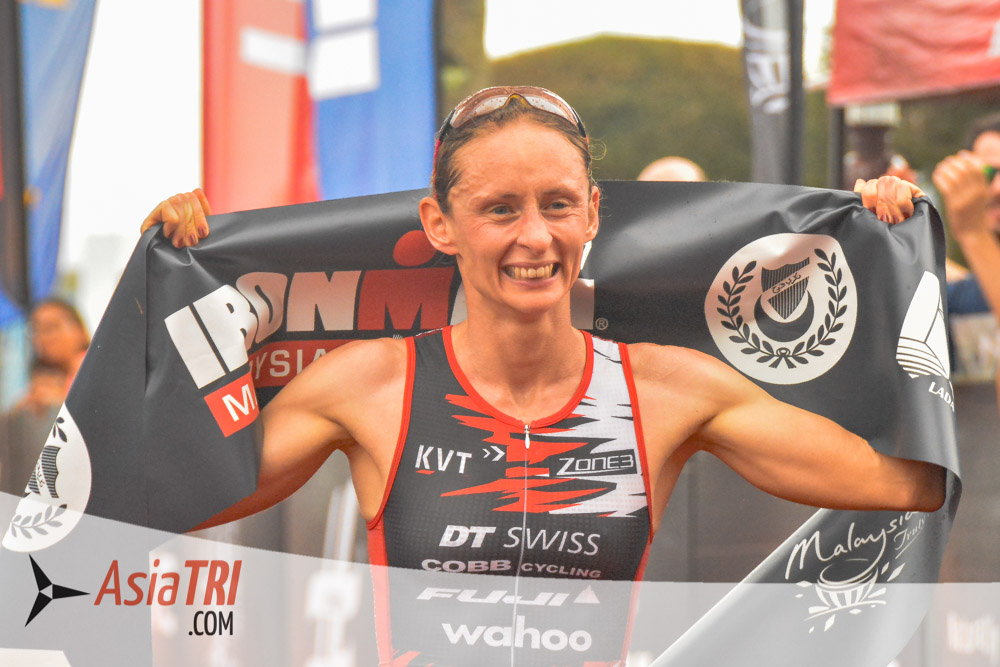 German Diana Riesler extended her remarkable record-setting run with a fourth straight victory at IRONMAN Malaysia on the stunning island of Langkawi.

Riesler was in control, coming out of the two-laps 3.8km swim two minutes down on American Laurel Wassner but she was quickly in control on the bike. She took the lead at the 12km mark and when she arrived at T2 her advantage was over seven minutes.

All that stood between her and history was a solid marathon, which she achieved, winning in 9:19:00 to extend her outstanding record at Langkawi. “I’m very happy that I get to defend my title for the 4th time in a row,” exclaimed Riesler. “I do believe I have a special bond with Langkawi. The people are friendly and nice and I get to see sea gulls every time I’m here. I think that is pretty special. The three disciplines went well for me. I love the rain this time and managed to adapt to it in no time.”

Riesler has won five times over the IRONMAN distance, with her only victory outside of Malaysia coming at Lanzarote in 2015, to go with three podiums.

Fellow German Mareen Hufe, who has established an outstanding record and is always tough late in the year, took over as the chaser when Wassner’s challenge faded. She got to six minutes back late on the run but never threatened the final result, finishing second in 9:27:23.

While Riesler and Hufe are seasoned performers, there was joy for Frenchwoman Manon Genêt who earned her first podium in her rookie year as a professional, finishing third.

Her compatriot Romain Guillaume, like Riesler, was always in command in the men’s race. The BMC-Etixx Team professional was out of the swim with Balazs Csoke (Hungary), Daniil Sapunov (Ukraine) and Christian Kramer (Germany). He pushed hard early to establish a break to have eight minutes at 100km and over 10 minutes buffer off the bike.  He was able to run within himself to finish with a course record with the time of 8:32:53.

An emotional Guillame said, “I’m really glad that I finally won the 2017 IRONMAN Malaysia title. I’ve experienced many setbacks while trying to win the most-coveted title in triathlon. I learned from my past years’ mistakes and made sure that I don’t repeat them again. I was motivated to come and participate again because Langkawi has a special place in my heart. The island is beautiful, and the people are friendly and nice. They were always cheering for me. I dedicate my win to my loved ones who have always been there for through my ups and downs. I promise to come again next year to defend my title. It’s nice to know that I also beat the record for this year.”

It marks his third victory at the distance for Guillaume to go with wins at Mont Tremblant in 2012 and Lanzarote in 2014 along with three IRONMAN 70.3 victories.

See also:  Complete guide (with Video) to Swimming Technique and Training
Follow us