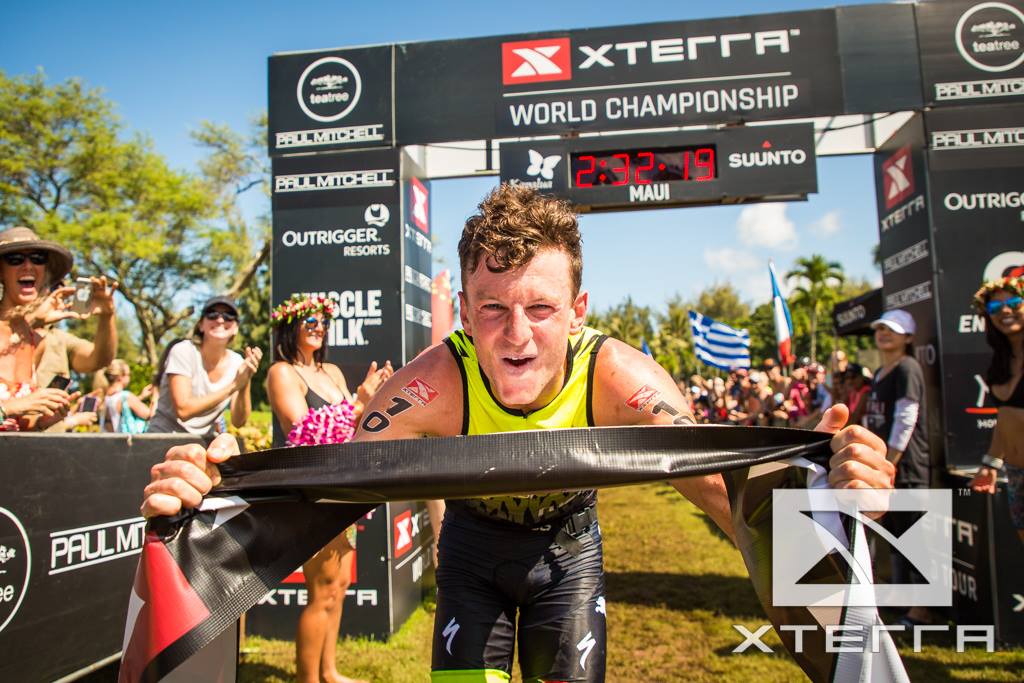 Both Weiss and Duffy each earned $20,000 USD for their respective victories. The total purse was $100,000 and the event was filmed for live viewing as well as international distribution.

More than 800 endurance athletes – including six physically challenged athletes – from 52 countries competed in the event, which started with a one-mile rough water swim at D.T. Fleming Beach, continued with a 20-mile mountain bike ride that traversed the West Maui Mountains, and finished with a tough 6.5-mile trail run in the hot sun.

There was more than 4,000-feet of combined climbing on the technical bike and run courses, which were in excellent condition despite pouring rain on Monday and Tuesday of this week. For Weiss, the day started with a magical swim.

“I didn’t lose any time on the swim which was unbelievable,” said Weiss, who has always been a strong biker and runner, but came out of the water more than two-minutes behind the swim leaders last year. “I don’t know how I did it. I just felt so comfortable in the water. I actually caught a wave at the end and caught up and got past the group. When I stood up on the sand and saw Ben and Flora and the whole group I just thought, what’s going on?”

It’s often been said that you can lose an XTERRA race on the swim but you can’t win it, but Weiss thinks he might have proven the theory wrong.

“One hundred percent I won the race on the swim,” said Weiss, perhaps half in jest. “It’s been letting me down all these years. When I stood up out of the water and saw Mauricio and Ben, I thought, ‘Game on, here we go.’ And I think mentally I won the race there. I was just so, so confident.”

Weiss finished in 2:32:10 and was a humble champion in his first victory after three attempts on the Maui course.

“The Maui gods definitely looked after me this year,” said Weiss at the awards ceremony. “I’m so happy to be here standing on the top of the podium. Well done to the guys standing around me. They brought out the best in me and I had to dig deep a few times and try to get a bit of belief going. Even when I was winning, I didn’t think I deserved to be there, but I’m super proud and super grateful.”

After Weiss surprised himself with a great swim, he took a chance and charged hard from the beginning of the bike course.

“I got on the bike and I knew Ruben and Josiah would be coming,” said Weiss. “And I knew I had to put a gap on Mauricio. He’s proven time and time again that he’s putting the fastest run splits in.”

On the bike course, Ruben Ruzafa, a tremendously skilled mountain biker, caught up to Weiss just before the second water station, but Ruzafa never had more than 30 seconds on his competitor.

“Once Ruben caught me, I thought, ‘Hang in there as long as you can,’” said Weiss. “I made a little mistake on the last bit of single track and Ruben got away.”

On the mountain bike ride, Weiss and Ruzafa swapped the first and second spots. Francisco “Paco” Serrano, who won ITU Cross Tri Worlds a few months ago, held tight to third place during the bike.

Weiss caught up to Ruzafa about one-mile into the run and put a charge into it, ultimately finishing down the chute with his arms outstretched, sharing high fives with the crowd.

Mauricio Mendez, the 2016 XTERRA World Champ, was the eventual runner-up. He was expected to be racing from the front, but he was in fourth place off the bike. He then posted the fastest run split, covering the 6.5-mile course in 39:49 to Weiss’ 41:40 and Ruzafa’s 43:41.

“Today was a really tough race,” said Mendez, who finished the course in 2:33:24. “I was fighting the whole time in the swim. On the bike I tried to do my own race but I was struggling. On the run I knew I had a chance. When I caught Paco, I thought, ‘This is it, I got third place.’ Then when I saw Ruben, I thought, ‘I can do this. I need to put my head down and see what happens.’”

Ruzafa had the fastest bike split and was the first rider into T2 here in Kapalua for the fifth straight year, but got caught by Weiss early on the run and got reeled in by Mendez just before the last stretch of sand before the finish and ended up in 3rd place.

On Thursday, Serrano had a crash on his bike and his shifter got loose, effectively rendering his bike a single speed today on the course.

“I had no shifting on the downhills, but I was feeling good on the run and I gave my best,” said Serrano. “I think Maui wants to test me through adversity. I’m not going to give up. Mauricio got by me on the last uphill by the beach. Hopefully I will be back next year.”

Josiah Middaugh was the top American finisher in Maui for the 10th time and seventh year in a row, and finished eighth.

“I was three minutes back after the swim and I need to be around two minutes back to catch up on the bike,” said Middaugh. “It meant I had to ride by myself for the entire race and never battled once with that top group of guys. So, I worked my way into the field into the top ten, but I felt like I was ten percent off in terms of how I was feeling.”

Right at the start, Midduagh was hit by a wave. “I looked up to sight just as a wave crested and it tumbled me backwards so I was riding the wave from the wrong direction right at the start. All of a sudden, I was back with a bunch of pink caps, which is never a good sign for me. Unless it was Flora’s cap, but unfortunately, it was not.”

Cedric Fleureton, who unretired from triathlon to reignite his triathlon career, returned to the sport in fine form and finished fifth. Today was all about Flora Duffy. She led the swim, the bike, and the run for the women by a remarkable lead. By mile 15 on the bike, Duffy had an almost six-minute lead on runner up Barbara Riveros from Chile.

“I did my first XTERRA World Championship in 2013, and I can vividly remember almost falling over running on that beach down there,” said Duffy. “So, to be here today after winning four in a row is pretty unbelievable and pretty crazy to think about where I started. It’s a very special day for me, and what made it even cooler was that Bradley Weiss – Bad Brad I like to call him – won his first world title. We’ve done a lot of training together over the years. He helped me in my final prep to Rotterdam and I would like to think I helped him today.”

The 2017 XTERRA Chile Champion, Barbara Riveros was in second place for most of the race after a solid swim. She finished in 2:56:11, about eight minutes behind Duffy. Laura Philipp was third in 2:57:24.

“On the bike, Flora was on another level, we all know that,” said Riveros, a three-time Olympian, who missed the last two years at Maui because of injury. “I’m very happy to be at the finish in one piece and I’m happy to be back. I definitely need to spend more time on the mountain bike to get to the next level.”

As for Philipp, who won XTERRA France earlier this year in her first off-road race, she sat in third most all day.

“It was tough from the beginning, but I was surprised I was fourth out of the water which was good for me,” said Philipp. “I’ll definitely be back. The race was beautiful. I didn’t have to worry about traffic. I was 100 percent concentrated.”

“The swim was crazy, but I lived,” she laughed.  “I was happy when I started the bike and I loved the course. It’s really a power course, but I didn’t drink enough so my legs cramped.”

The untold story of the day comes from the Scottish Rocket Lesley Paterson, who was injured shortly after winning the XTERRA Pan America Championship in September and had been struggling with a stress fracture in her pelvis for the past month.

“I’ve only done one minute of run training in the last four weeks, and that was last night,” Paterson finally admitted. “It was a challenge to get here but I wanted to come because I love the XTERRA family and I knew if I didn’t come here I wouldn’t experience it. And you know, I enjoyed it. I enjoyed being out here and seeing everyone and suffering with everyone. I really enjoyed it.”

Suzie Snyder, who finished sixth and top American in Maui for the second straight year, can relate. The XTERRA Pan Am Tour champ has been dealing with asthma and heart rate issues for the past few months.

“I’m pretty relieved I can be done and recover,” said Snyder. “I’m disappointed to be off the podium. It was a strong field, but when you don’t have the preparation, you can’t expect to be on the podium.”