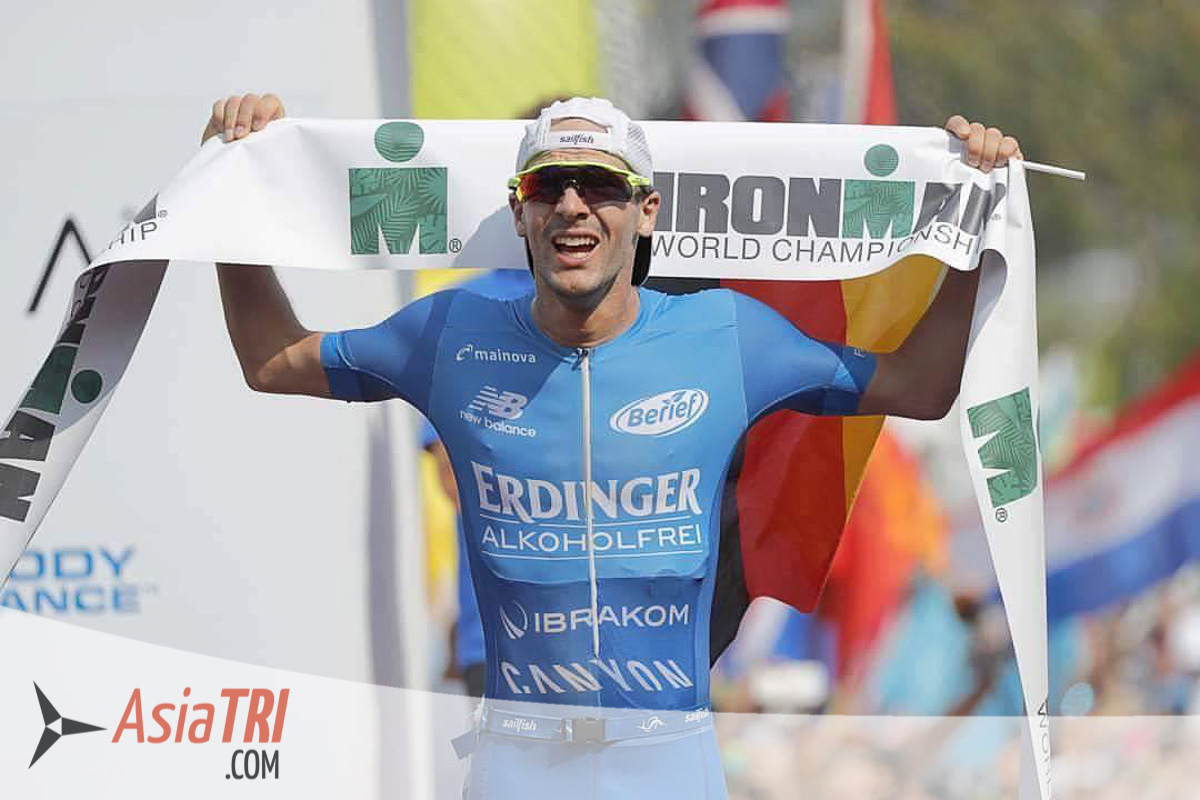 Patrick Lange of Germany plowed through the field in the run course, proving last year’s run course record and 3rd place podium was no fluke, winning the Ironman World Championship for the first time in record-breaking fashion.  Lange finished in 8:01:40, eclipsing Craig Alexander’s 2011 record of 8:03:56.

Aussie and uber swimmer Josh Amberger had vowed during race week that he will gonna push the pace on the swim, and so he did.  By the swim turnaround, Amberger already establish a 50 second lead in the chase group that included the contenders, including defending champion Jon Frodeno.  Amberger who won the Ironman Asia-Pacific Championship in Cairns last June and a rookie in Kona, came out of the water first in  47:09, with a 1:19 lead over Frodeno and huge group in the chase pack.   Amberger’s time was fast but did not touch the 46:41 swim record of  Lars Jorgensen. Contenders Lionel Sanders (CAN) and Sebastien Kienle (GER)  came out of the water in 40th and 41st position.  They were more than 6 minutes and 30 seconds behind the leader at that point.

Amberger was able to ride solo till the 30 mile mark when the chas egroup had caought up with him and only seconds back.  The lead group is now consisted of Tim Reed (AUS), Igor Amorelli (BRA), Frommhols (GER) and Frodeno.   A chase group that include four uber-bikers Boris Stein (GER), Sanders, Kienle and Cameron Wurf.  They were only 3 minutes behind the lead at that 30 mile mark.

And by the Hawi turn-around, Sanders had taken the lead with Kienle and Wurf just close behind. But by mile 76, former Pro Cyclist Wurf has taken the lead together with Kienle, distancing themselves a good 48 seconds over Sanders and Frodeno.  The intention is clear, to have a gap as wide as possible to the fast runners. Sanders would immediately work out off T2, and would grab the lead over Wurf in Mile 2.   The Canadian ran the first 3 miles in sub-6 minute per mile pace.  The first surprise of the day came when Frodeno, who went into T2 at 4th place and only 2:16 back, was walking on mile 3, apparently due to a harmstring injury.

While Sanders and Kienle were moving at pace of 6:12-6:20 minutes per mile pace, last year’s 3rd placer and record holder for the best Kona run split, Patrick Lange is churning out 6 minute miles and has gone from 10th out of T2 to 4th in the 12 mile mark.  By the halfway mark of the marathon, Lange was at 3rd place and 6 minutes and 28 seconds back from the lead.

Approaching the 19th mile, the hard-charging Lange has taken 2nd place from Kienle, just 2:24 down from the struggling Sanders.   The pass would be made in the 23.4 mile mark of the race.   Sanders made a valiant attempt to counter but the pace and effortless form of the German was just too much to overcome.

See also:  CHALLENGESALOU 2020 will feature the best triathletes in the world