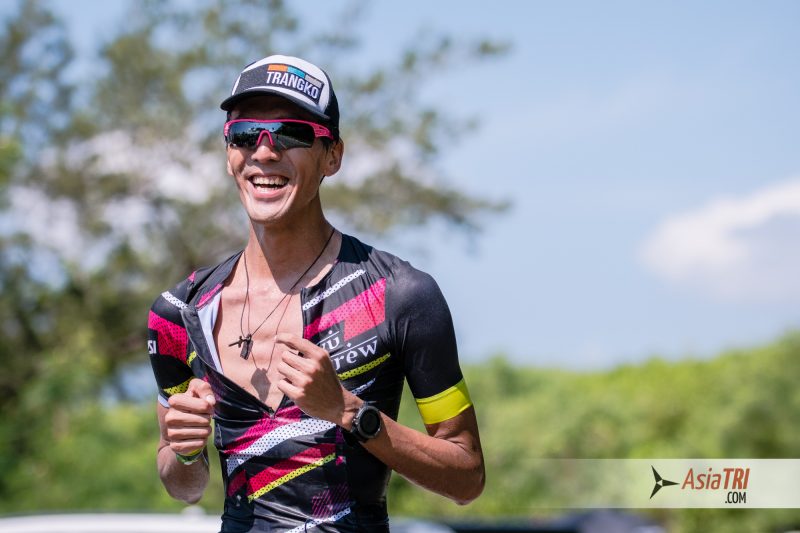 With the popularity of triathlon in the Philippines at a high and still growing, the fascination with Kona and the Ironman World Championships tags along with it.   Chasing Kona and gaining an entry however to the Big Dance in October remains elusive to most Ironman triathlon enthusiasts.  The biggest Filipino contingent remains the 2011 delegation when 11 Filipinos gained entry to Kona.  This year, the Philippines will be represented by six Filipinos, namely Jong Sajulga, Berns Tan, Ani de Leon-Brown, Andy Aguila, Maria Hodges and Andy Aguila.

One of those chasing a spot is 38-year old Sales and IT specialist Retzel Orquiza.   AsiaTRI had a chance to talk to Retzel, who is in his last prep for his Asian Ironman tour.  He finished Ironman Gurye in September and just finished Ironman Taiwan this first week of October.  Retzel will be in Ironman Malaysia this November:

AsiaTRI: Can you tell us about your background? How did you start in the sport?

Retzel: I was never a sporty guy back then. I’m a couch potato and a basketball fan. I’m always glued to the TV and computer. Then I started doing hiking in college. It entailed some kind of fitness regimen to keep up with my climbing buddies. I started doing triathlons back in 2004 when I was able to watch the Ironman World Championship back in 2000. I was fascinated about the event and I challenged myself that I would do it someday.

AsiaTRI: You are particularly known in the Philippine Triathlon Community as one of the popular and “hardcore” endurance enthusiast—combining long distance triathlons with ultra-trail running, can you name us what events you are proudest the most?

Retzel: I wouldn’t consider myself hardcore but only as an avid endurance sport enthusiast. I just love doing multisport events like adventure racing, duathlons, aquathlons and triathlons and endurance events like ultra trail running and long distance multisport events. Since I started with hiking, joining trail running events is a no brainer for me.

Aside from being finishing iron distance triathlons, I proudest about finishing the Hardcore 100 ultra trail running event back in May. Finishing it was on my bucket list. Now, I’m eyeing to get a slot at the Ultra Trail du Mont Blanc.

AsiaTRI:  It is a known fact that you are chasing Kona. Can you tell us more about it…where are you now in your Legacy journey.

See also:  AsiaTRI Interview: A chat with the First Indonesian to Qualify for Kona

Retzel: There’s no hiding it anymore. After my local iron distance race back in 2012, I’ve only done one Ironman event back in 2008. My first Ironman race took its toll on me physically and mentally. I basically burned myself out preparing for it

Since that 2012 race, I was able to rediscover something in me that I could train smarter than my first race. Now I’m on my way to a 9th Ironman having done 2 just a few weeks ago. It is an experiment for me to do consecutive IM races to maximize one big training block for all the IM races for the year. I was able to prove that I could last year by doing 2 Ironman races in 5 weeks with a medium distance in between.

AsiaTRI: In between the races, can you share us your recovery routine.

Retzel:  After an iron distance race, I reward myself a week off of training. Hanging around with friends to regain back some sanity from the hardships of Ironman training. Then switch on again and have that mojo back to have a good race on the next event. It is neither long nor hard. Just keeping myself fit and prepared for the next one. Retzel: My toughest by-far would be both Ironman Taiwan in Penghu. Last year, I anticipated it to be a cold and “easy” race. It was neither. It was hot, humid and windy. It drained every ounce of my being during that race. This year, I was already “prepared” from the year that was but it proved to be tougher again. Hotter, more humidity, and hillier and windier bike course. But we have to roll with the punches and tough it out again.

For my toughest ultra to date, it would be my first crack at a 100 miler ultra trail race back in 2015. Though I started that race with all hints of negativity, I found it really challenging every step of the way. The cutoffs are mighty strict and the terrain is unforgiving. Heat, cold, endless climbs and torturous descents. I finished that race dead last and beyond the cutoff. But I found a renewed strength in myself that I could do it. I did finish it this year to cap off my UTMB qualification.

AsiaTRI: What are your races for the rest of the year?

Retzel: For the remainder of 2017, I’ll be doing the 1st Amphibrun (1.5km trail run-1.5km open water swim-12km trail run) inspired by the Otillo races in Europe and will cap off my season with Ironman Langkawi for  my 9th Ironman towards the Ironman Legacy campaign