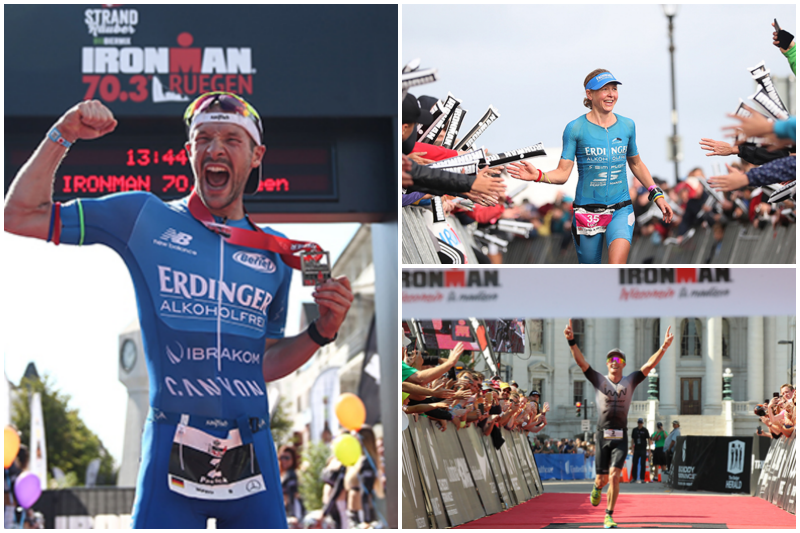 Andrew Starykowicz (USA) played to his strength and stormed to the front of the race early into the bike by upping the tempo significantly on the field. Luke McKenzie (AUS) and TJ Tollakson (USA) were up for the challenge and managed to keep the American reasonably close for much of the ride while the rest of the field fell well off the pace being set out ahead.

Once the men hit the run, McKenzie was in his element as the tenacious Aussie started immediately chewing into Starykowicz’s advantage. Patience was McKenzie’s strength as he managed to reduce his gap to two minutes after completing half of the marathon, after coming out of transition and onto the run nursing an eight-minute deficit. Forging his way into the lead between 14 and 15 miles of the run, McKenzie slowly pulled away from the field by laying down a solid sub-2:50 marathon to take the win by an 11-minute winning margin over Tollakson in the men’s only race in Madison, while notching his ninth IRONMAN win (and the first on North American soil) of his career.

IRONMAN Wales is famous for tough conditions. Just like the IRONMAN Lanzarote course, the course in Wales and the weather conditions always make this race a challenging one. At the seventh edition of the outstanding event, the water temperature was not really high when athletes embarked onto their Wales journey in the morning.

The race became a hot battle early on, however, due to a packed lead group in men’s race. British Harry Wiltshire set the pace as expected while Australia’s former cyclist Cameron Wurf proved his strength on the hard bike course shortly after. The rain was on and off, and the longer the race went on, the stronger the wind became. Wurf managed the only sub-5 bike ride of the day and laid the foundation for his first IRONMAN success on the demanding course. He came off the bike with a huge lead in front of the strong biker Philip Graves and Christian Kramer. Although it looked like Kramer could make a decisive pass on the marathon thanks to his running talent, Wurf kept his advantage solid and stood in front all day long. Kramer downsized Wurf’s lead, but he pushed a bit too hard and had to suffer on the final kilometers. Graves eventually passed Kramer for silver and became a happy back-to-back runner-up in Tenby.

In the women’s race, a British day was crowned by an extremely popular champion. Four years after taking her first win in Wales, Lucy Gossage dominated the race in great fashion. As expected, she was far behind the strong swimmer Kate Comber in the water, but there was no other pro woman to control the race on the bike and run later on than Gossage. She moved to the front after 40 kilometers and didn’t worry at any point about the windy conditions or any opponents. Gossage stormed through the course and nailed another demonstrating victory of her career. Different than in the men’s race, the women’s podium was completely British.

Busselton champions Dan Wilson and Katey Gibb made it two-in-a-row when they both won IRONMAN 70.3 Sunshine Coast at Mooloolaba.

With all eyes on the IRONMAN 70.3 World Championship, both Wilson and Gibb sailed away on the bike to establish their winning break on the same course set up for last year’s 2016 IRONMAN 70.3 championship on the Sunshine Coast.

Wilson, the former ITU performer and lover of heavy metal music, strummed the right tune to be out of the water in the lead with compatriots Lindsey Lawry and Casey Munro in 22:32. Both Munro and Wilson managed the fastest bike times of 2:11 to take a telling buffer on to the run.

Wilson opened a minute gap at 5km on the run and he cruised home in 3:52:36, while Tim van Berkel and Sam Betten (1:12 and1:13 respectively) rushed on the run to fill the minors.

Gibb trailed Kiwi Rebecca Clarke by 1:26 out of the water but had the lead by a minute at 20km, and extended to 4 minutes off the bike. Her 1:29 run was more than enough to win in 4:29:03, while New Zealand’s Hannah Wells had a best 1:26 to run up to second ahead of Michelle Gailey.

The IRONMAN 70.3 Ruegen was a great opportunity to test the fitness for the IRONMAN World Championship. It was not a surprise that Germany’s Patrick Lange and Anja Beranek crossed the finish line with huge smiles. Obviously, the two are in great shape for Kona.

Lange just dominated men’s race: he was at the front in the water and embarked on a hard ride with his compatriot Nils Frommhold. Getting onto the run course, he dropped an early-suffering Frommhold and all other opponents by far. Although Lange slowed down a bit on the final kilometers to enjoy the sunny atmosphere, it’s clear he’s ready for Kona. After a season of ups and downs with injuries, it looks like the Kona run record holder is prepared for a big showdown in Hawaii.

Beranek thinks about Kona in an optimistic way, too. She celebrated not only a start-to-finish-victory in Binz, but she demonstrated as well that she has improved her the run in the past months. The 32-year-old nailed the best swim and bike, and she maintained her speed on the final half marathon. Daniela Saemmler tried hard to catch up with 2016’s Kona fourth-place finisher, but she had no chance to do get closer. Beranek now has a clear goal for the big race on the Big Island: She wants to improve her 2016 ranking.