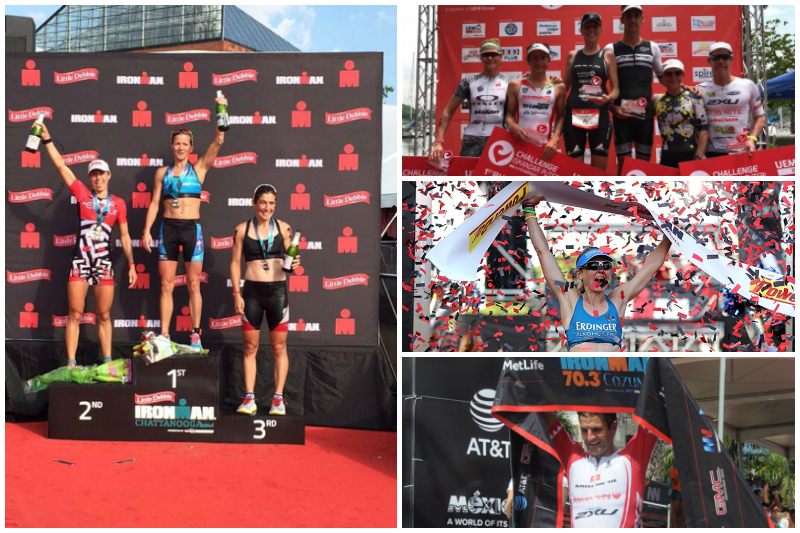 Leading the field from the first discipline of the 1.9km swim at the Puteri Harbour, Robins withstood an early morning downpour to complete the 90km cycling discipline, before racing past the finish line at the end of the 21km run in a time of 3 hours, 57 minutes and 47 seconds.

“It was quite challenging on the bike, as the road was quite slippery due to rain,” said Robins.

“Still, I managed to hang on to the lead and I must commend the route for cycling and running, as it was far better than last year.

“It was a tough race nonetheless, and I am glad to have won it and the experience was truly fantastic,” he said.

Finishing second was Fredrik Croneborg of Sweden in a time of 3:58:29. Cameron Brown of New Zealand was third in 4:00:48.

In the women’s category, German Beate Goertz emerged as champion, with a time of 4 hours, 29 minutes and 32 seconds.

“I knew I had to go hard on the bike. And the bike route is to my liking, as it is flat. There were some tricky areas with a lot of bumps. But overall, this is a good race and well organised,” said Beate.

In second spot was Anna Eberhardt of Hungary at 4:32:12, while New Zealand’s Kathryn Haesner came in third at 4:37:04

Cervia hosted a big debut day at the inaugural edition of IRONMAN Italy Emilia-Romagna. The first IRONMAN on Italian soil turned out to be a great adventure for more than 2,500 registered athletes. In the pro ranks, Germany’s Andreas Dreitz nailed a fantastic IRONMAN rookie race. The 28-year-old multiple IRONMAN 70.3 champion impressed both the male pro field and the crowd on the bike when he flew over the almost flat, but very windy course. He moved onto the 184 kilometer long course in 8th place after a solid swim, and notched a 4-minute lead after only 60 kilometers. He started the run with an advantage of about 14 minutes and kept going in a high-pace mode. Although he had some minor issues of cramps after the bike, Dreitz proved himself ready for the IRONMAN-distance on a world class level. Another big name on the German squad said goodbye to professional racing in Cervia: Timo Bracht, who crossed the finish line in 5th.

See also:  Caroline Steffen skips Kona to focus on the Ironman 70.3 Distance in 2016

Lucy Gossage has always been extremely impressive when she races, especially on British ground in the past few years. This time, it was a different place, but again an unbelievable performance for the 37-year-old Brit. For the first time in her career she tried to compete in two IRONMAN races at a high level in less than two weeks. Only 13 days after recording a clear second win at IRONMAN Wales she managed an almost perfect race at the Adriatic coast of Italy, too. Gossage belonged to the leading swim group and then started battling it out on the bike course with Belgium’s Tine Decker. The lead was going back and forth until Gossage sailed away in the strong head winds on the final 30 kilometers of the bike. From start to finish of the marathon, the leader always had a lead of about five minutes. Especially over the last 5 kilometers of a tough race, Gossage showed her outstanding abilities and pushed the pace once more. When she came through the magic carpet, her huge smile didn’t let the spectators believe that this was her second IRONMAN victory in such a short time.

Liz Lyles (USA) owned the Chattanooga race course this weekend. The American took the lead early into the bike and hit the dismount line with a six-minute advantage on her closest rival.  Like  she hadn’t inflicted enough damage over the 112 miles on the bike, she proceeded to bury the field with her blistering run from the opening mile. At 13 miles, Lyles had over a 16-minute buffer to second with the remainder of the field left to face well over 20-minute deficits, to eventually take the title by a 23:14 winning margin.

It was the Matt Chrabot (USA) show for the swim and bike legs of the race in Mexico. The American had to be on his toes with Paul Mathews (AUS) and Terenzo Bozzone (NZL) nipping at his heels as the lead trio headed into T2 within seconds of each other.

Once on the run, Chrabot couldn’t bury Bozzone who floated 20 to 40 seconds behind the leader for much of the first half of the run. At 15 km’s, the Bozzone move to the lead while Chrabot could onlywatched the Kiwi pull away for the win in Mexico.

In the women’s race, Leanda Cave (GBR) looked to have the race in control deep into the run. The IRONMAN and IRONMAN 70.3 world champion lead from the start of the swim until 14 km’s of the run when Stephanie Roy (CAN) passed the falter leader. Roy would close off the final 7 km’s strong to notch her second IRONMAN 70.3 race win of the season in a finishing time of 4:18:47.

Jesse Thomas (USA) used the second fastest bike and race-best run split on the day to claim the victory in Georgia. Coming off the bike with a 43-second deficit to contend with set up the American beautifully if he could pull off a run he is capable of. Thomas hunted down early run leader Matt Russell (USA) in the open mile of the run and manage to make his pass stick shortly after two miles were completed. From there, Thomas had to fend off a hard charging Andy Potts (USA) late in the race to claim the win in Augusta.

Former ITU standout Sarah True (USA) is making the transition to distance racing with ease this year. The two-time Olympian, once again demonstrated her strengths that are proving fruitful at the half distance as was evident in her her wire-to-wire win in Augusta on the strength of the race best swim and run splits on the day.