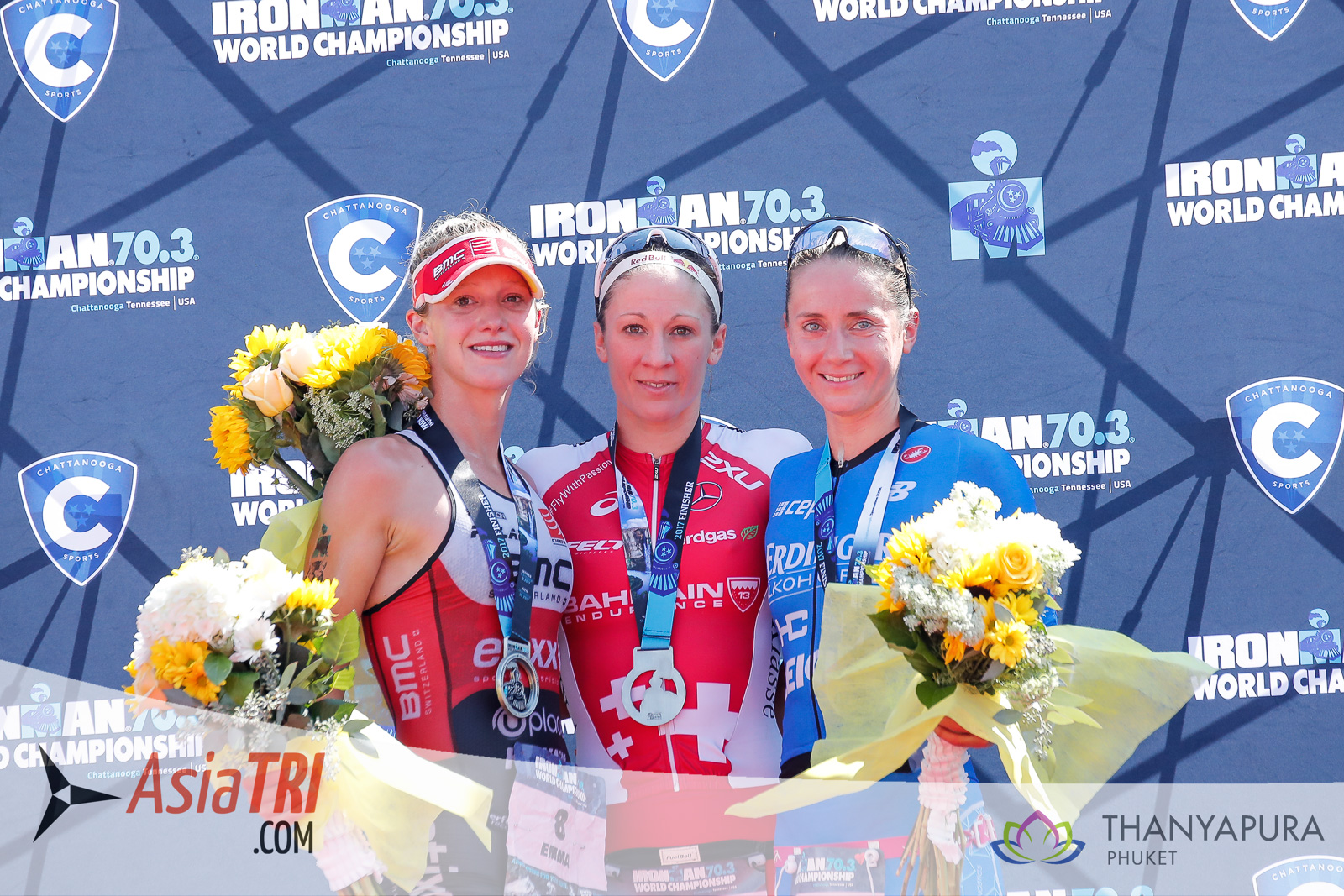 Switzerland’s triathlon powerhouse showed her strength over a tough course against the world’s best women.

It was a historic day at the Icy Hot IRONMAN 70.3 World Championship with a women’s-only race held on day one of a weekend festival. The field featured 2016 champion Holly Lawrence, two-time champions Daniela Ryf and Melissa Hauschildt, and numerous other IRONMAN 70.3 stars and short-course speedsters.
The women lined up at 7:30 am on a pontoon overlooking the glass-calm Tennessee River, on a day that couldn’t have featured better conditions. After the gun went off, the USA’s Lauren Brandon charged to the front, with Haley Chura and Sarah True pulling their weight in the up current portion of the 1.2-mile swim. The three held their positions as the downstream current ushered them back into T1, with Brandon clocking the fastest swim of the day (25:23). Holly Lawrence’s surprising 2:17 minute deficit out of the swim was the first sign that things weren’t quite right for the British defending champion.

Two-time IRONMAN 70.3 world champion and reigning IRONMAN world champion Daniela Ryf wasted no time putting her stamp on the race early on. By five miles in she had charged to the front of the bike course, and by the top of the grueling Lookout Mountain climb, it was clear she’d never have to look back. Fans watched intently as Lawrence began to work hard on shrinking her deficit out of the swim, but at mile 25, pulled out of the race.

From that moment on, it was clear the day would go on to become the Ryf show, as so many of the races she enters do. By the end of the hilly, technical bike course, Ryf had put almost 9 minutes into her next closest competitor—Germany’s Laura Philipp, who was also demonstrating her cycling strength. Into T2 well ahead of a chase pack of 10, Ryf took off on the run, ready to back up her race-best bike split of 2:20:21 with a strong half marathon that would lead her to her third IRONMAN 70.3 world championship victory. Behind her, a pack of strong runners entered T2 within 30 seconds of each other, ready to put the pressure on, but facing the reality—and the return—of Ryf’s dominant style that would lead her to become the first woman to earn this title three times. On her way to yet another world championship title, Daniela Ryf swam a 26:26, biked a 2:20:21, and put in a solid 1:22:06 run for a finishing time of 4:09:47.

“It was one of these races you wish to have at a world championship,” Ryf said. “It was not perfect—I lost my nutrition at 5k on the bike and I wasn’t sure I was going to make it through the bike. I grabbed everything I could at the aid stations.”

Once onto the run, British middle-distance run specialist Emma Pallant was keen to establish herself as one to watch in triathlon. She stormed into second place at mile 1, showcasing a flawless technique that would propel her to a race-best run split (1:19:48).

Despite her incredible run, in the end, 13.1 miles wasn’t enough time to put a dent in the seasoned leader, and Pallant ended up crossing the finish line 6:30 minutes behind the champion. After the race she remarked at how happy she was with her performance: “After a big block of training, if you don’t execute, there’s no point. This has given me confidence, and shown that yes, it makes a difference.”

Images from the Nations Parade at Ironman 70.3 World Championships in Chattanooga