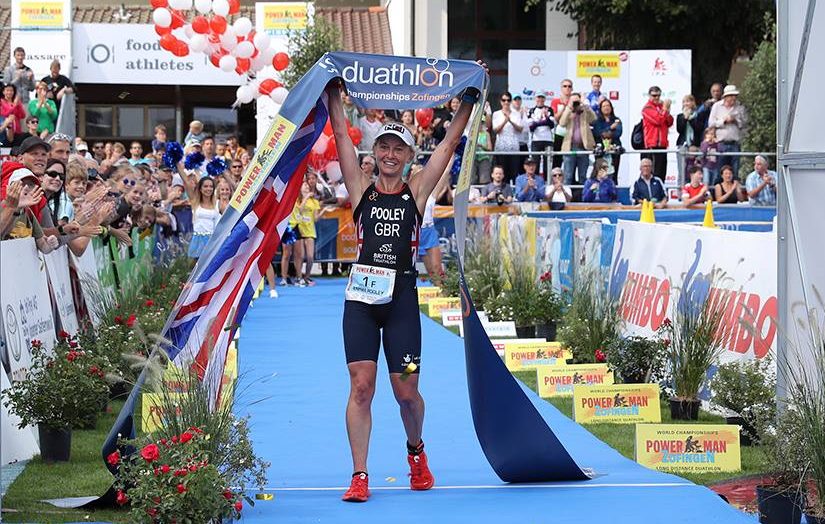 British Emma Pooley and Russian Maxim Kuxmin claimed the titles at the 2017 Powerman Duathlon Long Distance World Championships, hosted this Sunday in Zofingen. The Brit set a fabulous new record with her fourth straight world champion title, while Kuzmin surprised all the favourites for the race to claim his first victory in the distance.

After a tremendous race, Pooley, the British duathlete living and training now in Zurich, crossed the finish line stopping the clock on 7h21’04’‘, 27 minutes ahead of Miriam Van Reijen (NL), and closely followed by Katrin Esefeld (GER). Best Swiss women, in fourth place, was Nina Zoller.

The Brit started the first leg of the run proving that she was the one to beat, only followed by French Sabrina Montmartreau. But it was on the bike where she showed her class, breaking away from the rest of the group, increasing the margin on every kilometer, just to finish the 150 km ride with more than 16 minutes over Montmartreau. On the last leg of the race, the 30km run, she kept on with the frantic rhythm, while the French women lost her initial strength and was chased first by Van Reijen, then by Esefeld and finally by Zoller, to finish on the fifth position.

For Pooley this is her fourth consecutive World Title in the distance, while Van Reijen improved her last year’s fifth place.

In the men’s race, Kuzmin’s win, last year’s fifth, was a surprise for a lot of people. He finished 85 seconds in front of last year’s winner Seppe Odeyn (BEL). Third place, as last year, went to Søren Bystrup (DEN).

“I simply cannot believe it. I was going to fight and see if I could get a podium place, but gold…”, said an extremely excited Kuzmin after the race. “I reached the leading pack after 30k of cycling. After 70k I decided to attack. I pushed during the hill and realised I had broken the pack, and there was only a French guy and myself in front.  I kept on pushing hard to increase the gap in the second lap of the run and… It is just amazing. In 2016 it was the first time that I tried Long Distance duathlon. I am a winter triathlete who took the decision to change disciplines and go to duathlon. I was 5th here last year and in 2017 was focussed on endurance plus speed training sessions. So that is a result. A wonderful result!”, he explained.