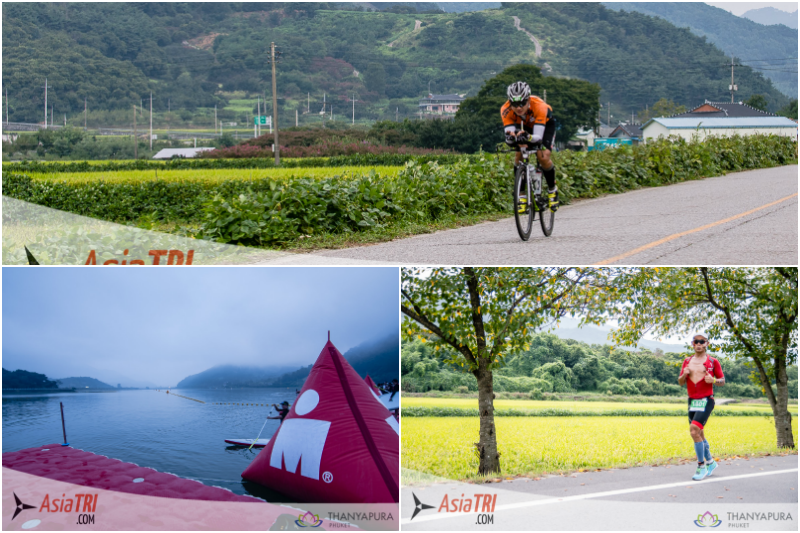 Last year, South Korea has one Ironman-branded race in its calendar, and it is the Ironman 70.3 Gurye.   Being host to the 70.3 race the past three years, the same organizing group levelled it up and held the inaugural full distance Ironman Gurye last Sunday (September 10, 2017).   Being heavily government- subsidized, the county of Gurye pulled no stops in putting up a superb triathlon event.

A quick look of the start list would see that triathlon is also popular in Korea.  Nine hundred of the participants came from the host country.   China came in second with around 160 athletes, and its quick to note that the bevy of new Ironman races in China is having its rippling effect.   The Philippines has long been a hotbed of triathlon scene in Southeast Asia, and it is no surprise that it sent a delegation of 114 athletes.   Thailand is now a force too, and it was represented by 100 athletes.  Important to note that this race is giving out 30 slots to the 2018 Kona Ironman World Championships.  A lot of Asians got a chance to grab 2018 Kona slots as this race coincided with the Ironman 70.3 Worlds in Chattanooga where the strong age-groupers in this region (including Aussies) raced on the weekend.

The county of Gurye is in the province of Jeollanam-do, South Korea. Gurye is a small, picturesque farming town situated between Jirisan and the Seomjin River. Gurye is the sole designated special tourism and leisure zone in all of Jeollanam-do.

Gurye County is a popular hiking destination during the spring and autumn seasons. The county’s beautiful landscapes are showcased during its yearly festivals such as Sansuyu Flower Festival, the Royal Azalea Festival and the Piagol Valley Maple Festival. Gurye is also home to Korea’s first national state park, which houses some of Korea’s most important temples such as Hwaeomsa, Cheoneunsa, and Yeongoksa.

How to Get There

To get there, one can fly to Incheon international Airport, the largest airport in South Korea.  From Incheon, there are options on how to get to Gurye, which is a 4 hour drive down south.   It can be accessed via bus, train or a rented vehicle.  As a convenient option to registrants, the organizers provided a shuttle bus for an affordable fee.  This option must be pre-registered.   The bikes were loaded to a cargo vehicle separately.  The whole trip though lasted for 5 hours as there were two short stops for food and toilet breaks.

The swim course is the lake in Jirisan Park, South Korea’s first named national park.  It is a simple inverted-V swim course, wherein you swim on the outer lines first, and go inside the swim lines for the 2nd loop.   The course is properly marked with a full swim lines and marker bouys.   As it is a lake, there are no currents to mind.  The only minor issue was visibility as the lake is murky, and on the race day itself, fog was heavily present. It was a pontoon start, so athletes rolled in the start line in groups of five for every 5 seconds. The swim temperature was in the high teens to low 20’s so it was definitely a wetsuit swim.  Days before the race, it was announced that wetsuit was optional, as they measured the water temperature between 23-24 degrees celsius.   From the pontoon, athletes run to the transition situated only 75 meters apart.

The 180km bike course took the participants on a scenic journey throughout the Gurye county.  After heading out from the Transition athletes will immediately get on the expressway enjoying the smooth and fast road surface before reaching the first turnaround point in Sandong. It is in Sandong where the athletes will experience the first long climb.  Though not entirely difficult, it will be the first test that will keep the heart rate in check.   After the u-turn, get free speed with the downhill portion.  Tt is important to note to mind some uneven portions from pothole covers. Then participants will pass through the town area to reach the loop segment of the course which will have them complete 3 laps before heading back to Transition. The first u-turn of the 3 lap segment also represented another climb.  The climb was high in gradient but long enough to burn your legs.   Talking to athletes, the course was littered with false flats.   The general feeling was it was still a flat course, and time trial bike is the definitely weapon of choice going in.  Athletes passed through the Jirisan mountain range, rice fields and the Seomjingang River.  It is also great for athletes to ride in tree-lined roads, which helped somewhat in controlling the temperature.

The big surprise is the last stretch of the course leading up to Transition.  It is a 20km highway straight as a ruler’s edge.  With no shade and straight as it is, it was the last mental test in the bike course.   The athletes felt that it will never end and the heat from the afternoon definitely added to the test.

Overall, the bike course featured one of the best road conditions in the Asian triathlon scene.  The temperature was just right, and the air had just the right cooling effect on the athletes.  Not too cold to let you wear thermal clothing, but just right to counter the effect of the blazing sun. The run course is mostly flat with minimum elevation. After completing a single lap of the Jirisan Lake participants will head down to the Natural Dream Park where the Finish Line is also situated. Runners will pass race event central where most of the supporters and spectators are before they make their way onto 6.4 km 3 loop portion.  Important to note that athletes upon completing each lap will have a glimpse of the Finish Line chute.  Aid stations were well situated and complete with fruits, cookies, cola, electrolyte drinks, water and sponges.