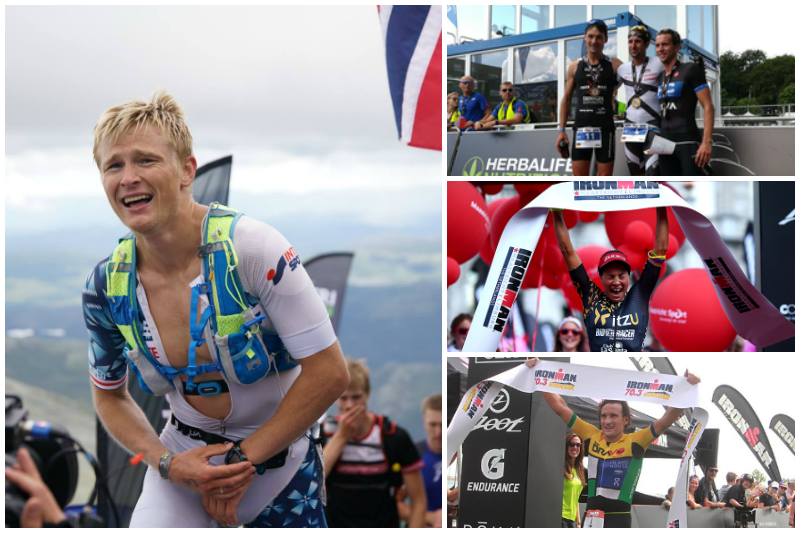 After 226 kilometres of arduous swimming, cycling and running, Isklar Norseman Xtreme Triathlon 2017 has come to an end. Both Lars Christian Vold and Anne Nevin had epic wins.

246 anxious athletes jump from the bow of the ferry into the dark and desolate 05.00 waters. At the sound of the horn, they take off, racing 3.8km back to shore. Lars Christian took an early lead, setting an ambitious pace and earning the right to be the first one to cycle out of transition one. Eventually the athletes found their footing on dry land and took to the grueling first hill up to Vøringsfossen in chase.

Atop Hardangervidda, weather can be unpredictable. This year was no exception. With sudden showers and breaks in the clouds, the athletes kept their pace 180km through four demanding climbs and break-neck descents. Throughout, Lars Christian held his lead, steadily maintaining his roughly 7 – 10 minute gap. The women fought hard, overtaking one another in a scramble to transition 2. Meredith Hill claimed first dibs on dry clothes along with Lars Christian before the marathon trudge toward the finish at Gaustatoppen.

42.2 kilometers and 1700 vertical meters of running is all that stood between the athletes and the right to claim their finisher shirts for Norseman 2017. Lars Christian kept his pace up into the daunting ‘Zombie Hill’, a winding road from Rjukan valley to the base of Gaustatoppen. Surrounded by an army of fans, he fended off the pains of the morning’s trials to take his first steps on the rocky terrain.

Anne was followed by Meredith Hill (AUS) and Kristin Lie (NOR)

Lars was followed by Allan Hovda (NOR) and Jordan Rapp (US)

With many pro athletes living in or using the Boulder area as a training base, reigning champions of this race can claim bragging rights for the following 12 months. Tim Don (GBR) and Jeanni Seymour (ZAF) will be the “toast of the town” as the pair continued their winning ways in 2017 at this years edition of IRONMAN 70.3 Boulder. Both started the run trailing the leaders and stormed their way into the lead with solid runs and the eventual win. Their performances in Colorado bode well for Don and Seymour in five weeks at the IRONMAN 70.3 World Championship in Chattanooga.

Once more in his career, Boris Stein put his cards on the table on the bike. In both the men’s and women’s race, the bike splits were the key to success at IRONMAN 70.3 Gdynia. Being 2:30 behind the lead after the swim, the gap was not too big for Germany’s strong biker and runner Stein. He hammered from bike start to finish and started into the run already in first place. Although the two-time IRONMAN champion had a solid run, his compatriot Christopher Hettich almost caught up with him on the final kilometers thanks to the best running performance of the day.

Lisa Huetthaler managed her way to the front as always on the bike. The Austrian was only a minute behind in the water and moved into the lead early after. Huetthaler seemed to be off and away when she started the run, but Corinne Abraham downsized her advantage with a quick half marathon to take second place.

Johannes Moldan (DEU) put in a hard effort on the bike and was rewarded with six minute advantage on the competition as the German heading out transition. The defending champion,  the ageless Viktor Zyemtsev (UKR), 44, was off the bike in third and facing a deficit of over eight minutes. Moldan, who faced a long challenge of recovering from glandular fever this year, hit the run uncertain of his running legs. Zyemtsev put in a brilliant run but came up two minutes short, as Moldan crossed the finish line for the win.

Helle Fredericksen (DEN) put on a race clinic in Estonia on the weekend. The Danish star exited the water with a 4:12 advantage, and that would be as close to the leader as the women’s field would get for the remainder of the race. Fredericksen dismounted her bike in fifth place overall and went on to claim the title by a gap of over 13 minutes on her closest rival.

Michael Weiss turned on the turbo on the final part of IRONMAN Maastricht in the Netherlands. As always, the Austrian was behind the leaders in the water, before the 36-year old hit the gas on the bike and run. When he came off the bike, he was 5 minutes behind long-term leader Michael van Cleven from Belgium and found himself being a “Pacman” on the run. While the audience was expecting a win by one of the strong Dutch or Belgium athletes, Weiss nailed a sensational marathon to take the fourth IRONMAN victory of his career. He pushed himself to catch up with van Cleven and to hold on to first place until he crossed the pumping finish line. “That was hurting a lot today,” he said with a huge smile.

Last year’s runner-up Saleta Castro was at the front of the race almost all day long. British Kate Comber set the pace in the water in front of her Spanish shadow, before Castro moved to the front on the bike and kept first place for the rest of the day. Canada’s Brooke Brown was close to the 29-year-old when she reached T2, but this was the last time to touch women’s leader during that race. Castro celebrated the first IRONMAN victory of her career.