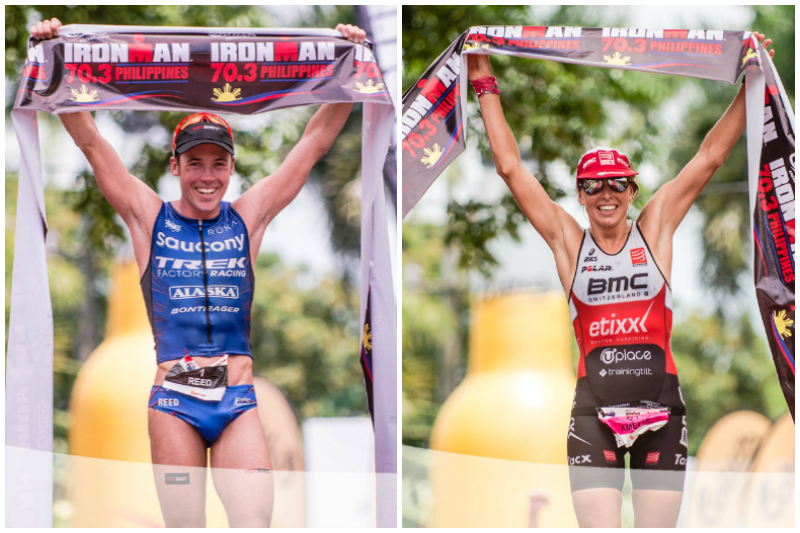 In scorching conditions where more than 2700 athletes toed the start line, Tim Reed of Australia wins his 3rd consecutive Ironman 70.3 Philippines title.  Kiwi Amelia Watkinson is once again victorious in the Philippines on his comeback race in Asia, dominating in a wire-to-wire victory.   Watkinson won 2016 Bohol 5150 on her last race in the Philippines. Once on the bike course, Reed immediately served notice on the field by pushing the pace on the bike, faster than anybody else.  Reed grabbed the lead on the first 2km.  Fisher, Betten and Mendez tried to keep pace, but were dropped on the lead group.  Reed padded on his lead gradually and was able to post the day’s best bike split at 2:01:51.  Fisher was 2nd on T2 with the 2nd best bike split at 2:06:43.  The chase group of Tim Van Berkel (AUS), McMahon and Mendez entered T2 together, 8 minutes behind leader Reed.

With a 5 minute lead on Fisher, Reed maintained that lead on the halfway mark of the 21km run.  The fastest runner on the course though was the Mexican Mendez, catching Fisher just after the halfway mark.  By km 17, Mendez was able to cut his deficit to Reed by half but would run out of mileage.   Reed would win in 3:54:07, a 2:38 margin over Mendez.   Mendez had the day’s best run split at 1:16:55.  Fisher completed podium by finishing 3rd at 4:00:20. Watkinson did not sit on the lead and worked to increase the gap over the chase group.  Over the whole 90km bike course, Watkinson was not threatened, and only Morris could keep up and despite that, could only muster the 2nd best bike split among women at 2:20:54.   Watkinson had the women’s best split at 2:19:55. Thilstleton registered a 2:24:02 split despite a bike spill.

Watkinson never looked back upon exiting T2 for the run, and got stronger despite the scorching run course.   With a year-round training in temperate Thailand last year, and winning a bunch of races in the Asian circuit, the switch in the cooler climate of Europe definitely did not affected her in this race.  Amelia posted the best run split among women at 1:34:22, enabling her to win in 4:29:17, a 6:36 winning margin over Aussie Jacqueline Thilstleton.  Morris was able to hang on to 3rd place, holding off a charging Kirra Seidel.