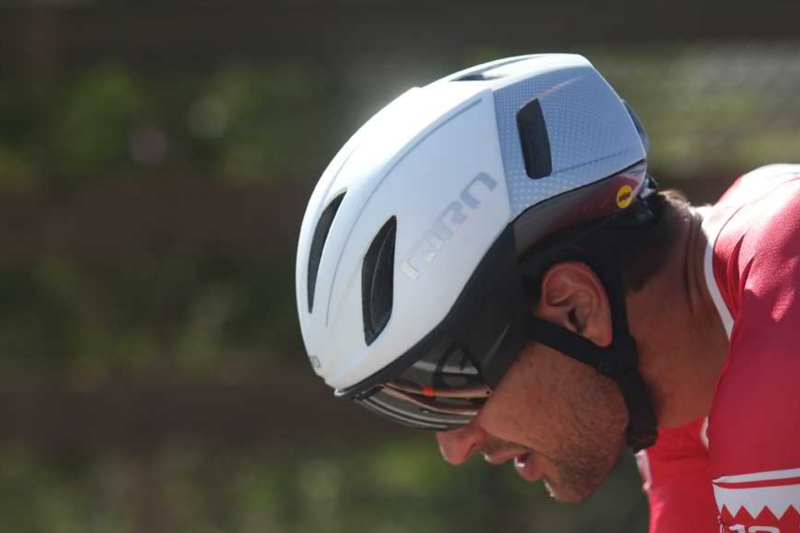 Giro’s latest aero road Vanquish helmet is an upgrade to its older brother, the Air Attack.

When Giro released the Air Attack five years ago, it was given credit for creating the aero road segment in the helmet category.   With no long tail, crosswinds and head movement had little effect on the Air Attack, at least that is what Giro is trying to accomplish with the short tail design.  While its bowling-ball shape drew mixed reactions among cyclists, riders and other  brands took notice, and today aero road helmets are very much a big category.

Five years later, Giro releases the  Vanquish to replace the Air Attack line.   It was first seen in the Tour de France this year being worn by Katusha-Alpecin and BMC Racing at the Tour. Compared to the round Air Attack, the Vanquish is considerably more elongated, similar to Trek’s Ballista or Specialized’s Evade.  The Vanquish features heavily sculpted internal air channels, and huge ports at the rear. The big rear center ports in particular are a departure from the Air Attack. Below is part of Giro’s release:

The Vanquish™ MIPS helmet is the pinnacle of performance road cycling helmet technology. The science of air flow, and the art of mastering it, dictated the helmet’s silhouette and ventilation designs from the beginning, with months of aerodynamic development, dozens of iterations and extensive pro rider testing. The result is Vanquish MIPS—the ultimate aero road helmet.

This no-compromise helmet is packed with progressive features designed to enhance your ride, from best-in-class aerodynamic efficiency, to exceptional ventilation, to innovative solutions in head protection. Whether you’re hammering solo off the front, smashing the bike leg of an Ironman or laying down maximum wattage in the dash to the finish line, the Vanquish shapes the wind to work for you.

See related: Video: Step by step of a bike fit

Also mentioned was its claim to be faster and cooler than its predecessor.   From first look, the Vanquish directly addresses one of the Air Attack’s major shortcomings: ventilation. Four  vents up front scoop air and shoot it over your head, releasing through the six rear vents.   It won’t compete in heavy ventilation with the likes Giro Synthe, but for a aero road helmet, its a big improvement over the air attack. Some of the features are:

Available online via Giro.com, the new Vanquish MIPS retails for $275.