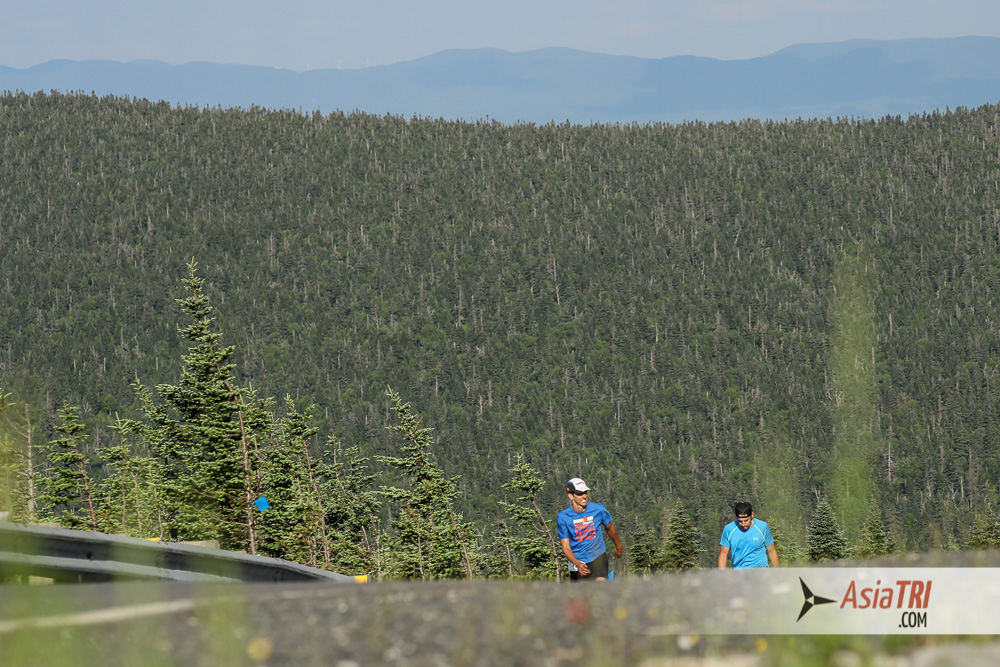 Everything you need to know to compete in this extreme Triathlon

The inaugural Canadaman / Woman Xtreme Triathlon was a stunning success. Following the line of the Xtreme Triathlon series (Norseman, Swissman, Celticman and Stoneman), the challenge in Quebéc led athletes to the limits, with the finish at the highest peak in the region, Mont-Mégantic, where the astronomical observatory is located. Our photographer Wagner Araújo was there and unlocked the secrets of the logistics of the competition held in the city of Lec-Mégantic.

Lac-Mégantic became famous in 2013 for the extremely serious train accident that destroyed much of downtown and left dozens dead. After North America’s greatest railroad tragedy, locals came together to rebuild the city from the ashes, literally. Since then, a lively Boulevard has emerged where the blast had been, with a large arena for Ice Hockey (great sport passion of the region), right next to the Center Sportif Lac-Megantic. This beautiful gym is the venue for the race-kit claiming, race briefing and the post-race CanadaMan Awards.  The region is taken over by forests and roads filled with rolling hills and long slopes. In addition, there is, of course, the beautiful Lake Mégantic, which gives its name to the city and is its main postcard photo. The swim leg occurs right there. 1.1 Arriving in the region

260 km from Montreal and without airports close by, the best way to get to the Lake is by driving from Pierre Elliott Trudeau International Airport (YUL). Montreal does not receive flights direct from most Asian cities, so you can fly to Toronto via Air Canada or Latam and then catch a fast connection or make connections in cities on the east coast of the USA such as New York, Washington, Detroit and Chicago. From Montreal airport are about 3h30 to 4h direction, the first 50km in the metropolitan area of ​​Montreal with plenty of congestion. Then the road is quiet. Half way you exit the great highway and start your way down smaller roads, past charming villages. Watch out for the speed limit, which is usually slower than here in Brazil (100km / h on the highway). You will need a car for the race anyway, as we will mention later, so rent is inevitable.

This point is perhaps the biggest problem of the race, as there are few hotels in the region, not yet very touristy. We stayed in the lovely Les Victorines. The hotel was a family mansion that was renovated and turned into an intimate but very good hotel. Facing the lake, you can even practice swimming out of there. This hotel is just over 2.5km from the city center, where are all the restaurants, shops, conveniences of the city. The most practical hotel in the city center is Motel Le Quiet. Also about 2 km away is the Hôtel Motel Le Château, a slightly more structured option. Finally, the B & B L’S-en-Ciel has a very receptive staff and simple yet well-maintained facilities.

A very interesting option is to look for a property on the AirBnB rental site, cheaper than hotels and with more options downtown, in addition to many seasonal homes.

Considering the size of the city, there are good food options in the tiny village. Highlight for the exceptional Mange ta Main. This petit restaurant has a special menu every day for lunch, running from Monday to Friday. On Thursdays and Fridays it is open until 20:00. If you usually feed after this time, there are very few options. The best of them, without a doubt, is Le Musi-Cafe, the best pub in town, but with good food and hearty dishes. There is also the best for the celebration in the post-test. But remember, the kitchen closes at 9PM, except Thursday through Saturday when the kitchen closes at 10PM. The bar is open until the last customer from Monday to Monday.

Two other restaurants that caught our eye were the Mexican Le Citron Vert and the Italian Le Renato (great for a pre-proof dough), both with good food and good service. If you want something more sophisticated, such as a fine dinner with a good wine, Les Petits Plaisirs du Lac offers a charming, really very nice option.

For a quick snack or a coffee, the best option is the Cafe Bistro La Brulerie, right near the arena. The only 24 hour option is the Tim Hortons coffee shop, the Canadian Starbucks, which is on the main street.

If you’ve never eaten, be sure to try the Poutine, traditional Quebéc dish, even if there’s an after-taste. It is crisp with cheese and a special sauce, in its classic version. One true classic!

In the days before the race it is possible to cycle and run around the lake itself, which has a marked lap of just over 40km. In general, drivers are extremely polite and respectful. For swimming, there is the swimming pool of the Center Sportif Lac-Megantic and the lake itself, always calm and clear. For those who prefer running in the trail, present in various parts of the competition, there are numerous trails practically in all directions of the city.

Unfortunately, there is no bike shop in town, but we found a mechanic at the hotel we were in and one during the pick up of the race kit and race briefing. For this race it is recommended that you or your group have some knowledge of how to assemble diassemble the bike, in addition to basic tune-up and adjustments, since there is no help in the course. Take extra tires and tools as well.

Like other iron distances of the Xtreme series and ultra-Triathlon tests, such as Ultraman and UB515, Canadaman has no hydration booth, either on the bike or in the race. Thus, each athlete must have a staff and a vehicle, which will provide all the support (food and hydration) during the race. In addition, it is mandatory, in the last stretch of the race, on the tracks leading to Mont-Mégantic, that the athlete be accompanied by a support staff running at his side. The 3,800m swimstart is calm and quiet, arriving with the day dawning. This year we had a beautiful moonlight to watch the athletes. In a straight line and easy to navigate,  even with small waves, swimming is sure to be the quietest part of the event. The use of triathlon wetsuit is permitted.

The course has more than 3,000m of accumulated elevation in the whole 180km leg. Much of the course is rolling hills (up and down), with very few flat stretches. Many athletes opted for clipped-on aerobars in  road bikes, mainly because of the greater ease in the curves and sharp braking of the rapid descents. Although allowed, disc wheels are not the best profile for the event. The bike leg begins with a drive back along the lake about 70km and then on to T2, which lies almost on the US border in the state of New Hampshire. Uphills and more climbs are the usual, so it is essential to train on a lot of climbs and descents. Skill in selecting right gearing is key to not waste time. Throughout the course, in small villages, the locals had an active participation, encouraging athletes and providing help and food. Save some gas for the final, because the last 20km are very hard. The transition in T2 is one of the highest ascents of the race.

The 42.2km run takes place on stretches of asphalt and dirt. As soon as they leave T2, the athletes enter a 3km trail, then face another 12km run on asphalt (on the same course of cycling, but in the opposite direction). From there the up and down begins. In km15 comes the section called Wild Canada, where athletes travel in a very remote region with difficult access by car (unless it is a 4X4, so consider this option when making your lease in Montreal). In km 25 comes the moment to enter the Park of the Mont-Mégantic and these are the two biggest climbs of the race. First up is the huge cell phone antenna, then at the peak ahead is the observatory and the arrival. At this point, it is practically impossible to run the whole time, first by the slope of some stretches, second by the technical difficulty in the trail. Many athletes have chosen to use batons in this final stretch, which can be picked up in their support car as soon as the stretch begins in the park, since the staff must find the athlete there. Remember to wear cold-weather clothes if you plan to finish the race after 8:00 p.m. (the start is at 4:30, and the limit is 23:59:59). Also leave food and hydration for post-race grub in the support car, because, when you return to the city, almost everything will be closed. Remember that the return arrival to Lac-Mégantic takes about 1h by car. First you should get off the bus from the top to the parking lot (no athlete cars are allowed at the top, and then drive back to the city where the start was.

For the support crew and companions, there is the Sprint distance race on Saturday, so everyone can attend the event!

In the region, one can do some boat rides and trails, besides some interesting cities, like Sherbrook. An interesting option is to return to Montreal and spend a few days in the city, with a pedal on the Julle Villeneuve Formula 1 circuit and a view of the Olympic stadium. The city is still famous for its historic center where bars and restaurants are concentrated.

Quebéc is the world’s largest producer of Maple Syrup, the famous Canadian natural sweet syrup. Be sure to sample this typically local delicacy and bring home a pot or two.

* Information subject to change by the organizers without prior notice

How to Nail the Half-Ironman Taper