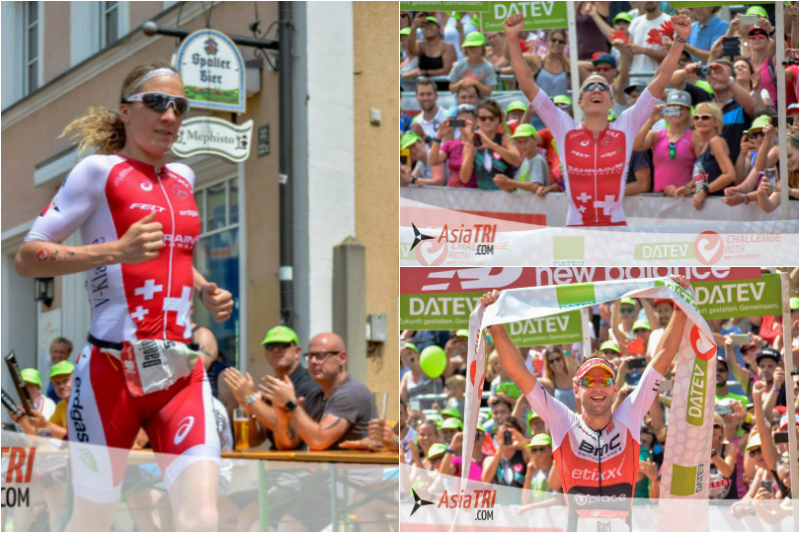 On challenging race conditions, where heat and winds stamped the whole of one of triathlon’s historic course, Swiss Daniela Ryf and Belgian Bart Aernouts came out on top, winning their respective categories in 2017 Challenge Roth.

Despite high expectations for Ryf to break Chrissie Wellington’s record in an iron-distance event, her finishing time of 8:40:03 still stands as an absolute world class time.  Her back problems this season prompted her to cool down the expectations and have to publicly call-off such attempt, and the hard race conditions definitely did not help in maintaining such goals.  At kilometer 15 on the run course, I wasn’t sure how my legs were going to manage to the finish line”, said Ryf at upon completion. “Without the spectators I never would have made it.”

Expectations though would rise up during the race.   Ryf would come out the water first with a women’s-best 52:34 swim, which gave her a 23 seconds lead on pro rival Heather Wurtele of Canada, 5:43 on Laura Siddall of Great Britain, 5:49 on Martina Dogana of Italy, 6:03 on Steph Corker of Canada, 8:47 on Corina Hengartner of Switzerland, and 8:58 on Lisa Roberts of the USA. Ryf started the run at a very respectable split of 39:05 over the first 10k.  But that pace would still not be enough to overhaul Wellington’s pace over the whole marathon (2:44).  By the half-way mark, Ryf had ran a 1:26:57, a 2:57 marathon finish, which signaled the end of the attempt to break Chrissie’s record.

Despite that, Ryf would still dominate the race at that point; a 15:46 lead on Laura Siddall (GBR), 20:11 on Yvonne Van Vlerken (NED) and 25:01 on Lisa Roberts (USA). “At kilometer 15 on the run course, I wasn’t sure how my legs were going to manage to the finish line”, said Ryf at upon completion. “Without the spectators I never would have made it.”

The podium all featured women who broke the 9-hour mark.  Runner-up Laura Siddal (8:51:38 hours), who ran a similar marathon as Daniela Ryf, stayed under the 9-hour mark. As well as the American, Lisa Roberts (8:57:14 hours) who with a super marathon pushed Roth’s  favorite, Yvonne van Vlerken back to fourth place.

Falling behind in the swim, Aernouts literally plowed through the field in humid, hot temperatures. Coming 23rd place out of the swim, Aernouts passed several competitors along the 180 bike kilometers and came in 4th place onto the run course. His 2:44:10 marathon was the day’s best, and enabled him to go sub-8, a 7:59:07 finish that only illustrated the day’s harsher conditions compared to last year.

Aernouts, a noted duathlon specialist, occupied eighth place in Hawaii last year. In May he triumphed over the long distance in Lanzarote and became the second Belgian to triumph in Roth. Exactly 20 years ago, Luc van Lierde won on the exact same spot with a worlds’ best time. But this wasn’t about best times. Instead it was about a really exciting race. Until the 33 year old from Antwerp took over the lead, two Germans had been dominating the happenings. Nils Frommhold seemed to be holding true to his favorite role for a long time, however had to give up after 160 kilometers on the bike due to a fall. He collided with a female athlete doing laps on the course. He remained fairly unhurt, but his racing bike was no longer of use.

At first, long-distant rookie, Maurice Clavel, profited from Frommholz’s bad luck as he overtook the lead and was even able to increase the distance during the first few kilometers on the run course. But then, around kilometer 20 it showed that a master of the middle distance isn’t automatically a master of the long distance. At least not at first. The youngest in this professional field was able to save himself on the last groove, coming in third (8:04:53 hours). He had to make several walking and stopping pauses, “went through hell” as he put it afterwards and only reached heaven at the end, “two meters before the finish line”.

He was overtaken along the way from last year’s second place winner, Joe Skipper who had a similar race strategy as the winner Aernouts: mediocre in the water, strong on the bike and super strong on foot. The bottom line though was that he was exactly 8:03:00 hours underway and he definitely could have been a half a minute faster had he not stopped right before the finish line in order to shoot a few selfies with family and friends!

Not only were the top three greeted with standing ovations in the Roth Triathlon Stadium, it was especially emotional for fourth place winner, Timo Bracht, 41, who ended his professional career at the finish line. “I had a super competition”, the athlete from Eberbach recognized. During this very late phase of his career, he managed to better his personal best performance on the bike course. The marathon was extremely hard for him though. Aside from the last leg in Buechenbach to Roth: “the kilometers were suddenly flying by much too fast”, he said at the finish line.