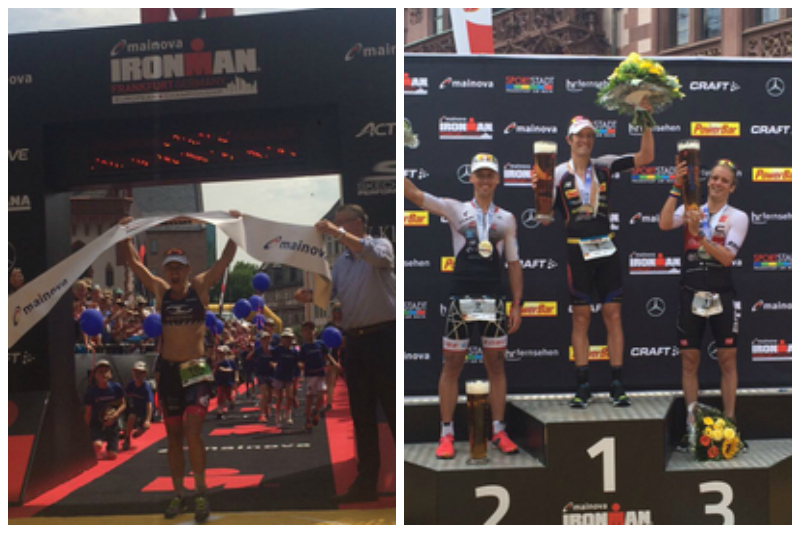 Sebastien Kienle of Germany took his 3rd Ironman Frankfurt win, and 2nd consecutive by beating fellow countryman Andi Bocherer, winning in 7:41:42.  Kienle’s lead over Bocherer was 4 minutes and 25 seconds.   The finishing time is the 4th fastest iron-distance finish, and 2nd fastest Ironman-branded event, but has to be aided by what commentators called a bike course that was 3 kilometers short of the 180km standard course length.

Still, Kienle is coming into form as the battle of record holders in Kona looms (with Frodeno and Sanders).  Kienle combined his race-best 4:02:22 bike split and 3rd best marathon of 2:45:09 to defend his title after coming from behind in the swim again, with a deficit of 4 minutes and 27 seconds.  After the fast bike split, Kienle made sure to put a gap between him and Andi, surging on the early kilometers of the marathon.   Bocherer ran out of miles last year in placing runner-up to champion Kienle, with only a 57 seconds deficit to the latter.  “The memories of last year were quite fresh in my mind,” he told Ironman.com.

Patrik Nilsson (SWE) ran a blistering race-best 2:40:58 marathon to round out the podium. In the women’s race, it was no surprise that former British national team swimmer Lucy Charles led after the swim, exiting out at 48:29.  That gave Charles a 4:42 lead on Anja Beranek (GER), 4:47 on Katja Konschak of (GER), and more than 7:45 on Magali Tisseyre of Canada, Sarah Crowley (AUS), and Michaela Herlbauer of Austria.

Charles, on a hot streak bouyed by wins in Ironman Lazarote and the Championship at Challenge Samorin-Slovakia, had almost 8 minutes over eventual winner Aussie Sarah Crowley.

Crowley immediately worked her way in the bike, posting the women’s best 4:40:42.   That trimmed the deficit at T2 to Charles by more than five minutes, despite registering 2nd best split at 4:45:08.

In the run leg, Crowley methodically chopped off Charles T2 lead of 3:52.   Crowley made the pass right after the halfway mark of the marathon and never looked back.