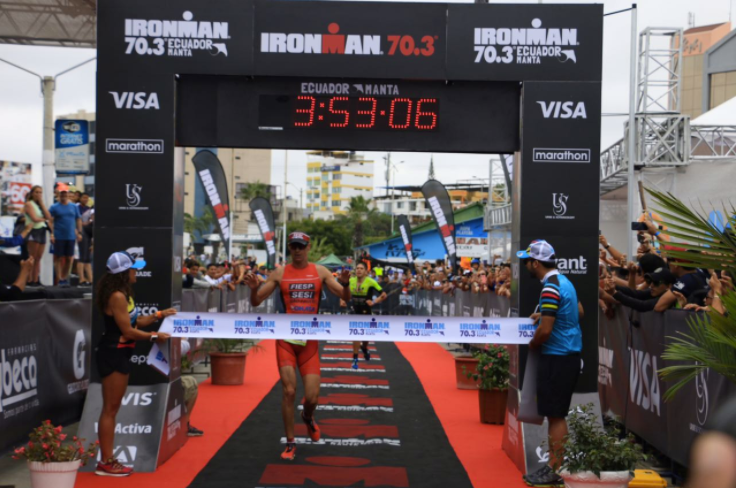 On a thrilling sprint finish, Brazilian Reinaldo Colucci won over Colombian Carlos Javier Quinchara Forero of Colombia to take the win at Ecuador 70.3 by a 2 seconds margin.  In the women’s elite category, Kelsey Withrow of the United States led wire-to-wire  to win in 4:26:11, a 9 minute 31 second victory over Diana Castillo of Colombia.

In a race that was forgiving in weather conditions, overcast and presence of little wind, Reinaldo Colucci won in 3:53:07, a mere 2 seconds margin over runner-up Quinchara Forero, who blasted his way to a race-best 1:15:30 run.   The win enabled Colucci to earn a slot at the Ironman World Championships in Kona.

“During the swim I tried to position myself in front of the group to leave in a good place for cycling.  In the bike leg, in a short we were only five athletes in the lead pack and it was clear that the winner of the day would be among us.   Unfortunately, countryman Igor Amoreli suffered a fall and was not able to continue.  I tried to hydrate and feed myself well and in the last 20kms I increased the pace along with Brzailian Fernando Toldi.  We were able to open a small advantage and we approached T2 with about a minute lead over the chase group.”  Colucci recalled.

Trailing by a minute, Forero was able to run together with Colucci by 15km.   They ran together till the carpet at the finish line, were a wild sprint finish saw Colucci hold the tape first.   Forero would finish in 3;53:09.   Grabbing 3rd place podium was Fernando Toldi (BRA) at 3:56:38.

“After reaching me a little after the 10km mark, I did not let myself be shaken, I kept my concentration and ran in the glue of his steps.  When he increased the pace I would respond immediately and went that way until a few meters to the finish line when I used my speed to start in the final sprint and win the race by a few steps.” said a thrilled Colucci over one of the closest race in Ironman 70.3 history.

In the women’s race, Withrow immediately served notice of her perfect day by coming out of the water in 26:21, an 8-second lead over Castillo and 3 minutes over Elizabeth Bravo of Ecuador.

A women’s best bike split of 2:28:02 gave Withrow a nearly-insurmountable 10:05 lead on Castillo.  The other contenders were over 14 minutes off the lead.   Withrow’s split was 6 and a half minutes faster than the next best  woman cyclist on the course.