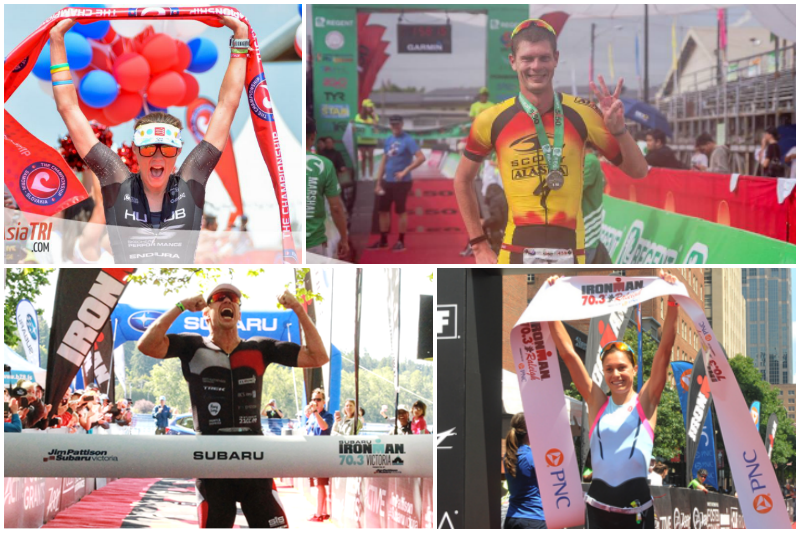 CHALLENGEFAMILY is proud to announce that Lionel Sanders (CAN) and Lucy Charles (GBR) have been crowned the winners of the inaugural THECHAMPIONSHIP 2017, with both athletes claiming their share of the 150,000 Euro prize pot.
More than 900 competitors from 57 nations lined up alongside the Danube River – in the shadow of the incredible x-bionic® sphere – at 9am this morning (local time) for the start of the middle-distance THECHAMPIONSHIP 2017 (1.9km swim, 90km cycle, 21km run). Conditions were favourable with light winds and a temperature of 20 – 28 degrees celsius.

For a full recap of The Championship, CLICK HERE.

Sam Betten (AUS) dominated his way with a wire-to-victory on his way to grabbing his 3rd consecutive title at the 5150 Subic Bay, Philippines.  Dimity-Lee Duke (AUS) finally captured the women’s elite title, after finishing 3rd and 2nd the previous two years.

For a full recap of Regent 5150 Subic Bay, CLICK HERE.

Andrew Yoder (USA) and Tylor Butterfield (BER) rode away from the field throughout the open half of the bike with Yoder being the aggressor out front. Closing the final 30 miles strong, Yoder carried an over three-minute advantage on Butterfield after the bike.

The gap remained much the same between the lead pair for the first half of the run when Yoder showed signs his pace was fading. Butterfield narrowed the gap to less than a minute with 3 miles to go and the inevitable lead change occurred shortly after mile 11. Butterfield would pad his lead to close to two minutes at the conclusion of the 13.1 mile run to claim the victory.

See also:  S2 Sprint Distance triathlon series kicks off in Subic Bay, Philippines as a side event to 5150

In the women’s race, Lauren Brandon (USA) had a clear lead of over three minutes on her closest rivals after the swim and would dismount her bike sporting almost a four-minute gap to second place.

Stephanie Roy (CAN) was looking at a five-minute deficit and third overall after the bike, threw down the fastest run on the day. The Canuck took the lead at six miles and never looked back until she clutched the finish line winners banner for the win.

Marko Albert (EST) had one of those perfect days on Vancouver Island in the province of British Columbia, Canada on Sunday. He was first out of the water and managed to build a 4:21 advantage on his closest rival on the bike as a result of punching out the race-best ride. Albert would cruise to the finish line to claim the victory by a winning margin of +2:27 on Taylor Reid (CAN).

Kelsey Withrow (USA) would exit the water with the leader and pinned it once she hit the bike course. Carrying a two and half minute lead at the end of the 56-mile bike, Withrow hit the run with only Jen Annett (CAN) able to better the leaders pace. Withrow held off the challenge by Annett late in the run to claim the win in Victoria.

See also:  For the First Time in Three Years, the Ironman World Championship Heads Back to Kona with 2-Day Race Format