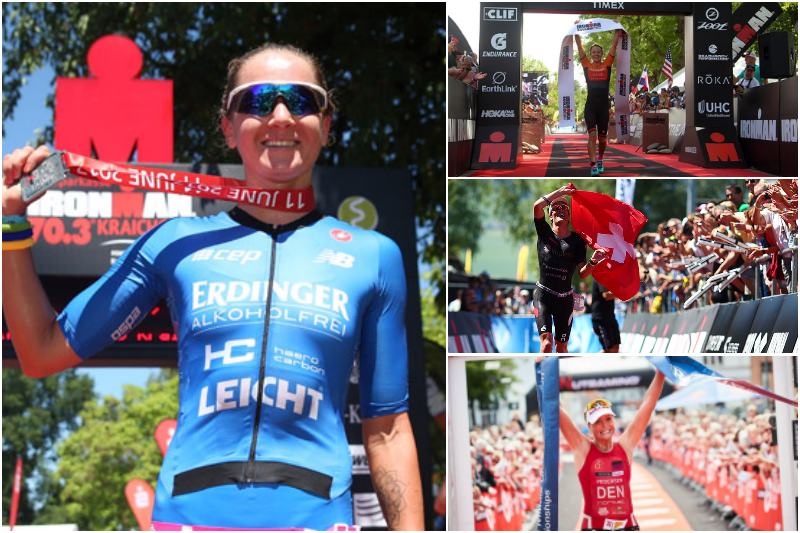 A busy weekend for the triathlon as a bevy of events were held all over the world.   AsiaTRI was able to cover the Ironman Asia-Pacific Championships in Cairns, Queensland, Australia.  See the recap and photo gallery here:

Rio Olympian Ryan Fisher made it to the top to win the Lixil IRONMAN 70.3 Japan in Chita following a third placing recently at Busselton, Western Australia and second placing at Western Sydney late last year.

The former ITU athlete took advantage of his swimming prowess to lead by more than two minutes out of the water in a slick 23:10, but put the hammer down on the bike with his 2:10:22 effort on the challenging 90km ride enough to put his into clear air. He was able to run within himself with his 1:19:21 effort sufficient for a 3:58:11 tally—the only athlete under the four hour barrier—and his first IRONMAN 70.3 victory.

Philippines-based Aussie Mitch Robins enjoyed a dog-fight with Seychelles professional Nick Baldwin on the run, edging him for second place, while American Brad Williams, who made his move on the bike, was unable to hold the pair off on the run.

The women’s race was a one-on-one battle with Aussies Monica Juhart and Laura Dennis enjoying a four minute lead over the third placed female pro Taiwan’s Li Shiao Yu at the end of the swim. By the halfway point of the bike that lead was over 10 minutes and still eight minutes at T2. The Australian pair battled it out for much of the day before Dennis got the better of her compatriot on the run to claim her first IRONMAN 70.3 title over Juhart with Li rounding out the podium.

Ironman Boulder
Tim O’Donnell was in a class of his own on Sunday. The former U.S. Naval Officer recorded the race-best swim, bike and run splits on the day to grab the IRONMAN Boulder title. O’Donnell rode solo for 112 miles and dismounted his bike with a seven-minute advantage. That would be as close to the front runner anyone would be for the remainder of day as O’Donnell padded his lead throughout the 26-mile run to record a 21-minute winning margin over his closest rival.

In the women’s race, it was apparent from early into the bike this was going to be a two-women race. Rachel Joyce (GBR) was the leader in the first half of the bike when Heather Jackson (USA) forged her way towards the front to challenge the Brit. It took Jackson a few miles to shake the pesky Joyce, but the American managed to break free of Joyce’s grasp in the late stages of the bike to carry a three-minute advantage coming out of T2.

Once on the run, the pair were evenly matched until seven miles when Joyce started to claw her way back towards the front of the race. At 17 miles into the run, Joyce made the pass for the lead as Jackson was unable to respond to the challenge. Joyce claimed the win, grabbing the finish line banner by a winning margin of 7:10.

See also:  Tri-Factor is back with First Race in Vung Tau, Vietnam

Challenge Denmark
Saturday was a truly spectacular day in Denmark as the ETU European Middle Distance Triathlon Championships took place in a sunny and festive atmosphere in the “Sports Capital of Denmark”, Herning. The many spectators witnessed a truly excited, and even slightly surprised, Patrick Dirksmeier from Germany take the European title in the PRO Men’s race. And to top it all off for the organisers, the local triathlon darling Camilla Pedersen took the PRO Women’s European title by a convincing margin.

“This is just incredible. It’s just amazing to be racing on home soil and with this amazing atmosphere,” said the newly crowned ETU European Middle Distance Champion, Camilla Pedersen from Denmark.

Even though, she had suffered a minor bike crash a couple of weeks ago and didn’t have the best preparations coming into the race, she won by a 3:04 minute margin down to her immediate follower, Laura Siddall (GBR), who did, however, not compete in the European Championship but in the Open Race, leaving today’s 3rd place to Maja Stage Nielsen, who is then, for the second executive year, the ETU European runner-up, as she also finished 2nd in Poznan last year at the ETU Long Distance Championship.

Dirksmeier: “The greatest moment EVER, EVER, EVER!”

On the PRO Men’s side, everything was set for the German Andreas Dreitz to defend his title from last year’s Challenge Herning, but on the bike, which is his usual superpower skill, he suffered from pains in his neck and had to abandon the race, leaving the Danish surprise of the race, Anders Christensen, in the lead going into the run with fellow Dane Kristian Høgenhaug and German Patrick Dirksmeier right behind him.

“It’s incredible. Am I really the European Champion now? I can’t believe it. I thought Andi would be the strongest athlete, but I he didn’t have a good day, so I had to take the chance. I was definitely going for the podium today, but I didn’t know I would be able to take the win. This is the greatest moment EVER, EVER, EVER, EVER! The course had perfect roads and rolling hills, but the legs hurt, because there are so many good athletes here,” said the new European Champion after the race.

There was Swiss domination at the IRONMAN 70.3 Switzerland: in both races, four athletes in the top five came from home soil.

Daniela Ryf and Ruedi Wild controlled the race at the 10th edition of the IRONMAN 70.3 Switzerland. They both took the win in a very Swiss-coloured race thanks to strong running performances on a hot day, but they celebrated their victories in a completely different way.

After about 40 kilometers of the bike course, a Swiss pack of four athletes bound together in the men’s race to break away from the rest of the field. Wild and his fellow countrymen Manuel Kueng, Jan van Berkel and Sven Riederer made their way together towards T2. South African James Cunnama was 2:20 behind those four when he hit the second transition, co-favorite Ronnie Schildknecht was about 4 minutes down. It looked like this Swiss train at the front was unstoppable. While Wild, already winner in 2015, had a solid run to take the win, Cunnama stormed on the second half of the course. He nailed the fastest split to take runner-up position.

In the women’s race, the storybook looked a bit similar as in the past few IRONMAN 70.3 events Daniela Ryf has taken part in. The Swiss dominator was among the leaders during the swim, paced herself very solid on the bike, and let the hammer go down on the run. Ryf didn’t complain about Nina Derron on the bike, knowing that her momentum would come later on the run. After 14 kilometers, the two-time IRONMAN world champ made the decisive pass to take her fourth win in a row in Rapperswil-Jona.

If there have been any doubts before, the Sparkasse IRONMAN 70.3 Kraichgau. powered by KraichgauEnergie can be taken as a final evidence how fit Sebastian Kienle is. Four weeks out of the IRONMAN European championship, Kienle wanted to have a hard final test for the showdown in Frankfurt. The result was a dominating win. In the water, he was only 1:40 down, and after about 20 kilometers of the bike he took over the lead. Although Germany’s Markus Rolli was working hard in runner-up position to keep the gap small, Kienle had a 6-minute-lead when he started the run. Third-placed Marc Duelsen was almost 10 minutes behind. Kienle had to deal more with the hot conditions on the run then with any athlete. He took his time to celebrate with the fans before Rolli and Duelsen battled hard in a sprint finish for second place.

Similar to the men’s race, Laura Philipp stormed to the front in women’s competition early. Like she had done at her wins at the IRONMAN 70.3 Mallorca and at the IRONMAN 70.3 Austria, she sailed away on the bike after a solid swim and didn’t slow down on the run. Philipp put almost 9 minutes on Dutch Yvonne van Vlerken on the bike and added another 2 minutes during the run. Surprisingly, Germany’s Lena Berlinger could stay next to van Vlerken all day long to round out the podium.

Winner of the Free Entry to Ironman Western Australia (Full) Announced
May 2, 2017