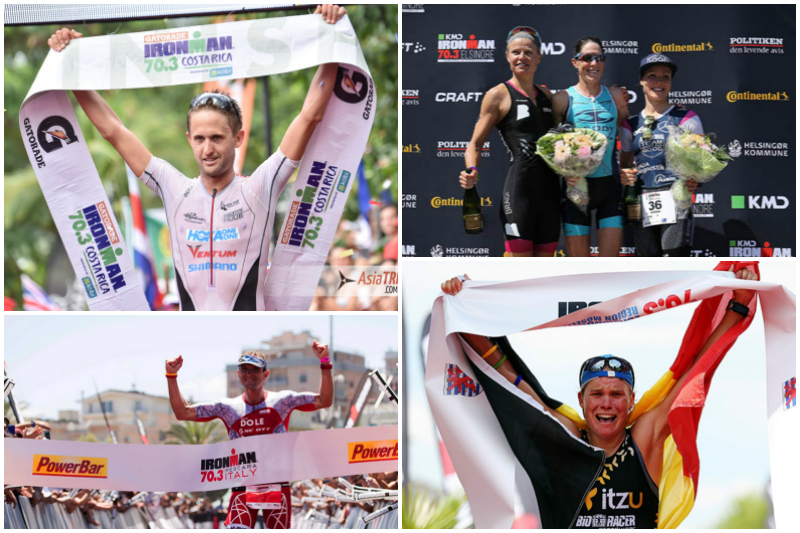 With the race run alongside the Castle of Kronborg, where Shakespeare set Hamlet, a day of high drama would have seemed appropriate for the KMD IRONMAN 70.3 European Championship, Elsinore.

Instead, two champions, Michael Raelert and Annabel Luxford, grabbed wire-to-wire wins and despite stellar fields of quality and depth, no serious challengers emerged. Raelert, the 2010 and 2011 IRONMAN 70.3 world champion, added his second IRONMAN 70.3 European title. He was fastest out of the water, rode with fellow Germans Andi Boecherer and Nils Frommhold to break away from the pack on the bike, and then calmly ran clear straight out of T2. His 1:14:36 was third fastest on the day and paved the way for an imperious 4:07 victory, more than 2:30 clear of Bocherer with Fromhold a further minute back.

Luxford, who has fashioned success across the range of triathlon distances, seems at her best at the IRONMAN 70.3. The Australian has gained nine IRONMAN 70.3 wins in four years plus five podiums including the world championship in 2013.

As usual she was first out of the water in 23:34, enjoyed some company from local Danish hopes Camilla Pedersen and Helle Fredriksen as the trio distanced themselves from serious threat on the bike, and like Raelert, strode away purposefully from the start of the run. Her 1:21:42 was easily best on the way to a 4:07:00 victory. She was simply in command throughout to win by 2:34 from Fredriksen with Finland’s Kaisa Sali third another minute back.

Weather Wurtele of Canada led the swim and put up a 1:37 lead over Daniela Sammler of Germany.  Trailing just behind Sammler was Yvonne Van Vlerken of the Netherlands, just 3 seconds back.

Van Vlerken, one of the favorites to win the race, suffered a bike spill and had to withdraw due to bruises and wounds.  Sammler biked the women’s best split of 2:36:39 to lead Wurtele by 4:31 going into T2. Kevin Collington was at or near the front of the race throughout the entire swim and bike legs in Costa Rica for the inaugural IRONMAN 70.3 event. The 2017 IRONMAN 70.3 Pan American champion displayed patience, letting three others lead the field for the 90 km bike ride. Collington wasted no time once the race hit the run. He would go on to claim the win on the strength of race-best bike and run splits, by a margin of 4:38 on his closet rival.

Check out the scenes from Ironman 703. Costa Rica as captured by AsiaTRI’s Wagner Araujo

Leanda Cave (GBR) didn’t panic when Dede Griesbauer (USA) took off on the bike, building a 1:46 advantage by the conclusion of the bike. It took Cave only 4 km’s to bridge the gap and take the lead as Griesbauer slowed on the run. The 2012 IRONMAN and IRONMAN 70.3 world champion proceed to pound out the fastest run on the day that propelled her to her first IRONMAN 70.3 win of the season.

French athletes shined under the Italian sun in the men’s race. In the swim, which was shortened due to strong winds and choppy water, it was on Julien Pousson to set the race on fire. Pousson reached T1 after only 14:29 minutes, leading a group of four. On the bike, his fellow countryman Cyril Viennot took over control for the rest of the day. Together with Swiss Manuel Kueng, Viennot embarked on a duo ride for about half of the course before he made his move. Taking a lead of a minute onto the run course, the strong runner secured his win on the sunny course on a hot day. Austria’s Lisa Huetthaler proved her strength on the bike one more time in Italy, but it was a Swedish shadow that got closer and closer with every step on the run. Camilla Lindholm was 8:33 down at the end of the bike stretch, positioned in third place being more than 4 minutes behind Tine Deckers (BEL) in runner-up position. Lindholm passed Deckers before she stormed off with the best split, behind Huetthaler. She made up almost 80 seconds on the final 5 kilometers and sprinted towards the finish line, only 3 seconds later than Huetthaler.

Belgian runners made their way at the IRONMAN 70.3 Luxembourg. In both the men’s and women’s race, strong bikers seemed to be on the winning track for a long time. On a warm and beautiful day, it was Germany’s Lukasz Wojt who impressed the most, reaching T1 about 2 minutes ahead of his chasers and pushing the pace hard on the bike. Although everyone was waiting for a big move in the strong chase group, Wojt held on to first place. He got off the bike with a lead of almost 3 minutes. The group behind him was full of strong runners, and Kenneth Vandendriessche from Belgium was the man to attack. At kilometer 8 he made the pass of the day to take the win. Bas Diederen (NED) fought hard to close the gap to the front, running into silver ahead of Tim Brydenbach (BEL). As expected before the race, Germany’s Katja Konschak was in front in the water, but it was Susie Cheetham who moved into the lead on the bike. She started into the run with an advantage of 3 minutes over Alexandra Tondeur, before the Belgian co-favorite started to grab more and more time. On the second half of the run, Cheetham struggled a bit while Tondeur stormed to the win with the best run split ahead of the Brit and Konschak.