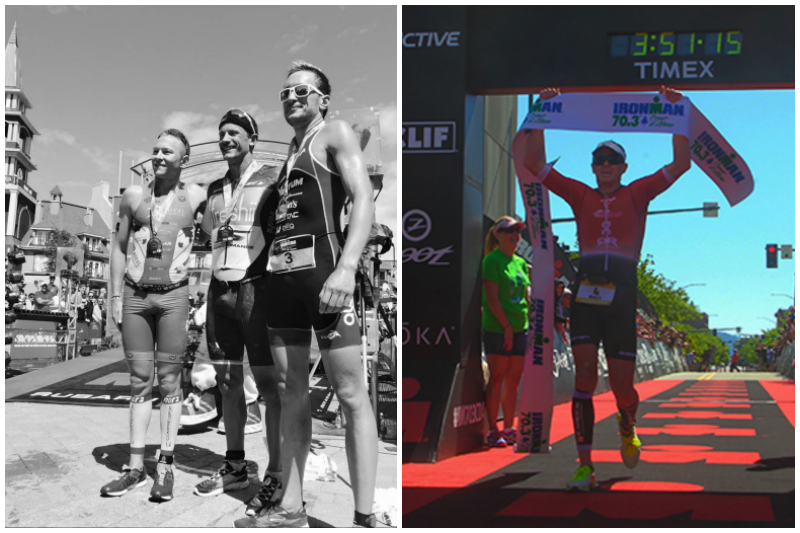 Matt Hanson (USA) came out of Lake Coeur d’Alene in eighth place, and looking at a manageable 1:36 deficit to the leaders heading out on the bike. Hanson made his way to the front of the race early and shared the lead with IRONMAN 70.3 world champions, Tim Reed (AUS) and Andy Potts (USA), as well as Christian Kemp (AUS) and Coeue d’Alene’s own Derek Garcia (USA). In the closing half of the bike, Hanson pushed the pace and headed into transition with leads ranging from :44 to 2:01 on his four pursuers. That would be as close as the men’s race would be as Hanson ran away from the field of talented runners to hoist the finish line banner by a winning margin of close to three minutes.

In typical fashion, Haley Chura (USA) smoked the swim and started the bike with a three-minute buffer to the next women. Jen Annett (CAN) used the fastest bike split on the day to narrowly edge out Chura at the dismount line at the conclusion of the 56-mile bike. The run started with 30 seconds separating the lead pair, but it was Chura who managed to surge to the front within the first two miles of the run. The gap between the two women yo-yoed between one and two minutes for the remaining 11 miles with Chura hitting the finish line with 1:57 cushion to Annett who finished second.

Lionel Sanders (CAN) came into the race as the man to beat and he lived up to all the pre-race expectations. Exiting the water only 2:40 down to the leaders was considered a win for the stealthy Canadian. Within 25 kms of the bike, Sanders was in the lead and steam rolled into T2 with a six-minute advantage on his closet challenger. Appearing to not be required to go all out on the run, Sanders put in a comfortable race-best run of 1:14:01 to grab the win at the IRONMAN 70.3 Mont-Tremblant.

Reigning IRONMAN 70.3 World Champion Holly Lawrence (GBR) used her patented knock-out swim and bike combination to set herself up for another half distance win of the year in Quebec. The Brit established an insurmountable eight-minute gap to second place coming off the bike and held off a late charge from behind put together by double Olympian and ITU star Sarah True (nee Groff) to take the victory.

See also:  Top Triathletes to compete in 2016 Ironman 70.3 World Championship to be held in Australia

Ironman announces partnership with superfrog to be first qualifier for military division at Kona
September 4, 2014