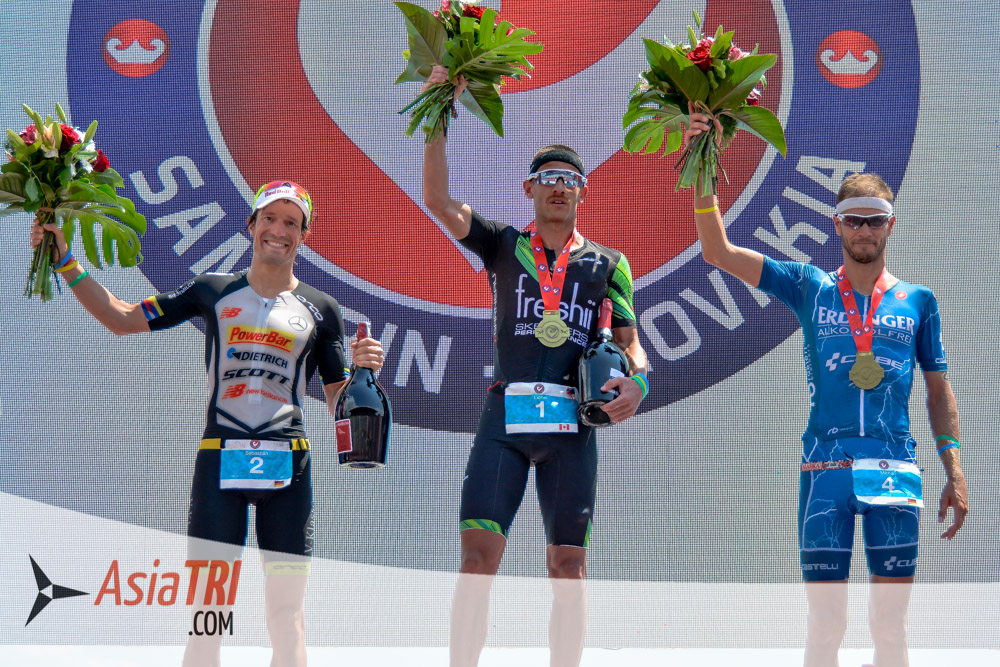 CHALLENGEFAMILY is proud to announce that Lionel Sanders (CAN) and Lucy Charles (GBR) have been crowned the winners of the inaugural THECHAMPIONSHIP 2017, with both athletes claiming their share of the 150,000 Euro prize pot.
More than 900 competitors from 57 nations lined up alongside the Danube River – in the shadow of the incredible x-bionic® sphere – at 9am this morning (local time) for the start of the middle-distance THECHAMPIONSHIP 2017 (1.9km swim, 90km cycle, 21km run). Conditions were favourable with light winds and a temperature of 20 – 28 degrees celsius.

“It’s amazing to see all these athletes competing so closely against each other on the race course,” explains CEO of CHALLENGEFAMILY, Zibi Szlufcik. “With a 20 metre draft rule on the bike leg, deliberately hosting the inaugural event here at the outstanding x-bionic® sphere, and after announcing the best line-up of professionals ever in the history of middle-distance racing, it is safe to say that we have delivered our promise to set a new standard in triathlon.”

Going into the men’s race, questions were raised as to how the short course athletes, such as Alistair Brownlee (GBR) and Richard Murray (RSA) would fare against the long course World Champion Sebastian Kienle (GER) and European Champion Andreas Dreitz (GER).

During the bike leg after a quick transition, Raelert overtook both Varga and Brownlee to take an early bike lead. CHALLENGEBAHRAIN winner Andreas Dreitz climbed his way up to second place but it was Lionel Sanders (CAN) and Kienle, who were 60 seconds off the lead at the 4km mark, who continued to close the gap throughout the bike leg.

On the run, which led athletes around the stunning x-bionic® sphere, the battle for the win switched constantly between the World Champion Kienle and multiple middle-distance champion Sanders, who both overtook double Olympic Champion Brownlee, who later had to retire from the race.

Both Kienle and Sanders were within an elastic band width of each other throughout the majority of the run. After a dramatic breakaway at 16km, however, it was Sanders who took the win with a time of 03:40:04. 3.     Michael Raelert (GER) – 03.45.34
Commenting on his win, Sanders said: “That was by far the hardest I have ever suffered after battling Sebastian on the run. Kudos to CHALLENGEFAMILY for introducing the 20 metre draft rule, I absolutely think that all races should implement the 20 metre draft rule as standard for fair racing.”

Ahead of the women’s race, with no clear favourites evident in the pro start line-up, it was to some degree anyone’s race to win. Three-time world champion Heather Wurtele (CAN), CHALLENGEMELBOURNE champion 2017 Annabel Luxford (AUS) and 2nd place in CHALLENGEMALAYSIA 2016 Radka Kahlefeldt (CZE) were all names to watch out for.  Emma Pallant (GBR – winner of Goria Challenge Mogán Gran Canaria 2017) and Lucy Charles (GBR – winner of CHALLENGELISBOA 2017) were certainly among those who were in the spotlight after their recent middle-distance triumphs and close racing.

On the bike leg, Luxford took the lead with Charles dropping down to third place, whilst Kimberly Morrison (GBR) put in a strong performance to climb up to second place 45km into the bike leg. Wurtele (CAN) and Rachel Klamer (NED) caught up with the pack and looked strong with the lead in their sights. At the 80km mark, Morrison had a 25 second lead over Luxford.

On the run course, Morrison started with a 53 second lead, but after a dominant start to her run, Luxford took, what seemed at the time, a comfortable lead.

Within the first 5km of the run, Wurtele had climbed up to second place to continue to reduce the gap between herself and Luxford, with Charles emerging on both their tails. Charles had a spectacular race and in the last kilometre stole the lead crossing the finish line in an impressive 04.14.32.

Commenting on her win, Charles said: “I can’t believe it. I could see that I was closing the gap on the run, but I didn’t expect to claw in the race win. Epic course, epic race and I really am over the moon. I think the 20m draft rule is great, and certainly works in my favour.”