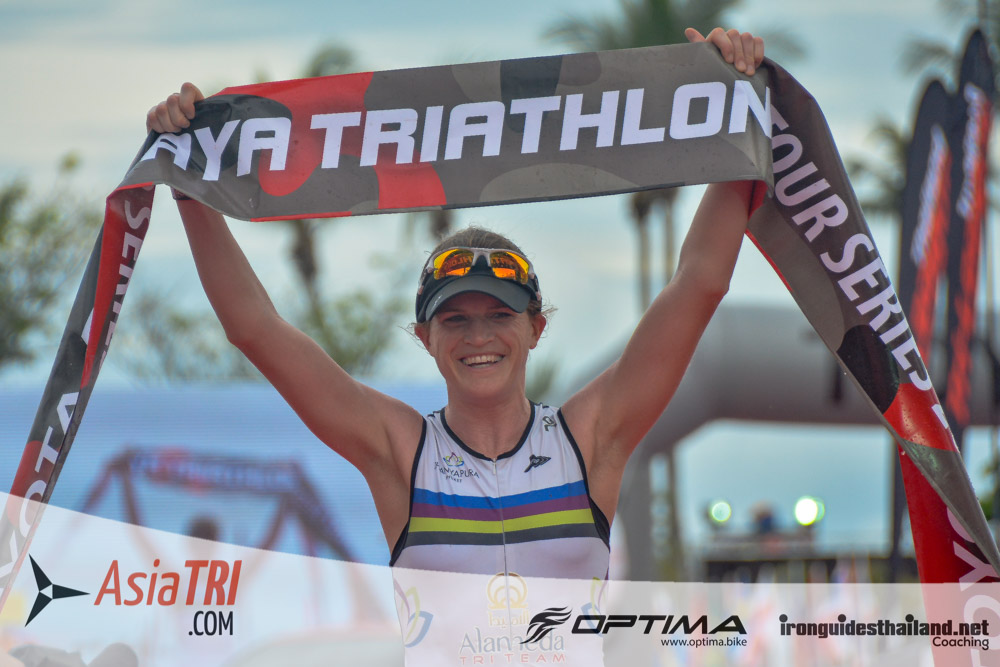 Before 2015, Eimear Mullan, 35,  out of   Portstewart Northern Ireland, was one of the rising stars in the middle to long distance triathlon racing circuit in Europe.   She was a three-time iron-distance champion and has also won half-distance races seven times.  A spate of injuries derailed her momentum in 2015.   In late 2016, Eimear and her husband, fellow pro Ritchie Nicholls moved to Phuket Thailand to train under Thanyapura’s Pro team.  We talked with Eimear after her mini-breakthrough win in Pattaya Triathlon, one of the legs of Thailand’s Tri-League series:

AsiaTRI: Every story has its beginnings, how did you start competing in triathlons?

Eimear: When I was younger I competed in a sport called Tetrathlon, it involves swimming, running, shooting and horse riding. It was over short distances and though I really enjoyed and got to a fairly high level I didn’t take it too seriously. Following that I went to university then worked and travelled and  kept generally fit. I started racing age group triathlons in 2007 and I raced my first professional races in 2011 while working as a teacher before going full time in 2013 when I joined Team TBB.

AsiaTRI:  You recently just won Pattaya Triathlon, tell us, how did the race went for you?

Eimear: Pattaya went really well for me. It was my first race since 2015 so I didn’t really know what to expect and I just wanted to complete it without hurting my recovering injuries. I swam quite well, I’ve worked more on my swim while I’ve been injured and it’s feeling a lot stronger than before. I took the lead quite early on the bike and held a good gap on to the run. It was my first attempt at running off the bike so I had planned to jog/walk slowly round but I think I went a little faster than planned. I was so happy to be racing and to win just made it extra special for me. AsiaTRI:  That was your first triathlon race since 2015, can you share how difficult it is to slowly go back into shape and also trying to make sure you don’t impede the recovery process?

Eimear: It’s been a long and difficult process both physically and mentally. The injury is (was) a hamstring tendonopathy and it started over 2 years ago. If I had been told it would take so long to recover I don’t think I would have had the patience to keep going. I kept trying various treatments, therapies, ideas and I kept trying to get back to some training. Each time I tried over the first 18 months everything would fall apart and I would be back at the beginning. Before coming to Thailand in mid November I took 10 weeks completely off, with no biking or running and very easy swimming with a pull bouy. When I arrived in Thailand I slowly started to introduce some easy training with  3min jogs and 30 min bikes. I managed to build my biking from there with just a few minor problems but the running has been much more challenging.
I found that because I hadn’t run properly for so long I picked up many other running injuries, including shin splints on both legs, achillies tendinitis, plantar fasciitis, back problems etc. and around the end of April I finally managed to jog relatively pain free and have been slowly building up from there. I still have bad days when running is out of the question but on the whole  things are improving and I hope they can continue to get better.

AsiaTRI: It has been 7 months since moving into Thailand, how it has been so far, assimilating the culture in Thailand?

Eimear: I absolutely love Thailand and the experience has been amazing. Ritchie and I have really adapted to the Thai culture and have loved every minute. I am so grateful to be able to be here as part of the Thanyapura Pro triathlon team.

Eimear: That’s a tough question, the food is all so good and it depends on my mood and the training I’ve been doing. I love papaya salad and green curry and I like going out for dinner with Thai friends as they always pick some amazing dishes that I don’t even know the name of. AsiaTRI: How has the weather affected you in your regular training, well compared to Ireland?

Eimear: The weather has been amazing and it was brilliant to spend the winter months in the heat and sunshine here in Phuket. It meant I could start slowly build up my training and I think that being in the heat and away from the cold European winter has really helped my injuries to heal.

Eimear: If 1 is injured and unable to train then I would say I’m around 3-4 on the scale. I have come a long way since November but I have a very long way to go until I’m completely injury free and really able to push in training and racing.

AsiaTRI: What are the immediate plans?

Eimear: I need to  continue with my rehab and take things one step at a time. I’ve been so patient and I guess I’ll have to be patient for a while longer before I can make any big plans.
Follow us

See also:  9 Most Insane Triathlons in the World -1

Video: How To Ride Steep Climbs Like A Pro