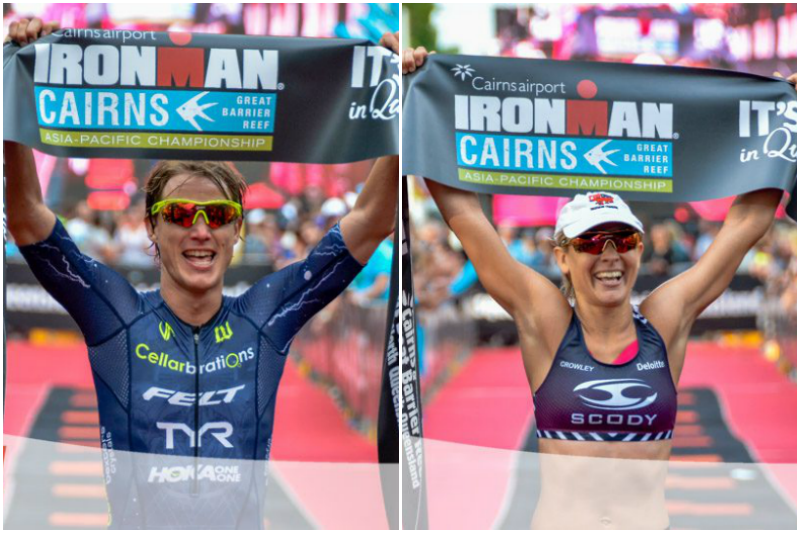 Near perfect conditions made for super-fast racing with Queensland athletes and training partners Josh Amberger and Sarah Crowley smashing both the men’s and women’s course records at the Cairns Airport IRONMAN Asia-Pacific Championship Cairns.

It was also a double for Brisbane based coach Cameron Watt, steering both Amberger and Crowley to the biggest wins of their careers.

In only his third start in an IRONMAN, Amberger upset much more fancied rivals with a near flawless performance in front of a very supportive Cairns crowd.

“I have never won a major championship, so to put it together on a day like this is amazing. Everyone talks about how wonderful this race in Cairns is and all the guys that do it always seem to come back. I can see why, it was just unbelievable. One of the best, if not the best course I have raced on.”

“It was literally like a dream. I led out of the water, I was first off the bike and I managed to have good legs. I am still new at IRONMAN so I was unsure of the run pacing. I think I went out a bit too hard but managed to hold it together and run a really good marathon.

“I had a feeling I had the race wrapped up but I didn’t want to celebrate too early. The last two km was lined with spectators and being a Queensland boy to take this race out in front of a lot of family and friends and people who have watched my career over the last ten to fifteen years it was fantastic. Well done to the people who came here to support the race and thank you for getting me across the line.”

“Full credit to my coach Cameron Watt. I started with him in December last year and I have gone ahead in leaps and bounds. He has put a lot of work into both Sarah Crowley and myself and to have Cam here supporting us is unbelievable,” Amberger said.

Amberger will now travel to Europe to support his partner, Olympian Ashleigh Gentle and take some time out to consider his race schedule and whether to focus on the IRONMAN World Championship in October.

“I haven’t seen much of Ashleigh this year because she is very focused on what she is doing with the ITU circuit.  I am pretty excited to take this title and enjoy some time off and spend some time with her. When you race IRONMAN you cannot expect to have a race like that every time. A lot of guys who have had success in the past in Kona have left it awhile and gained experience in other races. There will be some expectation from the people around me to start in Kona but it is a bit too early to say if it will be this year,” he said.

A new course record is Sarah Crowley’s reward for revitalizing her racing career and seven years of loyalty to the Cairns event.

“I have been performing really well over the past six months in the 70.3 races and I went away with my coach Cam Watt to extend my running to long course and the work we have done on the swim has unlocked my whole race.”

“Coming out of the water up the front I don’t have to chase and hurt yourself in the first part of the bike by trying to play catch up and you can set your ride up better. It happened here, I was able to build through the ride and I really hammered the back end where I knew the race would be won. In the past I would have had to hurt myself out to Port Douglas to try and catch up. Taking that off the table has unlocked my racing for me.”

“This race is pay off for all the work we have been doing. I won the IRONMAN 70.3 Middle East Championship Bahrain at the back end of last season but it hasn’t got the status of a Regional Championship. This is definitely my best result. It is unbelievable and who knows from here.”

“I was pumped when I saw Josh out there in front and I couldn’t believe it. It was like ‘Far out’, then I saw the gap and It was like ‘What is going on?’ I love it. It was so good to see. Our squad is so positive. We support each other and complement each other at training. It is wonderful to see that Josh had the win in Cairns as well but there is gonna be a fight for who is top dog at training now,” Crowley laughed.